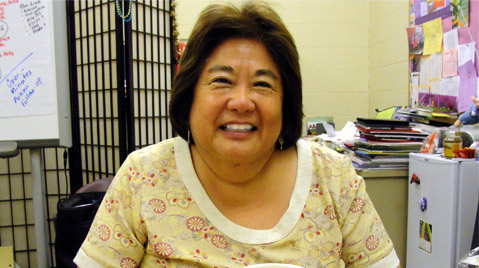 Carlyn Fujimoto is about to enter into her third year as Principal of Pearl City High School.

With the 2009 summer school session underway and the fall semester right around the corner, Fujimoto is preparing to navigate through the first round of looming budget cuts that will impact the Department of Education across the board.

Many budget issues are currently on the table as school administrators await the Board of Education’s decision. The reduction of teaching hours and school days per year as well as a big hit to the schools athletic programs has put the school on edge.

On the positive side, Pearl City High School has a reputation of being one of the top public high schools in the state with an enrollment of 1850 students for the 2009-2010 school years. School support groups such as the Student Community Council (SCC) and the Parent, Teacher, Student Association (PTSA) play a major role in the schools success.


As a Pearl City High School graduate (class of ’77), I thoroughly enjoyed the climb up the hill to sit down with Principal Fujimoto to conduct this interview and discuss the future of the school.

Q:  How are you preparing the school to operate with the projected budget deficit on the horizon and the possibility of reduced teaching hours and school days?

A:  “As much as possible, when students do return and more importantly when teachers do, we are probably going to have to do some upfront planning and through communication as much as possible inform parents on what’s been happening. We already have in place what we want to do of course, for the next school year but we don’t know how much of that is going to be affected by the cut in amount of instructional time and days.

What’s currently been talked about is that every school may have to face at least cutting 5% of their budget for the next school year. Right now we have a certain percentage of  monies that comes under the “Weighted Student  Formula”  that  may be affected by about $35 less per student. So, if you times that by 1850 kids, that’s a lot of money. What that means is as much as possible you don’t want to reduce the teaching staff.  It might mean a cut in the use of equipment and the purchasing of paper and supplies.”

Q:   The impact of proposed budget cuts to the school’s athletic programs?

A:   “Individual schools don’t know exactly how we are going to be affected. It was recently recommended by the superintendant to the Board of Education to cut roughly $700,000 in the athletic funding statewide. We don’t know what impact that will be other than the fact that it’s listed under casual hires, equipment and supplies. All of our coaches that we hire are considered casual hires.”

Q.   How did the schools football coaches recently pitch in to help out the program?

A:   “They volunteered to donate the salary that they would receive to hopefully cover the costs of equipment.”

Q: PCHS support groups that make a difference at the school?

The second group is the Parent, Teacher, and Student Association. Their primary role is to seek ways or find the means to somehow financially support the school in ways that we cannot. The PTSA is more involved, not only financially but also with school community service projects that need to be done. They serve as the liaison to get other entities to help out.”

Q: Are there any curriculum changes being implemented for the upcoming school year?

A. “All of the high schools in the State of Hawaii are currently under going what’s called “High School Redesign”. Research has shown that some of the things that are important for high school students is the personalization. Next year what we’re going to go back to is starting with teams of teachers who will be working with the kids.

Other things that we are working on is how can we make this more relevant for kids in terms of what they learn in the classroom? So the math may not necessarily be connected to science. If we try more interdisciplinary things, students will also find it more meaningful. So, what we’re interested in trying to explore is bringing back the rigor so that there is relevancy in the classroom and the personalization
through relationships.

So the three R’s are very different from before.  It’s no longer Reading, Writing, and Arithmetic. It’s Rigor, Relevance, Relationships.”


Q:   Any message that you would like to send to the incoming student body?

A: “First, we are going to try to do more personalization for the students. The second thing is next year we’re starting a program called “Advancement Via Individual Determination.” We’re trying to have students with the learning opportunities that have the potential to go to college, but maybe they were never afforded that opportunity to think within their family that they can.  Hopefully this will help all the students as well.”