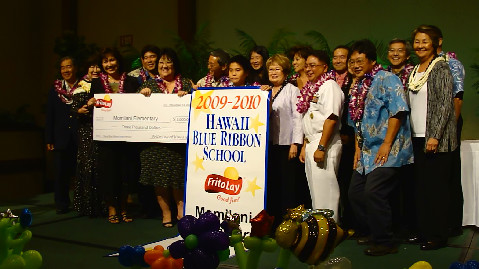 Momilani and Manana Elementary schools, both from Pearl City, were amongst 13 Hawaii schools eligible to be named one of three “Hawaii Blue Ribbon Schools.” Momilani, Royal and Ewa Beach Elementary are now eligible for the National No Child Left Behind – Blue Ribbon School recognition in 2010. 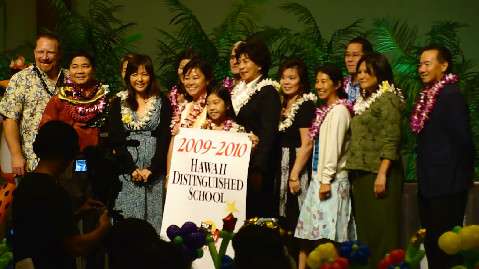 The Hawaii Distinquished School awards program recognizes schools at both the elementary and secondary levels. To be nominated, schools must show substantial improvements in test scores and that their students are achieving at the highest levels in both reading and math.

When asked about their continued success, year after year at Momilani Elementary School, Principal Doreen Higa commented: “This has been a very nice walk with our parents and our community and of course our teachers. We are very strategic in how we deliver instruction and how we run our programs. We’re very happy. We have an opportunity to go for our third National Recognition. The last time we won was in 1996-97 and 2004. I’m proud of the school, very proud to have been there and just really excited.”

The following 13 schools were named as Hawaii Distinquished Schools as well as being nominated for the Hawaii Blue Ribbon Award: