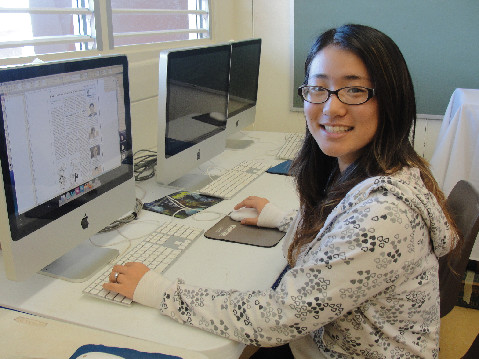 Grace Morita has many talents that include the ability to organize, lead and execute the daily duties of running Pearl City High School's (PCHS) Messenger Newspaper as the 2009-2010 Editor in Chief.

It’s a lot of responsibility for just a sophomore, but Grace feeds off the opportunity. She has a great staff of student journalists and photographers that deliver news worthy content that informs, educates and entertains the PCHS student body, teachers and administrative staff with each monthly issue. 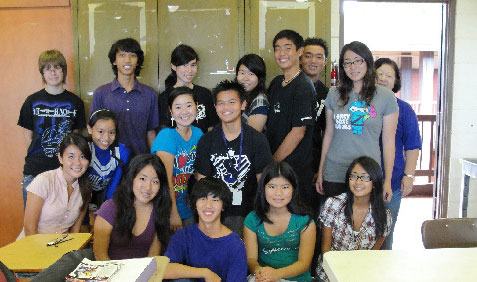 Under the guidance of Messenger Advisor, Mrs. Gay Ching, Grace has been given the freedom to explore topics that directly affect her peers as well as the Pearl City community. For an example, subject matters that have a direct influence on the PCHS student body as teenagers are brought up for discussion, assigned, researched and presented to deliver a positive resource for the Messenger student reader.

What’s most important in Grace Morita’s life is her strong Christian beliefs and commitment to her faith. She has expressed a desire to continue to serve her faith by attending a Christian College on the mainland upon graduation from PCHS and possibly, someday becoming a minister.

As a Christian, she understands the importance of helping others. She keeps herself grounded and focused on goals that will meet and help shape her future. It’s exciting to think of the journey that lay ahead for Grace. MyPearlCity.com will definitely work on keeping you updated along the way.

Q: How do you like being in charge of the PCHS Messenger Newspaper as Editor in Chief?

A: “I love it! It’s not so much being in charge but you know, I was on the staff last year as a reporter and would watch our editor. She was so dedicated to the paper and I remember I wanted to be like that. The best part is getting the paper out on time, meeting the deadline and seeing everybody’s reaction.”

Q: What process did you go through to become selected as the next Editor in Chief of the Messenger?

A: “I was appointed by my teacher Mrs. Ching.”

Q:  How has Mrs. Ching helped you make the transition from reporter to Editor in Chief?

A: “Mrs. Ching is so strict. She’s a good role model and she is very organized. She helps keep me organized.”

Q: Can you describe your first week on the job?

A: “I was intimidated at the beginning of the year. We had our first meeting where we introduced everybody and talked about all the issues and I wasn’t sure how I would direct the meeting. But we’re all friends. Everybody is so cooperative with each other.”

Q: How do you organize and assign responsibilities for each monthly issue?

A: “A couple of days after our last issue we usually have a meeting at lunch and basically before the meeting I have a list of all the articles that we’re going to have in the paper. At the meeting I distribute the articles.”

Q: What about stories that made a positive impact but were controversial?

A: “There was an article on pre-marital sex and how it’s a problem with teenagers and we were encouraging abstinence. We were encouraging girls to be more responsible, to resist the pressure from their friends and guys.”

Q: Besides being the Messenger’s Editor in Chief, what other areas of interest are you involved in at PCHS?

Q: Do you still have an interest in student council?

A: “I’m really interested in student council and legislative stuff and government and politics. I went to the student council conference last year. I wanted to go this year but there are a lot of responsibilities.”

Q: Your thoughts on the affect of the current Furlough Friday situation and the possibility of dipping into the State’s Hurricane Fund?

A: “I sense the feeling that people view public schooling as not important. They put it off to the side. It’s good that they’re focusing on the Hurricane Fund but you have to keep in mind that if you can’t educate the kids than what can you expect? With the furloughs, I can feel the impact. I feel the stress. The stress level definitely goes up and the grades are going down.”

Q: How about the amount of school work missed due to the loss of instructional days?

A: “There’s homework and there’s homework. The thing is the teachers don’t have enough time in class to teach the work. It’s all self directive, I’m not sure if we were spoiled all this time and maybe now’s the time that we need to step up and get more responsible for our learning or it’s just holding us back.”

Q: What are your future plans upon graduation from Pearl City High School?

A: “I think about the future a lot. I see myself, well not in Hawaii. I want to get out and see the world and meet new people. Get into a new environment, maybe California. I’ve always wanted to go to a prestigious college but since I grew in my faith, my views have sort of changed. I want to go to a Christian College and be in a Christian environment. I really want to be involved in the church. I even want to go on world missions.”

Q: You have expressed an interest in attending a mainland college after graduation from PCHS. Have you decided on a specific college and major?

A: “I want to go to Viola University in California. It’s a Christian College. As for my major, I’m more into communications, news writing and journalism, but as of right now,
I’m not quite sure. I’m really involved with church and ministry and I wanted to go into ministry and use my experience as being editor and managing and organizing to become a pastor or minister.”

Q: What church do you currently attend?

A: “Newtown Church of God.”

Q: Where do you get your inspiration? Mentor?

A: “My Dad. He’s very strict but he’s not so strict that he keeps me bounded in a box. He guides me and supports me in whatever decision I make. It’s always going to be inspiring. I’m a daddy’s girl.”