When current Pearl City Highlands Elementary School (PEACHES) Principal, Michael Nakasato was selected to succeed recently retired Principal, Mr. Leroy Ching, he realized right away, the big shoes he had to fill. Principal Nakasato inherited a well oiled and very successful administration from Principal Ching and has been on the job for little more than 5 weeks. 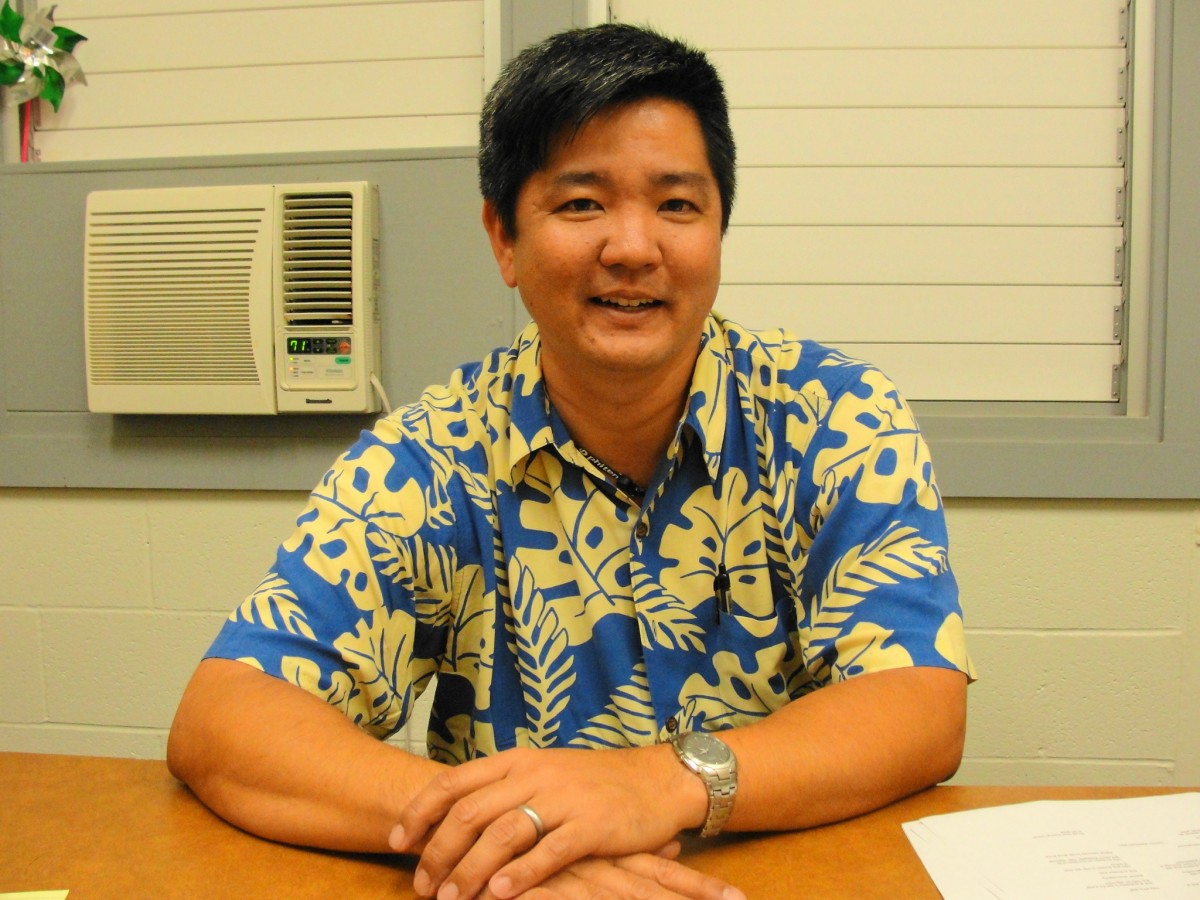 Principal Nakasato is Pearl City born and raised and proud of it (and a really good guy).  He attended Palisades Elementary, Highlands Intermediate and Pearl City High School where he graduated in 1985. Coming home to Pearl City with the opportunity to work in the very community he grew up in means a lot to him. He has spent the first 19 years of his career as a teacher and administrator on the Leeward coast in both the Waianae and Ewa Beach communities.

The Pearl City District Complex of schools has welcomed Principal Nakasato with open arms and he appreciates the gesture. As the largest DOE complex in the state, the school Principals and their Administrations have deep roots and connections in the Pearl City community. Principal Nakasato knows that he must make that connection and has a great start so far with the support of his staff, parents and community organizations who have stepped up to make the difference.

MyPearlCity.com is happy to welcome Principal Michael Nakasato home and wish him all the success as he moves Pearl City Highlands Elementary School into the future.

Q: How does it feel to come back to your hometown as Principal of Pearl City Highlands Intermediate School?

A: “It’s kind of rejuvenating coming back to Pearl City.  I’ve been in the DOE now for 19 years and away for the past 18 ½ years so it’s been nice coming back.”

Q: When did you start your career in the DOE?

A: “I started as a teacher in 1990 out at Leihoku Elementary on the Waianae Coast, spent 16 years there. I started as a 5th grade teacher and then I was moved on over to a 6th grade teacher. I taught 2nd grade and I was also the math and science curriculum coordinator and the technology coordinator and sooner or later my boss said, “hey Mike, its time for you to move on,” so I entered the Administration Program.

In 2006 I helped open up Ocean Point Elementary School which turned into Keone’ula. I spent 3 ½ years there and then this position opened up, and I knew Mr. Ching retired and I jumped at the chance to come back to Pearl City.”

Q: How smooth has the transition been from Principal Leroy Ching’s administration to yours?

A: “He hired a bunch of great people, and he had a system set up and running so it wasn’t a huge transition for me to come on in.”

Q: What type of selection process did you go through?

A: “The posting came out some time in November. What the DOE does is say hey, there’s an opening, there’s a Principal position opened up and everybody, any EO (Educational Officers) can apply.  The basic requirements are that you need a certificate of administration practice for the DOE and you have to be tenured.  Any Principal can apply. There were eleven of us that were finally interviewed and I was lucky enough to be picked out of the eleven.”

Q: How have the Pearl City District Complex schools been with regards to their support for you as the newest Principal on the block?

A: “I kind of knew who they were, I didn’t know a lot about them but the other Principals in the complex have been awesome about welcoming me in.”

Q: How about support from the Pearl City community?

A: “There are so many people in the community that help get this school running with fundraisers and that sort of thing. Mr. Ching set up a really safe environment where parents will call and say what’s going on and how can I help you?”

Q: Where there any familiar faces upon your arrival at your new school?

A: “There’s a huge changing of the guard. When I came back I kind of expected to see some of the teachers still here but they’ve all retired. Just talking to a lot of the parents, they’re my classmates. I actually have some of the students here that were children of some my students when I was doing summer fun up the street. So I have four or five students here that I had their mommies and daddies as kids.”

A: “The heart. The big thing about my school is everybody, from the school community, meaning from the children, all the way up to the grandparents to the neighboring families around here are all here for the kids. Anyway possible that they can come and help kids learn and succeed academically, they are there for us.

Parents that have called, that have typical complaints, I call them and tell them what’s going on and they want to jump on board and say how they can help. It’s really neat seeing that sense of community here and how they can help the school. That’s what makes this school special.”

Q: Do you have staff on board with Pearl City connections?

A: “A lot of my teachers are from Pearl City or the neighboring area and they’re not here just to earn a buck. They wanted to come back to Pearl City to help get our kids from elementary school all the way to Pearl City High School.” 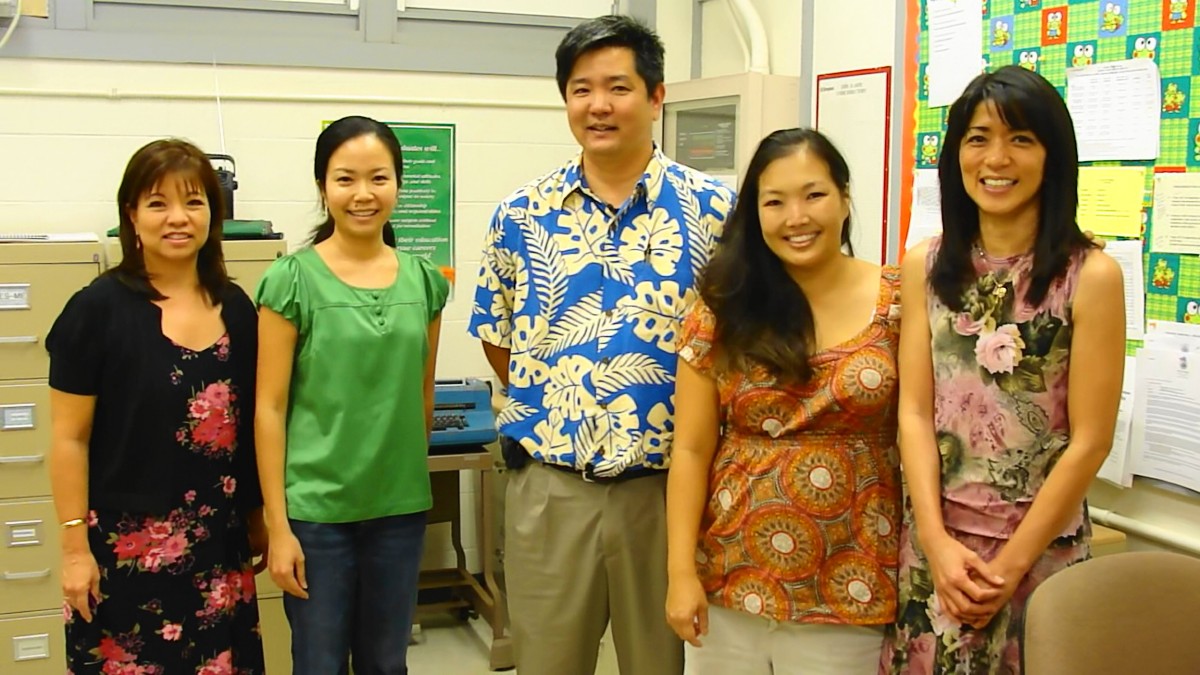 Prinicpal Nakasato with members of his faculty and staff (4 of 5 pictured are Pearl City H.S. Alumni). Photo By: Barry Villamil / barry@mypearlcity.com

Q: How do you see the school growing and improving during your tenure?

A: “I want to be a school of choice. I think a lot of the big communities like Mililani are coming up and my school is really dying in a sense that my parents still live in the same house they did and it’s kind of like that so we’re losing a lot of kids to geographic exceptions. I want the public to see all the great things that we have going on here that they need start coming here as the school of choice instead of looking at a geographic exception and moving on out.”

Q: What role will technology play in upgrading the learning process?

A: “My background is technology. I want to be able to get the technology and help get our kids in the 21st Century using the internet and the technology out there to kind of further the kids. Hopefully we can start getting I-Pads and those kinds of things to download books and to be able to have the kids have their own.

One of the things that all schools are slowly moving into is guided reading. Everybody in 1st grade shouldn’t be reading a 1stgrade book. If you’re reading at the 5th grade level you should be reading 5th grade. We don’t necessarily have the resources to buy all those books. The school that I just left, there was a library with a thousand books per class. It was a brand new school so they had the money for that. We don’t have that kind of funding. If we had some kind of platform where we can download those kinds of books, we wouldn’t have to replenish all that."

Q:  Are there any individuals that were influential in shaping your career?

A: “Randy Miura who is a Pearl City High School grad too. He was my mentor growing up and he kind of shaped the way I do things as an administrator. He’s a Principal out at Leihoku Elementary School in Waianae. Leihoku is the Punahou of Waianae and simply because of Randy. He’s put the heart in the school. When I left that school, I had 16 years of experience and I was probably 10 in longevity there. There are so many teachers that stay there because of his leadership and what he sees for the Waianae complex. Also, Eileen Hirota was very influential in my development as an administrator. Eileen's sister, Gracie Matsuo is a former Principal of Lehua Elementary School in Pearl City."

Q: Where do you see yourself 5-10 years down the road?

A: “I’m going to be here. I just started and I have big plans for the school as to continue to do all great things that we’re doing and maintain what’s going on. I have no plans on leaving. I want to just further the great things that Mr. Ching has done.” 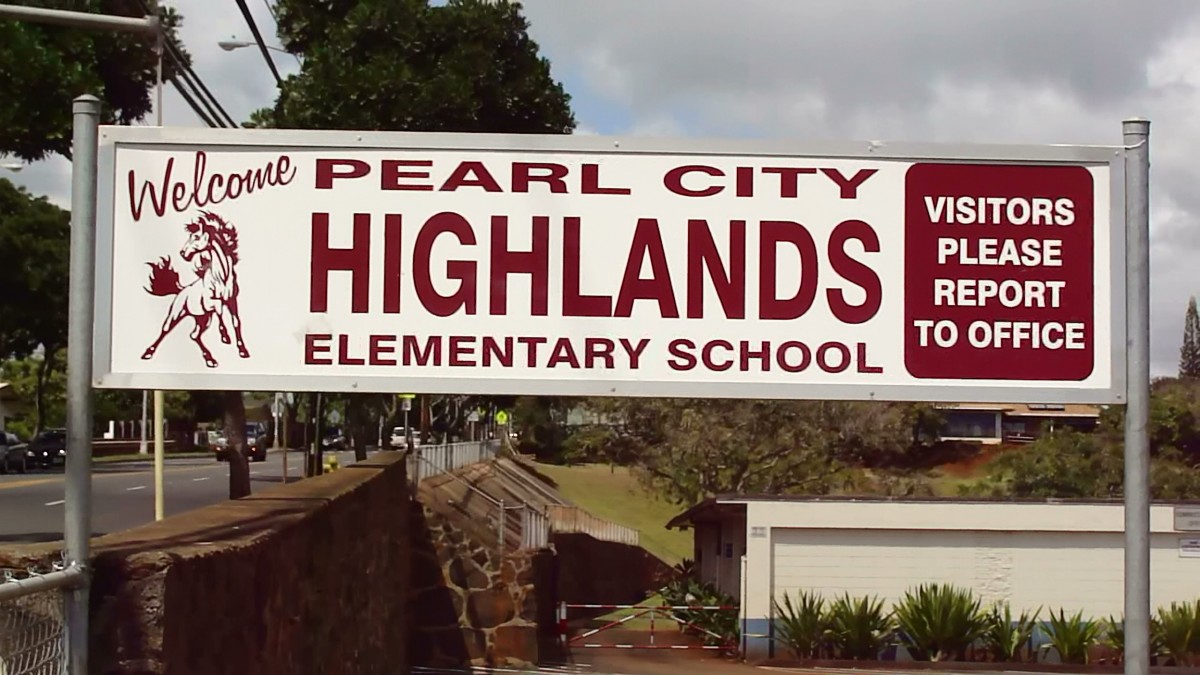