As athletic trainers at Pearl City High School (PCHS), Colin Lee and Kim Imamoto watch over 700 student athletes participating in 50 sports. They are trained to recognize, evaluate and treat injuries and rehab injuries through reconditioning. 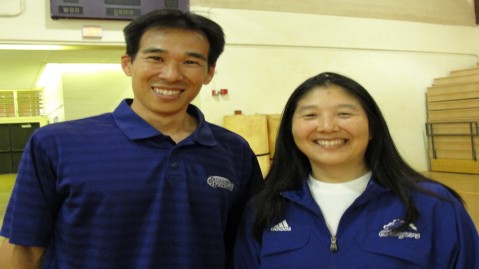 Lee started back in 1997 just when the field of athletic training was making its presence in Hawaii public high schools. “When I first started here, I didn’t even have a room. This school was built without an athletic trainer in mind,” said Lee.

I can personally attest to that comment having played sports at PCHS back in the middle 70’s. Our team manager wheeled around a cart filled with tape, ace bandages, Ben Gay and a huge container of salt tablets. Also, an extra football helmet to gather guava’s and lilikoi fruit from the bushes to grind during water breaks. We survived!

Well, times have changed and definitely for the better. Lee and Imamoto are certified athletic trainers and are on top of their game. Imamoto joined Lee at PCHS back in 2005. 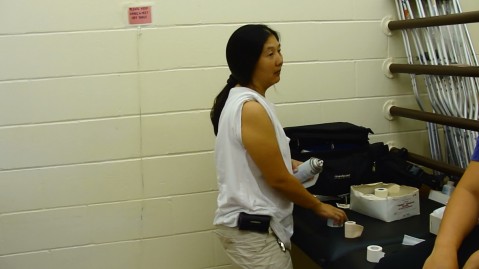 Kim Imamoto at work in her athletic training room at PCHS. Photo By: Barry Villamil / barry@mypearlcity.com

As far as athletic training goes, the duo has helped rank Pearl City High School as one of the top programs in Hawaii high school athletics. Budget cuts makes maintaining supplies a challenge but doesn’t deter from the level of care each student athlete receives while participating in sports at PCHS.

Recently, Lee was put on the other side of the business after undergoing surgery to repair a foot injury. Three days after surgery, he was back at work with a cast and on crutches assisting his partner, Imamoto with their daily duties, caring for PCHS athletes in need. 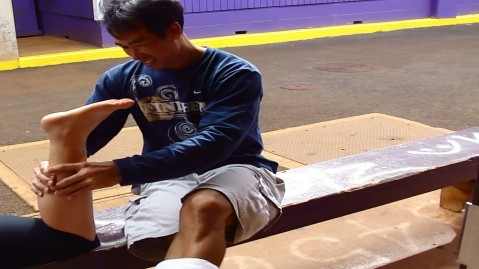 Colin Lee back at work after foot surgery. Photo By: Barry Villamil / barry@mypearlcity.com

Colin Lee and Kim Imamoto work as a team. Together, the highly skilled athletic trainers play an integral role in the success of Pearl City High School Athletics.

What made you decide to choose a career as an Athletic Trainer?

Lee: “I always wanted to get into the medical field but I also had a love of sports. The athletic training fit the bill. It serves the best of both worlds, doing the medical part, the sport medicine side, and also seeing sports everyday.”

Imamoto: “I got into athletic training because I got hurt in high school and we didn’t have an athletic trainer. It kind of made me more motivated to do something like that and go back to the high school level.”

Where did you attend college?

Imamoto: “Under grad I went to University of New Mexico and my graduate school I went to Fresno State.”

How has it been working at Pearl City High School as an Athletic Trainer?

Lee: “We have a huge student population as well as athletic population with about 700 athletes here in about 50 sports. It’s a challenge. I used to do it all by myself since I started back in 1997 until Kim came along in 2005. I’m not sure how I did it but with her help it’s been great.”

Imamoto: “It’s great. I don’t think I could ask for a better place. I’ve been on the mainland working and at Chaminade. It’s awesome here.”

Lee: “With Reid and his support and Principal Fujimoto, they make it easy for us. The coaches, kids and the parents are all good. All those things just make it easy.”

Imamoto: “He’s been awesome. He supports us with everything that goes on here. There are certain situations that come up and he definitely supports us all the time.  We get a lot of support from our AD, Principal and all the staff here.”

Would you say you prefer working at the high school level?

Lee: “Well, of course you have the glamour or prestige of working on the professional level or even the college level but I’m pretty comfortable and the sports that we have here at Pearl City is great. I like the challenges that high school athletic training brings.”

Imamoto: “Yes. I worked at Chaminade prior to this and the hours were just crazy. Right now with Colin and I, it kind of eases the load. It’s still pretty hectic because we do have a lot of kids out here, but it eases the load with two of us.”

How do you split up your responsibilities with regard to covering games?

Imamoto: “We just look at the schedule and kind of equally split the sports on what games we cover. We don’t want to just be covering the same sport every time. We want to be more available to all the kids. Just so that they know we’re out here and it’s not only one person covering.” 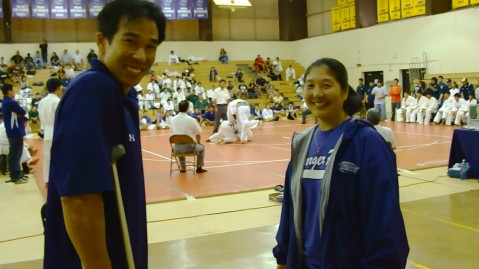 Lee (on crutches) and Imamoto at a recent OIA Judo match held at PCHS. Photo By: Barry Villamil / barry@mypearlcity.com

How has the recent DOE budget cuts to high school athletics affected your department?

Lee: “Our budget was only so big and it is probably going to be cut significantly for next year. We just have to be more creative and budget. Hopefully the athletic department can help out as a whole. It’s more important than ever to preach prevention to reduce injuries.That would then, subsequently reduce the use of supplies."

Is there anyone that you would like to recognize that made a difference in your career?

Lee: “Certainly. Our former AD, Roy Ichinose and our former Principal, Gerald Suyama. They hired me back in ’97. Mr. Ichinose let me grow as an athletic trainer. I also want to thank all the athletic trainers at UH that helped guide me along the way. My parents, they allowed me to find my niche and with their support, I’m where I am today.”

Imamoto: “Mr. Suyama and Mr. Ichinose that both retired a few years back. If it wasn’t for them I would not be here.”