Message from the Editor: Memorial Day 2010

On Memorial Day, Monday, May 31, 2010 we honor the men and women of the United States Armed Forces who are laid to rest at the National Memorial Cemetery of the Pacific in Honolulu.

Hawaii Boy Scout Troops spent most of Sunday placing leis on graves at the National Memorial Cemetery. Their hard work enhanced the honor and sense of appreciation for the thousands of souls who have made the sacrifice to protect American lives. 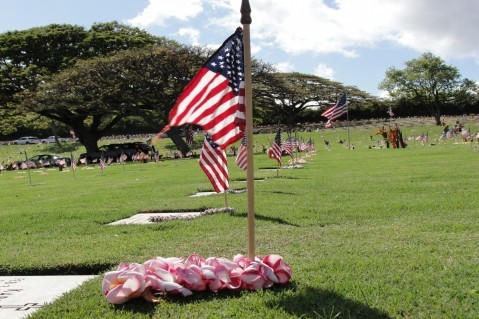 American flags could be seen, row after row, on each grave throughout the National Memorial Cemetery. The beautiful leis seemed to embrace their spirits with the spirit of Aloha. 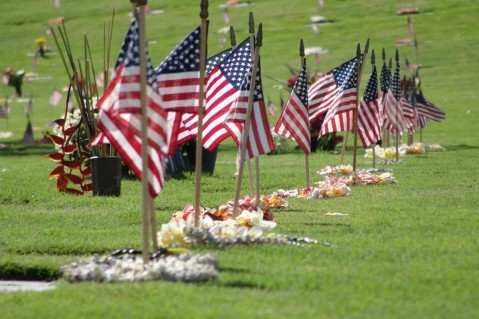 American flags and fresh leis grace each grave at the National Memorial Cemetery of the Pacific.

Seniors from District 3 along with volunteers from the Mana Loa-Nimitz Lions Club strung and packed over 2000 leis on Friday to be delivered to the Boys Scouts on Sunday at the National Memorial Cemetery of the Pacific. 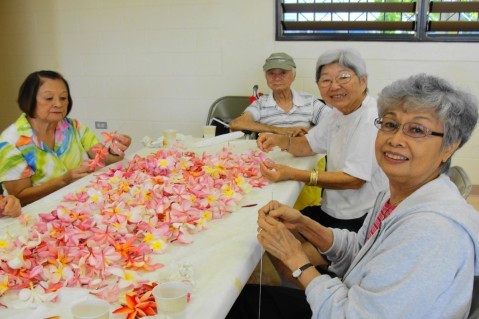 Waiau Senior Club members from Pearl City pictured here as they work on a fresh bunch of plumeria flowers.

On  Sunday, I drove from Pearl City to pay my respects to my father-in-law who is buried at the National Memorial Cemetery. He was a long time resident of Pearl City, an Army Veteran and retired from the Pearl Harbor Naval Shipyard after 35 years of service in 1982.

I made the walk from the curb to his grave (92 steps) reading the grave head stones along the way as I always do. Each head stone tells a story, a bit of history. Name, rank, branch of service, wars fought in. Did they have a long life span or was it cut short as a result of being a casualty of war?

Every visit to his grave brings out the emotion of the dedication and sacrifice that  members of our United States Armed Forces gave in the past to protect our country.

The bravery continues today as our troops engage in wars in both Iraq and Afghanistan. Let us all spend a moment today, Memorial Day 2010, remembering those that have passed and pray for the safe return of our fighting men and women abroad to their families.

Thank you very much for logging on and being a part of our MyPearlCity.com Ohana.

Have a safe Memorial Day Weekend!