Waipio won the 2010 Little League Hawaii Majors District 7 Championship in the bottom of the seventh inning on Sunday breaking a 3-3 tie to defeat Pearl City 4-3  at Pride Field in Barbers Point. 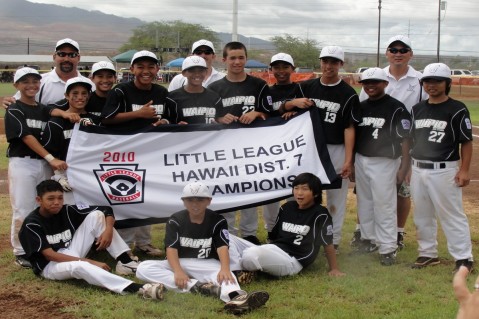 After holding Pearl City scoreless in the top of the first inning, Waipio went right to work at the plate. Kaho’ea Akau led off the inning with a single to center field. Akau reached second base on a pass ball at home plate. Next batter Ty Desa walked. Waipio had runners on first and second. Noah Shackles strikes out for out number one. Yokota walks Shiloh Baniaga to load the bases. Yokota strikes out Tyler Kushima for out number two. Akau scores on a pass ball at the plate. On the play, Ty Desa was tagged out attempting to score from third base. Waipio took a 1-0 lead after one complete inning. 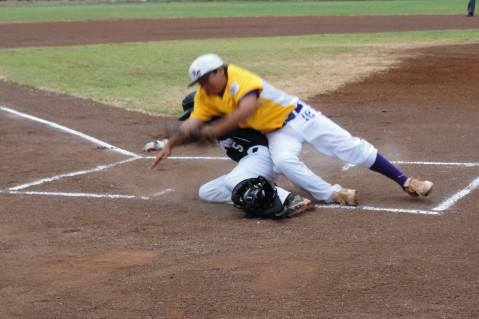 Waipio's Kaho'ea Akau slides under the tag of Pearl City's Matt Yokota to score the first run of the ball game.

Pearl City got on the scoreboard in the top of the fourth inning on Codie Paiva's solo homerun to left field off of Dane Kaneshiro. Paiva's homerun tied the ball game at 1-1. 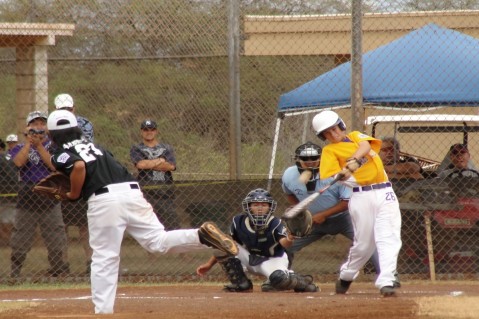 Pearl City's Codie Paiva drills a solo homerun in the top of the fourth inning off of Waipio's Dane Kaneshiro to tie the ball game at 1-1.

In bottom of the fifth inning, Pearl City brought in Codie Paiva in relief of starting pitcher Matt Yokota. In the inning, Waipio's Ty Desa jumped on a Paiva pitch for a two run homerun over the center field fence driving in Cody Maltezo from second base. Waipo opened up a 3-1 lead on Pearl City after five complete innings. 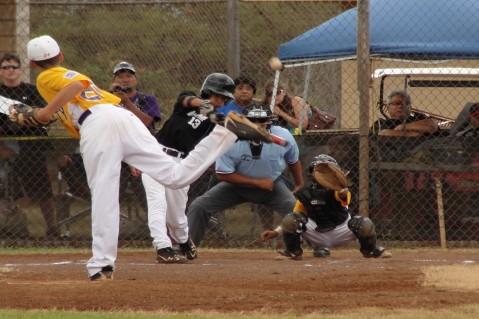 Ty Desa powers a homerun to center field off of Pearl City's Codie Paiva scoring Cody Maltezo from second base. Waipio took a 3-1 lead in the bottom of the fifth inning.

Pearl City came back in the top of the sixth inning to tie the score at 3-3. Pearl City's Matt Yokota came to bat with one out and two runners on base, Noah Abreu on first and Codie Paiva in scoring position on second. Yokota stroked an RBI double to center field scoring Paiva from second. Abreu moved up to third base. Keanu Nicholson came to the plate. Abreu scores on a pass ball that gets by the catcher and ties the game at 3-3. Nicholson goes down on strikes for out number two. Taylyn Kimura lays down a bunt and is thrown out at first base to end the top of the sixth. 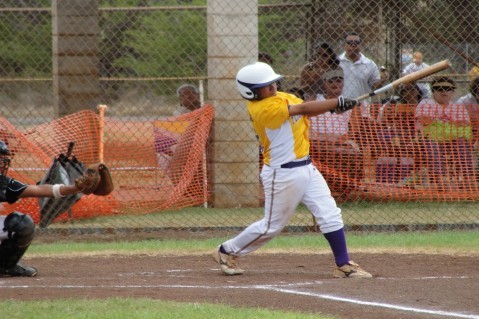 Pearl City's Matt Yokota hitting an RBI double scoring Codie Paiva from second base in the top of the sixth inning against Waipio on Sunday. 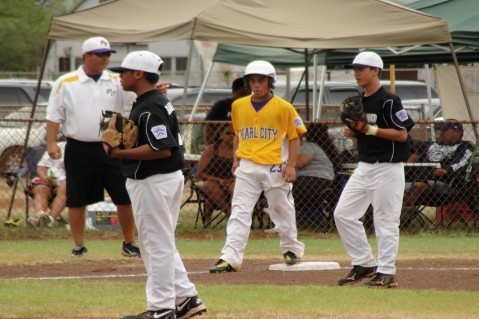 Noah Abreu will score from third base on a pass ball at the plate to tie the ball game at 3-3 in the top of the 6th inning.

Waipio opened the bottom of the sixth inning with Shiloh Baniaga grounding out for out number one. Tyler Kushima reached first base with an infield single. Ezra Heleski came in as a pinch runner for Kushima at first base. Heleski reached second base on bobbled ball between the pitcher and catcher. Dane Kaneshiro hits a double. Heleski holds up at third base. Paiva walks Justice Nakagawa to load the bases. Interference is called on Waipio's third base coach Kiha Akau. Heleski on third base is called out for out number two. Paiva strikes out Ke'olu Ramos to end the scoring threat and inning. The ball game goes into extra inning. 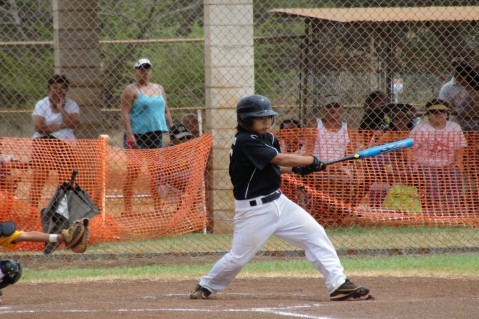 Dane Kaneshiro hitting a double in the bottom of the 6th inning against Pearl City.

In the bottom of the seventh inning, Waipio's Matt Campos lines out to Codie Paiva on the mound for out number one. Kaho'ea Akau reaches first base on an infield single. Paiva walks Ty Desa. Waipio has runners on first and second with one out. Akau steals third base. Paiva strikes out Noah Shackles for out number two. Desa moves up to second base. Shiloh Baniaga lines a single to center field scoring Akau from third base with the winning run and District 7 Championship. 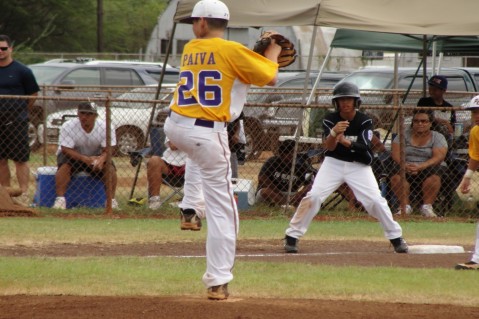 Kaho'ea Akau on third base in the bottom of the 7th inning. Akau will score on an RBI game winning single by teammate Shiloh Baniaga. 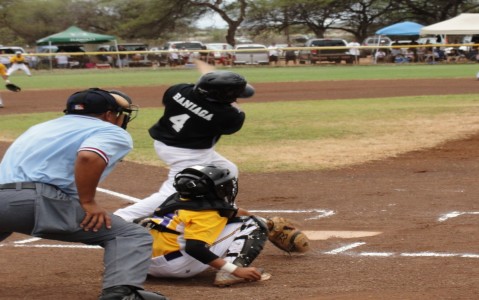 Shiloh Baniaga game up big from the plate in Waipio's District 7 Championship win over Pearl City on Sunday at Pride Field in Barbers Point.

It was a hard fought championship for both teams. Waipio and Pearl City gave it a 100% effort to the last out. The match up will definitely go down as a classic District 7 Championship game.

"We played a very good team, a very well coached Pearl City team. We had to be on our game," said Waipio third base coach Kiha Akau. "When you play in a District like this that has a lot of good teams, it makes you stronger. I like our chances in the state tournament."

Waipio pulled it together as a team and had some outstanding performances from players like  #5 Kaho'ea Akau who scored the first run and the winning run in today's championship.

"Kaho'ea is always our spark plug. He gets on base and causes havoc and he scored the winning run, said Waipio Manager, Brian Yoshii. "Defense is good for us. Our pitching, we have a lot of confidence in Dane and Shiloh. They did a job, of course Pearl City can hit. It was a great team effort. Everybody contributed." 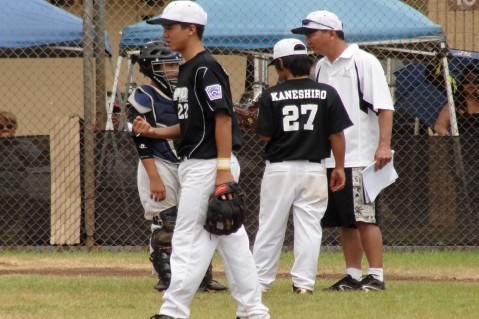 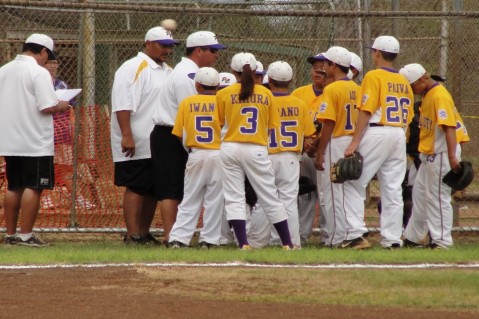 Pearl City was well coached and came close to forcing a winner take all championship game in the double elimination District 7 tournament on Monday. 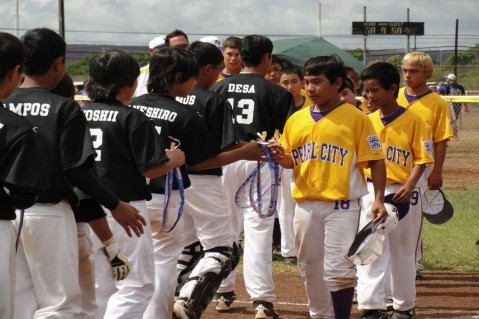 The 2010 District 7 Championships showed great sportsmanship between all teams participating in the tournament.

Waipio moves on to next week's State Tournament at Pride Field in Barbers Point.