The Pearl City Lady Chargers improved their record to 2-0 on Saturday with a sweep of the visiting Aiea Na'Alii  25-20, 25-20 in OIA Red Western Division Varsity Girls Volleyball. 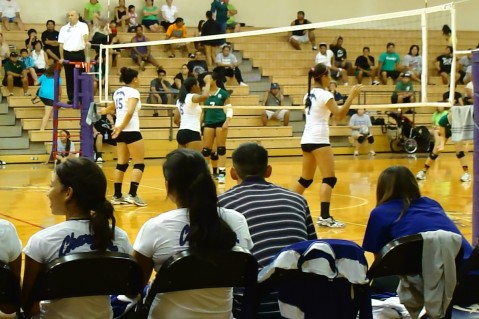 The Lady Chargers stood tall at the net during their two set sweep of the visiting Aiea Na'Alii on Saturday, August 28, 2010.

The Lady Chargers opened the match against Aiea taking the first set 25-20. In the second set, the Chargers jumped out to a quick 12-6 lead. Aiea fired back with a 6-0 run to tie the score at 12-12. Aiea went  up 20-17 before the Lady Chargers tied the score at 20-20 behind the steady serve of Brandee Chun and the outstanding upfront play at the net by teammate Tonisha Buford. Chun and Buford combined for the last 6 points to take set two and the match.

"It was a little shaky in the second set but we knew that Aiea was going to come back after that first set so we were ready for them in the second set," said Lady Chargers Head Coach, Stephanie Shigemasa. 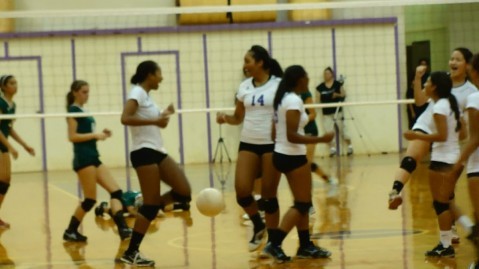 Pearl City's, Tonisha Buford (left) is congratulated by teammate #14 Sina Mauga after nailing a kill to put the Lady Chargers up 24-20 in the second set. 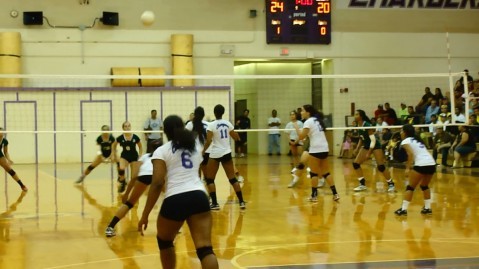 Pearl City's, #6 Brandee Chun serves in Aloha Ball off a Na'Alii defender for the game and match point.

Pearl City is playing well two games into their 2010 OIA Red Western Division schedule. As a team, they have shown what it takes to "play as one"  to earn each victory. On Saturday,  it was a combined team effort that led  the Lady Chargers over Aiea.

"It has to be a team effort. We were down in the second set so everybody had to pull together so I think it was just a whole team effort today," said Shigemasa. 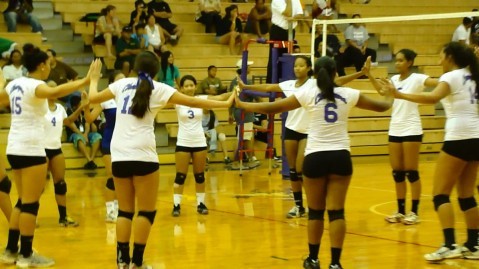 Next up for the Lady Chargers is a road trip to Campbell High School to take on the Lady Sabers on Tuesday, August 31. The Junior Varsity plays at 5:00pm with the Varsity to follow.