Teammates Shiloh Baniaga, Tyler Kushima and Dane Kaneshiro were honored as the Highlands Intermediate School administration, staff and student body lined the school hallways as the three champions rode bye in golf carts that were decorated by the students. 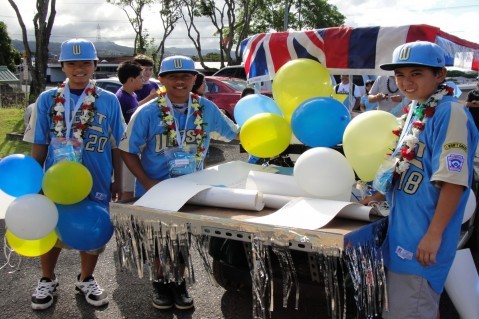 Dane Kaneshiro, Shiloh Baniaga and Tyler Kushima had a great time cruising the Highlands Intermediate School Campus on Wednesday during their Homecoming Parade.

Vice Principal, Mr. Pat Anbe and Students Activities Director, Mr. Eric White served as both chauffeur and cheer team as they drove the Champions around campus. 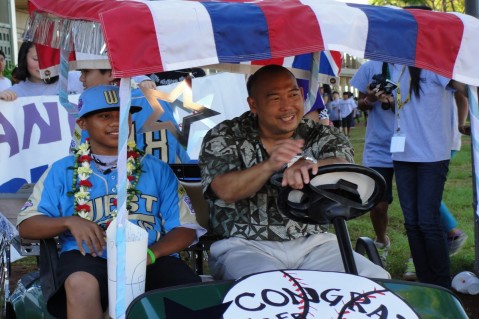 The Waipio Little League team captured the attention of a world wide audience with their never give up attitude and excellent baseball skills. After capturing the West Regionals in San Bernadino, California, the team made their way to Williamsport, Pennsylvania and a spot in the 2010 Little League World Series.

After dropping their first game to Georgia, the team had to fight their way through the losers bracket to advance. They would actually have to face Georgia two more times, beating them 7-4 and 12-5 to make it into the US Championship game against Texas, a tournament favorite. Waipio beat Texas 10-0 due to the 10 run mercy rule to capture the Title. Next up for the newly crowned US Champions would be a match up against Japan for the Little League World Series Championship. Waipio fell to Japan 4-1 to finish as runner up.

The United States Little League Champions from Waipio, represented the State of Hawaii and the United States with pride. They are a terrific example of good sportsmanship and humbleness on and off the field. Congratulations to Manager Brian Yoshii and his coaching staff for instilling those principals in each player. Also, congratulations to the parents, family and friends who supported their team all along the way. 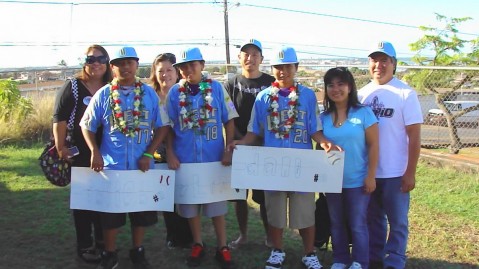 Shiloh, Tyler and Dane pictured with their parents at the beginning of the Homecoming Parade. 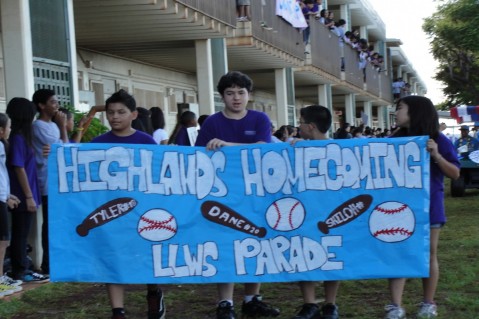 The Highlands Intermediate School students did an awesome job creating signs and banners for the Homecoming Parade.