The Pearl City Lady Chargers traveled  to Aiea on Tuesday and came away with a sweep of the Lady Na Alii, 25-10, 25-17 to improve to 7-1 in the OIA Girls Varsity Volleyball Red Western Division. Aiea fell to 3-6 on the season.

The Lady Chargers actually reversed their 2009 record against Aiea by defeating the Lady Na Alii in both contests this season without losing a set. On August 28th, Pearl City swept Aiea 25-20, 25-20.

"For us, Aiea was our nemesis, year after year, so for us to come away with two wins against a good team is a positive for us going into a big game, again, against Campbell," said Lady Chargers Head Coach, Stephanie Shigemasa. 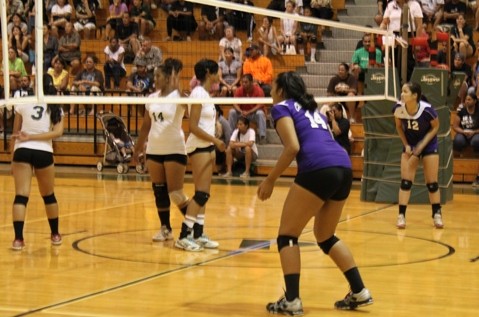 
Pearl City put it all together Tuesday night  taking the first game in a quick pace, 20-10.  In the second game Aiea kept it close early moving ahead 6-5. Pearl City would tie the game on the next point and maintained a 3 to 4 point lead before pulling away at 21-17. Pearl City won the next 3 points and took a 24-17 lead. #6 Brandee Chun served up Aloha Ball for the game and match. Second game goes to Pearl City,  25-17.

The Lady Chargers got excellent play once again from their outside hitters, Kaya Chong, Tonisha Buford, Marie Fujii. Pearl City has exhibited a strong passing and hitting game so far this season.

"Our passing has been a strength so far," said Shigemasa. "We have big hitters and we're just trying to work on our defense and our serving which a lot of times has been killing us, especially our serving. That's something that we're going to have to go back and work on again." 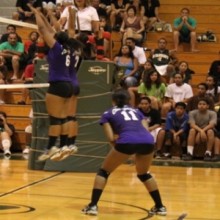 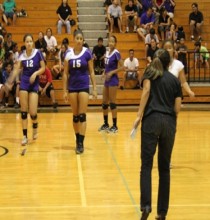 The Lady Chargers looked really relaxed and had their game under control Tuesday night against Aiea.

" I think our girls came out expecting to have a lot of fun," said Shigemasa. "We knew Aiea was going to be a big game for us so I think our girls going out and enjoying themselves was exciting for me to see." 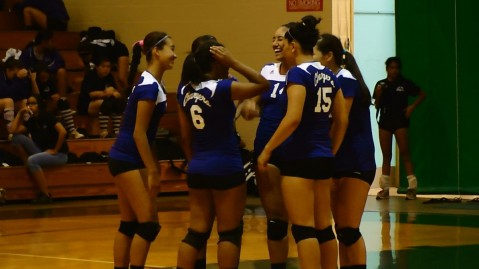 Lady Chargers huddle during a timeout on Tuesday against Aiea.

Next match up for the Pearl City Lady Chargers is a home game against Campbell on Thursday, September 23. Pearl City defeated the Lady Sabers earlier in the season, 25-21, 25-17.

Junior Varsity plays at 5:00pm with Varsity to follow.