The Chargers (6-2) staged a late comeback in the final minutes but came up short against the Kalaheo Mustangs (6-2) on the Kailua High School field.

Pearl City trailed by just a point with 3:19 to play after a tackle on Kalaheo quarterback Justin Pagan gave them an opportunity to score from their 20-yard line. But the Mustangs’ defense proved overwhelming, and Kalaheo scored the game-clinching touchdown on their next possession. 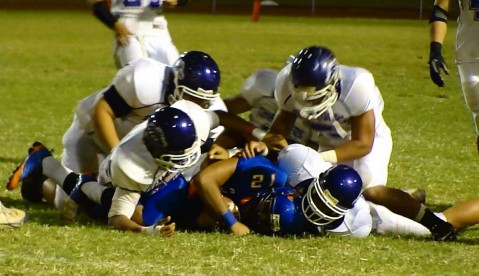 “We had a lot of dropped passes, missed coverage, they controlled the ball for nine minutes in the last drive,” said Pearl City’s head coach Kai Kamaka. “We just gotta play better defense, wrap up and make some tackles.” 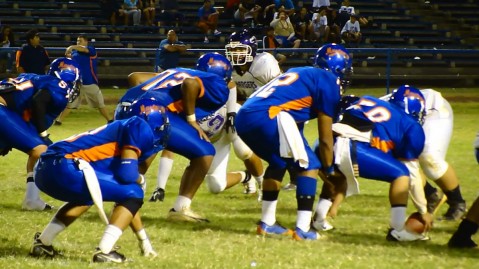 Kalaheo QB #12 Justin Pagan leading the Mustangs towards a score against Pearl City.

Defense was the dominant factor of the first half. It was two steps forward, three steps back for either team when they had the ball, as they combined for eight incomplete passes, two interceptions and 30 offensive yards lost to penalties.

“We got a lot of calls that didn’t go our way,” said Kamaka. “But what can you do? You can only get out there and try to make the best of what the kids give.”

Adding to Pearl City’s disadvantages was the loss of Cyrus Coen, who left the game in the third quarter with an apparent foot injury.  “I think somebody stepped on his foot and he twisted it,” said the coach. “We’ll see where he’s at, go back and assess the injury.”

Both teams were scoreless until 2:44 remained in the third quarter, when Pagan rushed into the end zone for Kalaheo’s first points. Pearl City running back Ray Cooper responded by returning Kalaheo’s kickoff all the way down the field, before finally being tackled by Royce Baginski five yards from the goal. After a series of incremental gains, Charger quarterback Dustin Bataya scored a touchdown to close the lead to 7-6.

It looked like Pearl City was lined up for another quick score after defensive back Justin Dela Cruz fumbled their kickoff and the Chargers recovered the ball with 43 seconds to go in the third. But their field goal attempt missed and Kalaheo retained possession of the ball from the beginning of the final period until Justin Pagan was tackled just short of a fourth-down conversion. By that time, Pagan and running back Jesse Carney had put together a nine-minute drive to the tune of 47 yards. 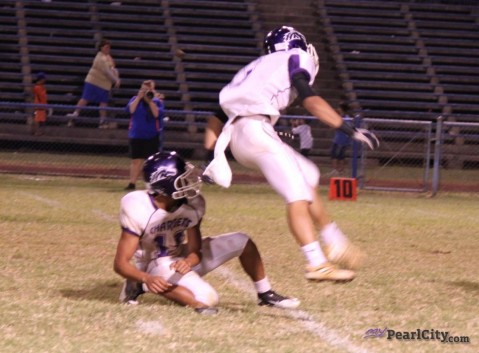 Pearl City Kicker #9 David Laronal missed a  field goal attempt out of the hold of #11 Dustin Bataya that would have given the Chargers the lead late in the 3rd Quarter.

Following Carney’s touchdown with 1:25 left to play, the Chargers were able to block Danielle Ferguson’s kick, giving them an opportunity to tie or win the game on their next possession. But Kalaheo’s defense denied Pearl City their storybook finish.

The Junior Varsity team, however, also took their game down to the wire and escaped with a 19-19 tie on a spectacular last-minute touchdown. “Tristin caught the ball, he was stuffed at probably the one-yard line, he had the game sense to see his teammate coming toward him and he made the lateral,” according to Kamaka, who doubled as JV coach tonight. “That wasn’t designed, that was just a player making a play,” he said. JV remains undefeated as both teams face Kaimuki next Saturday at Roosevelt. 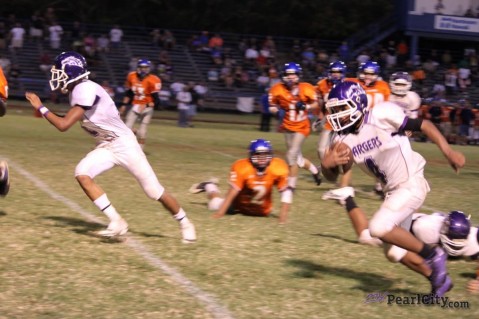 The Junior Varsity Chargers are on their way to the end zone to pull within one of Kalaheo at 19-18. The ensuing extra point kick would  tie the score at 19-19 to end the ball game. 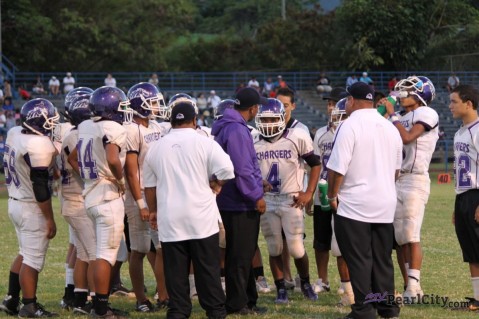 Chargers Varsity Football Head Coach, Kai Kamaka worked with the Junior Varsity coaching staff to guide the team to the tie and maintain an undefeated record in the OIA White Division.