Representative Takai along with Newtown residents and volunteers joined Officer's Kathleen Capellas and Anthony Bonilla from the Honolulu Police Department's CTAP (Community Traffic Awareness Program) on Kaahele Street near the entrance to the Newtown Recreation Center.

"There continues to be a problem with people speeding up and down Kaahele Street at all times of the day and this often results in pedestrian accidents and fatalities," Takai said. "We need drivers to obey the speed limit along this street and be aware of pedestrians in the crosswalk."

Tuesday marked the one year anniversary of a woman who died after being  struck by a vehicle in a crosswalk on Kaahele Street. Relatives and neighbors of the woman participated on Tuesday to honor her and help bring awareness for the need to slowdown and yield to pedestrians in crosswalks.

"Today is just an awareness for everybody. This is Kaahele Street, it's a very busy street. It's a long street and speeding is really a big problem here," said Nancy, a Newtown resident. "This crosswalk right here is the only crosswalk to get in and out of the Newtown Rec Center. People just need to be aware that people are using the crosswalk and they need to slow down," added Nancy.

Aiea residents have voiced there concerns for years about the increasing problem of speeding on Kaahele Street with the hope that their concerns would become top priority in securing a safe neighborhood. Pearl City has also has become a popular speedway for drivers as they make the transition from Kaahele Street onto Komo Mai Drive and through Pearl City neighborhoods.

"I think all safety issues are a top priority. We get a lot of complaints from people about speeding, so I think that this is a high priority," commented Pearl City Foundation Executive Director and Honolulu City Council Member elect, Breene Harimoto on addressing the concerns from residents regarding speeding. 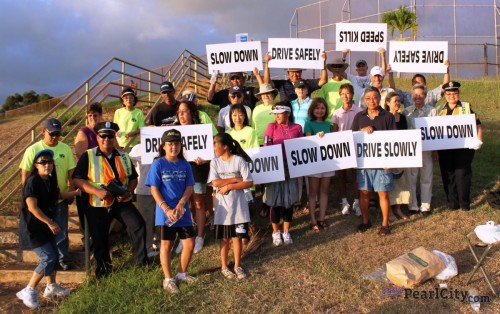