The Kaimuki Bulldogs came into Saturday's contest against the Pearl City Chargers expecting a win that would cap a perfect regular season (8-0) and the #1 seed in next week's Oahu Interscholastic Association White play-offs.

The Bulldogs accomplished both goals with a convincing 34-12 win over the Chargers(5-3) at Ticky Vasconcellos Stadium on the campus of Roosevelt High School.

The Kaimuki win over Pearl City sets up a rematch in next Friday's OIA White Division play-offs. The Bulldogs as the #1 seed will face the Chargers who are seeded at #4. Waipahu the #3 seed will take on #2 seed Kalaheo. Pearl City lost to both Waipahu and Kalaheo in the regular season.

Saturday's loss to the Bulldogs was the third in a row for the Chargers who have fallen upon hard times since winning their first five games of the regular season.

What made matters worse for the Chargers and will have a definite affect on the complexion of next week's match up, is the style of play by the Bulldogs in the loss to Kaimuki.

"There were so many late hits and personal fouls away from the ball that had no justice and bearing on the play and alot of taunting over the tackles," said Kamaka. "It almost got to a the point where one of my kids got injured. The safety issue for the kids has to come first."

Motivation will play a key role in getting the Chargers ready for next week's rematch with the Bulldogs.

"I think we're motivated now after the dirty plays that happened," commented Kamaka on getting his players ready for next week. "We're more than motivated to come back this week. We're missing four or five key guys that will be back next week."

Kaimuki went up on Pearl City on a 25 yard TD pass from QB Dallas Reis to Mason Kuali'i- Moe at 2:54 of the second Quarter. Kaimuki went into halftime with a 14-6 lead.

Kaimuki increased their lead in the third Quarter as Brandon Kekoa ran 58 yards for the score after receiving a pitch from teammate Wiseman Demei who returned the ball 22 yards.

Kaimuki scored again in the fourth Quarter on an eight yard run by Bulldog running back Tre Paderes. The extra point attempt was blocked.

The final score of the ball game came at 2:40 remaining in the fourth Quarter as Bulldog DB Mason Kuali'i-Moe picked off a Bataya pass at the 15 yard line and returned it 45 yards before pitching the ball to Lio Kelekolio who rambled another 45 yards for the touchdown. The extra point attempt made the final score 34-12.

Through the air, Kaimuki QB Dallas Reis threw for 101 yards, completing  8 of 14  and 2 touchdowns. Pearl City's Dustin Bataya went 8 for 13 for 79 yards with 1 touchdown and 2 interceptions.

On the receiving end, Mason Kuali'i-Moe hauled in 5 catches for 92 yards for Kaimuki and Ray Cooper caught 3 passes for 48 yards. 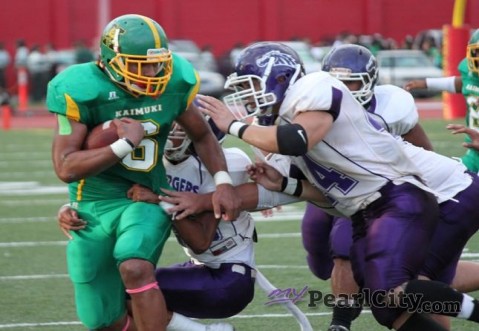 Congratulations to the Pearl City Chargers Junior Varsity Football team as they prepare for next week's OIA Junior Varsity play-offs after defeating Kaimuki 27-12 on Saturday at Roosevelt High School. 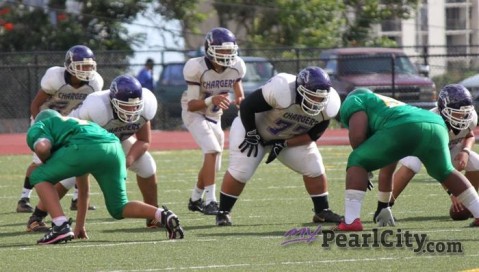