Every morning, Mr. Poyo, affectionately called “Jimbo” by staff, teachers, students, parents and volunteers at Momilani Elementary School, can be found directing traffic in the school parking lot.  He also has other duties that he volunteers for around campus each day that keeps him pretty busy.

On the day that I traveled to Momilani  Elementary School to interview Mr. Poyo, he was in the middle of transitioning from his parking lot traffic control duties, to making sure the sixth grade class was safely aboard  their bus that would soon transport them to a well deserved, day long field trip.

Mr. Poyo helped each student on the bus and wished them a good day. In return, the students wished him a good day as well. There was a definite connection between the students and Mr. Poyo as demonstrated upon the buses departure. As the bus pulled away from the curb, the windows were filled with hands waving goodbye. They all new that “Jimbo” would be there upon their return and would be looking forward to welcoming them home.

That’s Jimbo; he wears his heart and soul on his sleeve as he passionately goes along with his work, day after day.

“James "Jimbo" Poyo is such a treasure. Out of concern for the children's safety, he stepped forward to help with our traffic. Today, to slow down vehicles, he cones our driveway in skiing patters (like a slalom run) to make morning drop offs safe. He also is an all round volunteer, helping in the classrooms, on field trips, watching the children during recess, being a safety committee member’s year around and helps in planning for special events. Momilani is so fortunate to have him as part of our family.” 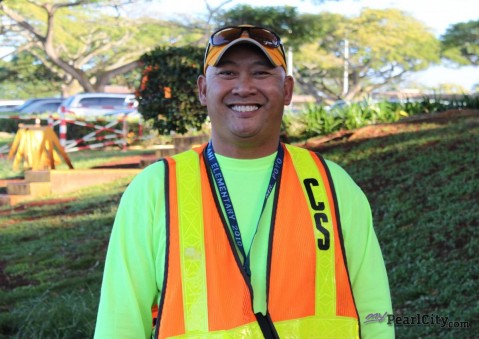 Q: When did you begin as a volunteer with the school’s parking lot traffic safety?

A: It all started a couple years ago with this dad, Carl Shigemura. He was sitting and waiting with his daughter and noticed that one of the dad’s almost ran over his own daughter so he asked Principal Higa if he could put up some cones to manage the parking lot.

It started from there. He asked me to come. That year, about two years ago, there were four of us. The kids from the other three are gone already so I’m the Lone Ranger now. Unfortunately, Carl Shigemura passed away last year, last September.

Q:  So the parking lot traffic control and safety program falls on your shoulders?

A: The last couple of years I’ve been managing the parking lot as a volunteer in the morning, just making sure everyone’s safe. You know parents are in a rush every morning so I just make sure that when they park in the parking lot that they cross the parking lot safely. After my parking lot duties I do my chores.

Q:  Those chores include more volunteer duties at school as well as responsibilities at home. I understand that you have an agreement with Mrs. Poyo that allows you to concentrate on your volunteer work at school and also help with caring for your children at home?

A: We’re the guardians of two kids and because there are two extra kids including my daughter, she asked me to quit working. So I quit work and I just take care of the kids pretty much full time now. I manage the house and come here and volunteer and come out for lunch supervisor duty. Whatever the school needs me for I come out and help.

Q: Does your daily work schedule at school  and at home afford you more time to spend together as a family?

A: By my wife asking me to leave work, it helps us spend more time with our daughter on the weekend because I do most of the chores during the week. I take care of the little stuff that needs to be taken care of like the bathroom, the clothes, and the living room. It gives us more time to spend with my daughter because we spend a lot of time with our other hanai kids.

Q: Do you see yourself in the same role as a volunteer long after your children have moved on from Momilani Elementary?

A:  We’ll see what happens. My hanai boy is in Kindergarten here so that’s another seven years. They tease me that I’m going to be here for a while. If possible I don’t mind. My two girls are in the fifth grade here too.

Q: Would you say that parent volunteers, such as yourself, play a big role in the success of the school?

A: One big part of why this school is where it’s at is parent volunteering. Parents volunteer a lot here. I try to do my part.

Q: How about being a part of the schools success under the leadership of Principal Higa?

A:  Being here with a Principal like Mrs. Higa is awesome. It’s a team effort. It’s everybody.  I would like to recognize everybody that helps out here, the teachers, the staff, it’s amazing. Mrs. Higa has put together a really good team.

Q: You share a special and unique bond with the students. How satisfying is it to know that you make a difference in their lives as a volunteer at Momilani Elementary School?

A:  I’m their uncle. It’s very satisfying, it makes me feel good. It’s helping out. I understand now about people who really volunteer a lot and how they feel. That satisfaction that they have with their life. I guess it’s meant to be. 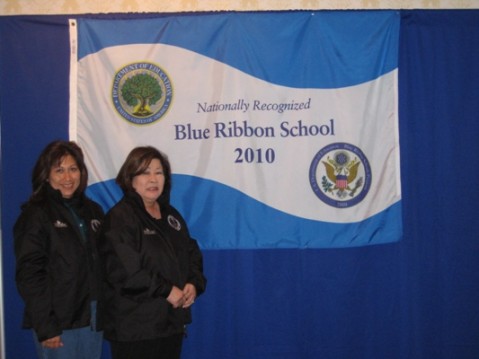 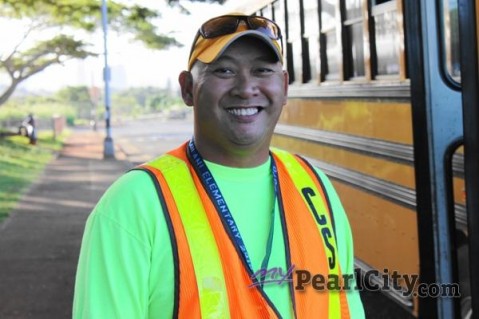 Mr. Poyo pictured on duty, making sure everyone is safely on the bus.