Moanalua and Pearl City kept the game close in the first two periods with the Lady Chargers taking a 15-14 lead at the half. The Lady Chargers took command in the 3rd period outscoring their opponent 14-6 and moving ahead in the ball game 29-20. The 4th period scoring output stayed pretty much even with Pearl City outscoring Moanalua 14-12 for an 11 point victory.

“It was awesome, finally! We haven’t won a first round game since 2002,” said Coach Morton.

The Chargers were excited to get starting Guard, Shawna Angle back in the line up after sitting out the regular season with a foot injury. Shawna joined twin sister Sabrina on the court and went right to work.

"She made a big difference. Shawna hit a 3 and whatever else she did tonight,” said Morton. “When she gets her legs back she’ll be okay.”

“It was great, lots of fun. I got a little tired but it was fun,” said Shawna Angle after playing in her first game this season. 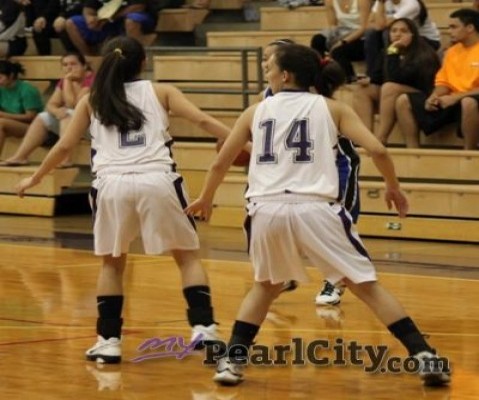 #2 Sabrina (left) and #14 Shawna (right) back together again for the Chargers.

Having Shawna back in the line up for the OIA Red Division Championship Tournament is just what the Lady Chargers needed as they travel to Farrington High School on Wednesday to face the OIA Red East Division Runner-up, Farrington Lady Governors.

“We got Farrington tomorrow. Farrington is definitely mad because they lost to Kaiser and they’re the number two seed,” Morton said. “We got nothing to lose. We’re going to come all out and take it to them.”