The Chargers landed three of their wrestlers on the championship podium led by two time OIA and state champion Raynald Cooper III. In one of the most anticpated and exciting matches of the day, Cooper defeated Radford's Kevin Corbett 7-6 in a thriller that rocked the Leilehua High School gymnasium.

Corbett had a 5-4 lead early in the 3rd period before Cooper turned the tables scoring on a 2-point reversal and would hold on the rest of the way for the championship. It proved to be a much tougher match this time around. In the OIA Western Championships, Cooper had no problem winning the tilte with a 16-6 major decision over Korbett.

How Chargers finished in their weight divisions:

The Pearl City Girls team came up a little short 140.5 – 137.00 against a tough Kahuku Red Raiders squad. The Chargers landed two wrestlers on the championship podium with Charmagne Monis defeating Campbell's Rachel-Jean Factora in the 140 Lbs. division and Sanoe Spencer taking home the gold over Kahuku's Libby Petrie at 220 Lbs.

Kaimiloa Evans had a chance for gold in 120 Lbs. championship match but lost on a decision to Roosevelt's Marisa Fukunaga.

How Chargers finished in their weight divisions: 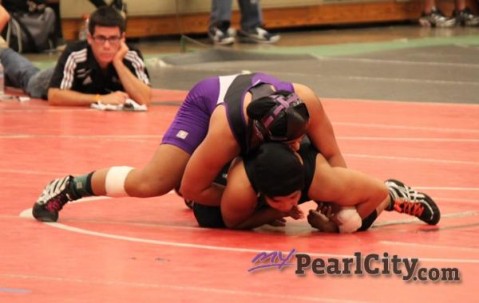 Congratulations to the Chargers!

Good luck in the HHSAA State Championships which will be held on February 11 & 12 (Fri. & Sat.) at Blaisdell Arena.