“The Gold Star not only represents the selfless sacrifice made by the deceased, but was intended to give their family a measure of pride and consolation,” Takai said.

“Hawai'i has several military-related and veteran-related license plates but there is no plate to recognize the sacrifice of Hawai'i Gold Star Families,” Takai said. “The visibility of these special plates on vehicles across the state will help remind us all that many of Hawai'i sons and daughters have made the ultimate sacrifice,” added Takai.

"In the license plate program you have combat veteran, combat wounded, POW's and others. I thought this would be a perfect way to honor our fallen heroes through their family members. What it does is it honors those who have given the ultimate sacrifice. It also honors the family members who raised those great Americans and still have to live with the loss for the rest of their life. It's a daily reminder for the American public, where we spend a lot of our time on the freeway's. When you look at that license plate it honors those heroes and the families," added Colonel Brostrom.

"More importantly it's for our wives," said Combat Wounded Vietnam Veteran Allen K. Hoe who lost his son, Army First Lieutenant Nainoa Hoe, while in battle six years ago in Mosul, Iraq. I have the combat wounded license plate from being wounded in Vietnam. David like my younger son, they are combat veterans and our wives, the mothers of our heroes, they never really get the recognition and the honor that they are entitled to and they deserve. Probably at the end of the day, if someone were to ask Dave's son Jonathan or my son Nainoa who had the greatest influence on your life, it wouldn't have been Dave or me, it would have been the mom's." 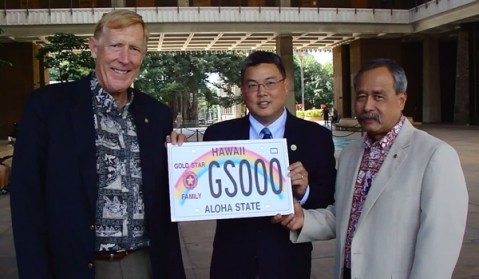 "The Gold Star is perfect because it's an act by Congress, the criteria is already there. Immediate families wear the Gold Star. A lot of people don't know what the Gold Star stands for," said Colonel Brostrom.

'It's a very public acknowledgement," said Takai. They wear these pins but it's difficult past ten yards to see it. On a car license plate you'll see it everyday and you will know that families sacrifice for us."

"My wife would now be able to have a special emblem on the vehicle she drives that clearly identifies the person in that car as a Gold Star Family," said Hoe.

The Senate Committee on Public Safety, Government Operations, and Military Affairs Committee passed out companion Bill 883 (related to special numbered plates) to House Bill 1 with amendments on February 3, 2011. House Bill 1 was scheduled to go back to the Senate floor to the Ways and Means Committee.

If House Bill 1 passes, Gold Star License Plates will be available for families no later than October 1, 2011. 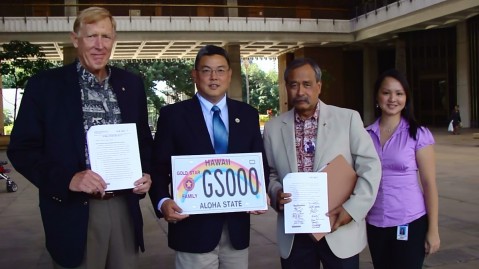