Hawaiian Electric Company workers on Oahu, Maui and the Big Island went on strike at 3:30pm HST on Friday after talks broke down between the International Brotherhood of Electrical Workers Local 1260 and HECO management.

1200 HECO employess are represented by the International Brotherhood of Electrical Workers Local 1260.

About 6000 Ewa Beach homes and businesses were left in the dark tonight as a result of HECO workers walking off the job this afternoon while repairing downed utility poles on Fort Weaver Road. HECO reported that the power should be restored by midnight.

HECO non union personnel workers along with workers from locally contracted businesses have replaced the striking membership from the International Brotherhood of Electrical Workers 1260.

One of the main issues in the negotiations between the two sides is HECO's plans to raise the retirement age from 60 to 62. 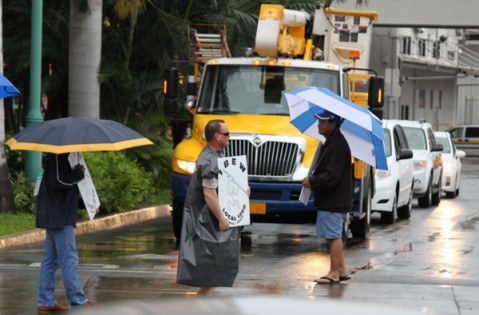 HECO unionized workers from the International Brotherhood of Electrical Workers Local 1260 walk the picket line at the companies headquarters on King Street in Honolulu on Friday.

Early Friday morning, portions of Pearl City experienced power outages from around 4:00am to 7:30am due to high winds and heavy rains that pounded the Leeward side from late Thursday afternoon.  No other problems have been reported since. 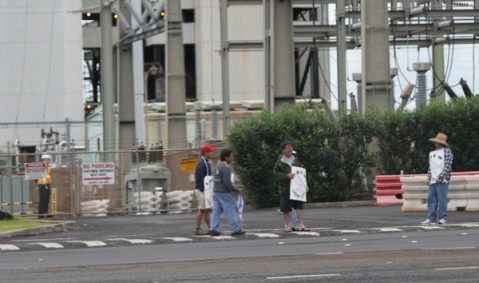 For more than five months, Hawaiian Electric, Maui Electric and Hawaii Electric Light Company have been negotiating a new contract with the International Brotherhood of Electrical Workers Local 1260, which represents our companies' unionized employees on Oahu, in Maui County and on Hawaii Island.

The union gave our companies notice that its members have initiated a strike as of 3:30 p.m., today.

We are disappointed that the union has chosen to take this action, especially since there are still thousands of customers without power following the severe weather that hit overnight. A strike clearly hurts everyone. We have been working to arrive at an agreement that balances the interests of our employees and our customers, and are willing to continue to negotiate.

As part of responsible planning, our non-union employees have been trained and prepared to step in and operate our electric systems to provide our customers with the safe, reliable electric service they expect and deserve.

We will be reaching out to the union for further discussions and hope that we will be able to reach an agreement quickly.