A Waipio victory on Wednesday over Pearl City would have crowned them champions, earning the team a trip to next week’s the state tournament. Pearl City needed a win over Waipio for a chance to play for the championship and they got it. The two teams will meet for the third time in the double elimination tournament on Thursday, at CORP to decide the 2011 District 7 Champions. Game time is set for 3:00pm.

Road to the Championship:

On Wednesday, Pearl City found themselves, once again, as the visiting team and first at bat. Waipio starting pitcher #18 Dillon Gabriel got Pearl City’s lead off batter, Carter Hirano to pop out for out number one in the top of the first inning. Next batter, Cheyne Obara popped out to third base for the second out. Gabriel struck out Nohealani Hee for the third out of the inning.

Hee took the mound for Pearl City in the bottom of the first inning. Hee walked Waipio lead off batter, Jordan Donahue. Next batter, #8 Zach Lafata hit an infield grounder that forced Donahue out at second base. #11 Shaydon Kubo hit a single that moved Lafata in scoring position on third base. #13 Braedon Joines came in to pinch run for Kubo. Joines stole second base putting runners on second and third with one out. Hee struck out pitcher, Dillon Gabriel and pinch hitter, Kailyn Barret for the second and third outs to end the inning.

Pearl City came back to tie the score in the top of the third inning on an RBI single by Carter Hirano that scored Tarynce Antolin from second base.

In the bottom of the third inning, Hee kept Waipio batters in check allowing one hit but struck out two to end the inning.

Pearl City blew the game wide open in the top of the fourth inning, scoring five runs to take a 6-1 lead. With two outs, Gabriel walked #5 Cole Miyamura. Next batter, Cello Casarez hit an infield single that advanced Miyamura to second base. Gabriel recorded walk number two in the inning putting Tarynce Antolin on first base and loading the bases with two outs. Next batter, Chaesten Chon hit an infield grounder that bounced off the second baseman scoring Miyamura from third base. Chon reached first base on the play. Carter Hirano stepped up to the plate with two outs and bases loaded. Hirano drilled a pitch to right field that kept on rolling, clearing the bases and bringing in four runs on an in-the-park Grand Slam play. Waipio made a pitching change bringing in #55 Micah Kaohu with two outs in relief of Gabriel who pitched 4 and 2/3 innings. Kaohu got Hee to ground out for the third out.

Waipio got two runs back in the bottom of the fourth inning. Jordan Donahue hit an RBI single with two outs that scored Breyndon Nakamura from second base. Zach Lafata hit a ball that bounced off of Pearl City shortstop, Hirano that scored the second run of the inning. Pearl City made a pitching change with two outs, sending Hee to first base and Caleb Young from first base to the mound. Hee pitched 4 and 2/3 innings. Young recorded the third out to end the inning.

In the top of the fifth inning, Pearl City added three insurance runs to increase their lead to 9-3. Waipio made another pitching change bringing in Zavvn Agbulos in relief of Kaohu with a 3-2 count onlead off batter. Agbulos threw a ball on his first pitch, walking Caleb Young. Next batter, Brayden Nomura hit a single to center field that moved Young into scoring position on third base. Nomura stole second base. Cole Miyamura struck out for out number one. Young scored on a pass ball at the plate. Cello Casarez hit an RBI single that scored Nomura from third base. Waipio made another a pitching change bringing in Jordan Donahue in relief of Agbulos. Tarynce Antolin grounded out to Donahue for out number two. On the play, Casarez moved up to second base. Chaesten Chon hit an RBI double to left field scoring Casarez from second base. Hirano grounded out to the shortstop for out number three.

Both teams were held scoreless in the rest of the way. 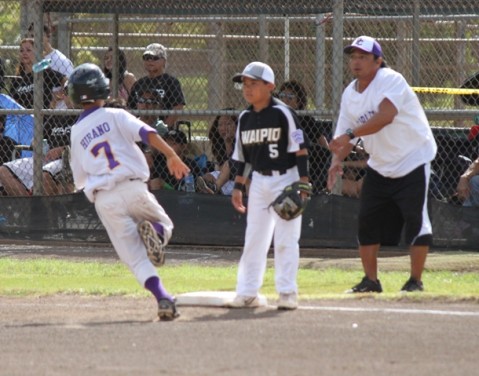 #7 Carter Hirano making the turn at third on his way home after hitting a bases loaded in-the-park homerun in the 4th inning off of Waipio starting pitcher, Dillon Gabriel. 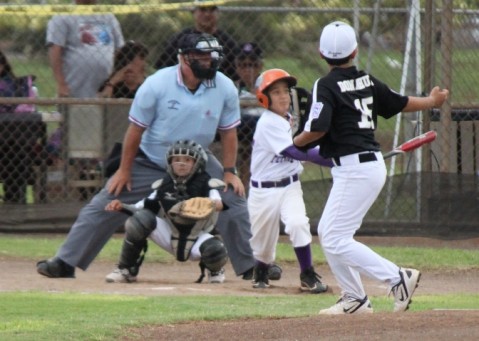