Pearl City advances to Tuesday's next round with their opponent to be announced. First pitch is set for 4:00pm. Kailua was eliminated from the tournament with the loss to Pearl City in the double elimination tournament format.

Pearl City continues to battle their way through the loser's bracket after an opening round 2-1 loss on Friday, June 17 to MKH. Since then, Pearl City has defeated Waialua 11-1, Ewa Beach 8-2 and today's 12-2 victory over Kailua.

Kailua opened Monday's game by taking a 2-0 lead in the top of the first inning. Kailua starting pitcher, Kaina Tagupa was cruising along, pitching a shut out and pretty much in control of the Pearl City battery until he ran into trouble in the bottom of the fourth inning. Tagupa was relieved after giving up three runs and the lead in the inning. Pearl City busted it wide open, erupting for eight runs on four hits in the bottom of the fourth inning.

Bottom of the fourth lead off batter, #18 Alihikaua Rodrigues got on base after hitting a fly ball to centerfeld that was dropped. Next batter, Mason Cordero hit a single advancing Rodrigues to second. Darian Obara came into the game to pinch run for Cordero at first base. #5 Brannon Liu struck out for out number one. Kulia Neal walked.Runners advanced on a pass ball. Next batter, #20 Jzayven Moreno tied the game at 2-2 on a 2 RBI double that scored Rodrigues from third and Obara from second. #2 Kanoa Meredith got on base on error at third base. Bases were loaded. Next batter, Kawika Akutagawa got hit by a pitch scoring Kulia Neal from third base. Obara re-entered the game to pinch run for Akutagawa at first base. Kailua made a pitching change bringing in #55 Joseph Kahalewai in relief of Tagupa. Next batter, Ethan Kwon was hit by the first pitch from Kahalewai that put Kwon on first base and scored Moreno from third. Kahalewai walked #10 Kahiau Anderson that scored another Pearl City run. Obara scored on a pass ball at home plate. Next batter, Rodrigues hit a two RBI single that scored Kwon and Anderson with one out in the inning. Rodrigues hustled to take second base. Kailua made another pitching change bringng in #32 Nathaniel Colman in relief of Kahalewai with one out in the inning. Cordero popped out for out number two. Next batter, Brannon Liu lined out to first base for the third out. Pearl City took an 8-2 lead going to the top of the fifth inning.

In the top of the fifth inning, Kailua put two runners on base with no outs . Pearl City made a pitching change, bringing in Darian Obara in relief of Rodrigues. Obara held Kailua batters in check, getting out of the inning with no runs across.

Pearl City put it away in the bottom of the fifth inning. #21 Marcus Boyles led off with a double. Boyles advanced to third base on a pass ball at home plate.  Next batter, Jzayven Moreno walked putting runners on first and third with no outs. Moreno took second base on a steal. Kailua made a pitching change, bringing in #99 L. Ching in relief of Colman. Ching walked #9 Hunter Robello. Bases loaded. Darian Obara hit a ball to left field that was dropped, scoring Boyles from third. Next batter, #1 Sam Prentice hit a triple to left field driving in three runs to put Pearl City up 12-2 and ending the game due to the 10-run mercy rule. 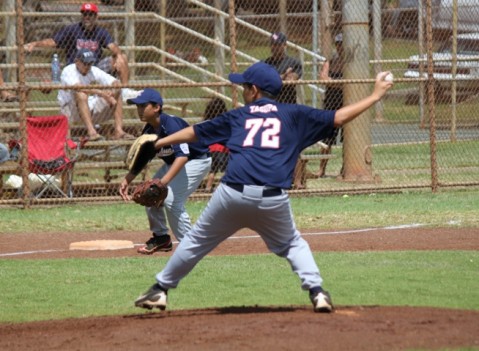 #72 Kaina Tagupa on the mound for Kailua in the Hawaii Little League 10-11 State Championship Tournament against Pearl City on Monday, June 20, 2011. 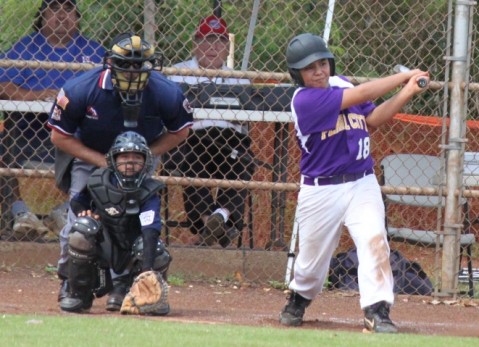 Pearl City's, Alihikaua Rodrigues earned the win on the mound and also contributed at the plate, pictured here hitting a 2 RBI single in the bottom of the fourth inning. 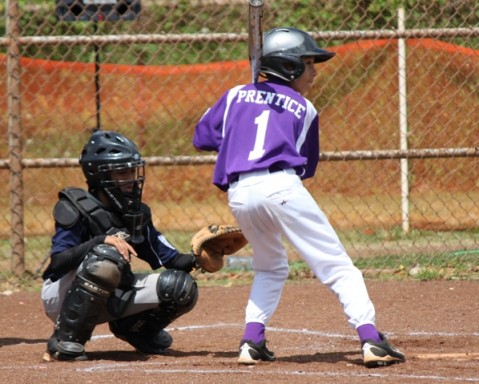 #1 Sam Prentice sealed the win for Pearl City with a triple that brought in three runs in the bottom of the fifith inning that forced the 10-run Mercy Rule and ended the game at 12-2.