The Waipio Little League program put another notch in their championship belts with a 6-3 victory over Pearl City in the 2011 Hawaii Little League State Championship Tournament  for 10 & 11 year olds at Aikahi Elementary School in Kailua on Thursday, June 23, 2011.

Pearl City forced a game two on Thursday after defeating their cross town rivals from Waipio 3-1 earlier in the day. Waipio entered game one undefeated in the double elimination format tournament with a 4-0 record while Pearl City came in at 5-1. Pearl City lost to MKH (Makakilo/Kapolei/Honokai Hale) 2-1 in the opening round on Friday, June 17 but avenged that loss on Wednesday, beating MKH 7-5, setting up Thursday's doubleheader with Waipio.

Waipio jumped out on top of Pearl City in game two with two runs off of starter, Mason Cordero. Waipio scored their two runs on two hits and left one runner on base to take a 2-0 lead.

Pearl City had bases loaded in the bottom of the first when Waipio starting pitcher, Justin Ogasawara walked Brannon Liu, scoring Kahiau Anderson from third base. Next batter, Kawika Akutagawa hit an RBI single to right field that scored Alihikaua Rodrigues from third base and tied the game at 2-2. Jzayven Moreno followed with an RBI single to left field that scored Mason Cordero from third base putting Pearl City up 3-2. In the bottom of the first inning, Pearl City scored three runs on four hits and left three runners on base.

Waipio scored three runs in the top of the fifth inning that was highlighted by a three run homerun blast by #6 Logan Yee off of relief pitcher, Kanoa Meredith that bounced off the roof of the park pavilion, way beyond the left field fence.

In the bottom of the fifth inning, Waipio made a pitching change bringing in #12 Kona Respicio in relief of Ogasawara with one out in the inning. Respicio got out of the inning with Pearl City leaving two runners on base.

In the top of the sixth inning, Waipio added one more run to put them up 6-3 over Pearl City. Waipio scored one run on four hits and left the bases loaded.

Respicio got Pearl City to go down 1-2-3 in the bottom of the sixth inning for the win and championship title.

In the first game, Marcus Boyles went the distance, pitching six complete innings to earn the victory for Pearl City. Waipio's, Carson Okada pitched five complete innings before being relieved after reaching the maximum amount of pitches allowed for the tournament.

The game was scoreless until the bottom of the fifth inning when Waipio got on the scoreboard on an RBI single by Chase Ling with two outs that scored Carson Okada from third base. Waipio took a 1-0 lead going to the top of the sixth innning.

With one out in the top of the sixth, Pearl City's Alihikaua Rodrigues crushed an Okada pitch over the center field fence for a solo homerun that tied the ball game at 1-1. Next batter, Mason Cordero struck out for the second out of the inning. Pearl City shortstop, Brannon Liu walked and took first base. Waipio's starting pitcher Okada, reached his pitch count limit for the game and was relieved by #99 Koa Matsumoto with two outs in the inning. #15 Kawika Akutagawa tagged a Matsumoto pitch for an infield single that pushed Liu to second base and put Akutagawa on first. Next batter, Jzayven Moreno stroked an RBI single to right field that scored Liu from third base. Moreno advanced to second base on a pass ball at the plate. Marcus Boyles hit an RBI single to left field with two outs that scored Akutagawa from third. #1 Sam Prentice hit a fly ball to center field that was caught to end the inning. Pearl City scored three runs on two hits and left two runners on base.

In the bottom of the sixth inning, Boyles retired Waipio batters, 1-2-3 on three strikeouts to end the game and come away with a 3-1 win and another shot at Waipio for the state championship. 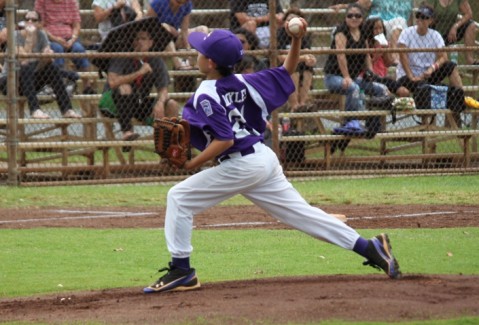 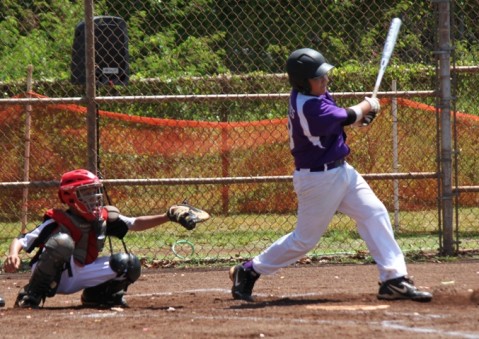 #18 Alihikaua Rodrigues pictured hitting a solo homerun over the center field fence in the top of the sixth inning against Waipio in game one on Thursday. 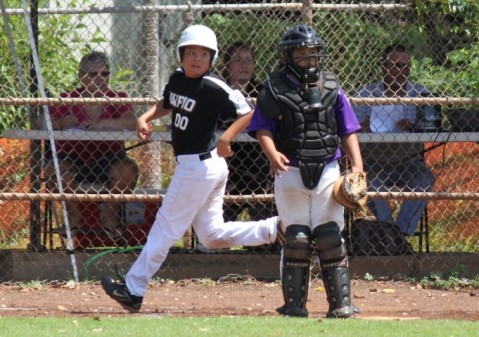 Carson Okada scores for Waipio in game one in the bottom of the fifth inning off of Chase Ling's RBI single. 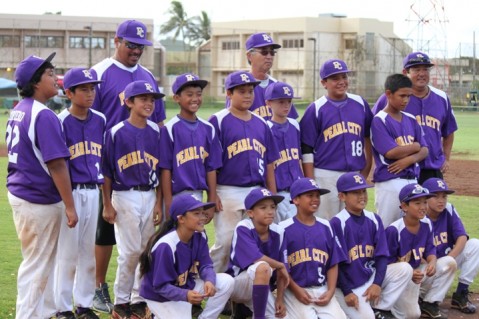 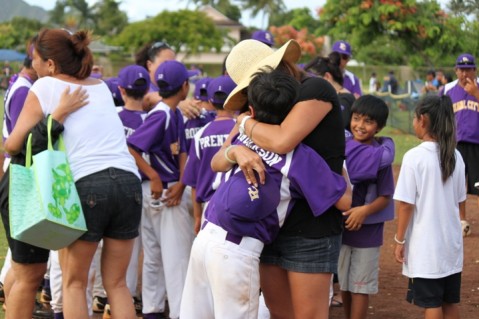 Congratulations to the Pearl City team and coaches for an awesome performance during the tournament! Also, to the parents, family and friends for their support of an incredible bunch of talented ball players who represented the Pearl City community with pride and great spirit.