Full Bloom at the UGC Rose Garden in Pearl City

The Honolulu Rose Society is enjoying a summer of blossoming rose plants that fill the new rose garden beds at the Urban Garden Center (UGC) in Pearl City.

“It’s absolutely beautiful,” said Myrna Cariaga, President of the Honolulu Rose Society. “Actually, just as you’re coming up from the pathway, entering into the garden, it’s just a spectacular burst of colors.”

The UGC Rose Garden is the product of many hours of hard work put in by the Honolulu Rose Society membership, Urban Garden Center Master Gardeners, and volunteers representing community organizations. 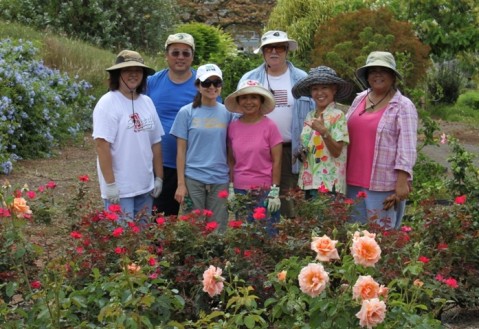 “It’s a nice welcoming effect for the garden and we have intentions to continue on to the entrance of the actual garden itself,” Cariaga said.

Nine varieties of donated rose plants are currently thriving and on display at the UGC Rose Garden for the public to enjoy and experience.

“We have about ten of each of the nine varieties which have been donated by Star Roses which is a mainland company,” Cariaga said. “We do have other rose breeders that would like to represent in the garden. That would be the next phases onward.”

Many of the donated UGC Rose Garden roses are French bred roses.

“They do very well here because in France it’s a similar kind of climate,” Cariaga said. “A lot of them were actually grown in my garden, so they are actually grown based on my experience but with the help of our very good friend in the mainland, Dr. Tommy Cairns. He helped us get this donation from Star Roses.”

The new rose garden has helped increase the Honolulu Rose Society membership in 2011 which has benefited the UGC with more volunteers available for weekly gardening chores.

“Currently we have little less than one-hundred members in our society, maybe about ninety, right now,” Cariaga said. “We’re slowly growing because of the activity in the rose garden. We have a set schedule. We come once a week. First Saturday would be the most amount of volunteers that you would see because they are preparing for the second Saturday viewing for everyone to come and see. The second week there will be another group of volunteers, the third week there will be another group of volunteers, so it will be one day each week throughout the month.”

honolulurosesociety.org. You can also join at the Urban Garden Center in Pearl City located at 955 Kamehameha Highway.

“You don’t have to join the Honolulu Rose Society to work with the roses,” said Cariaga in reference to becoming a part of the group of volunteers helping out at the rose garden. “It’s just that we would like to teach them a few things when their working in the garden.”

To learn more about how the UGC Rose Garden came to life, check out the following links below:

The Honolulu Rose Society is taking protective measures to help prevent rose plants from being stolen.

“What we’re doing, the Honolulu Rose Society, is now we are marking it with a white spray paint at the base of the roses, Cariaga said. “Initially what the Urban Garden Center was doing is marking the ground around the roses with a blue paint. It’s very notable that their stolen.” 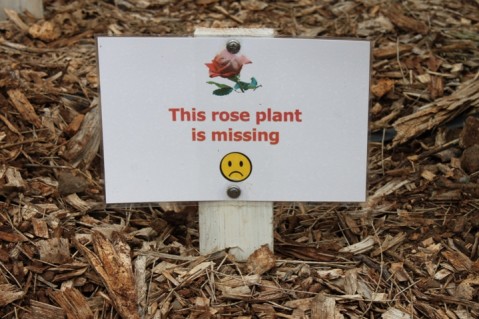 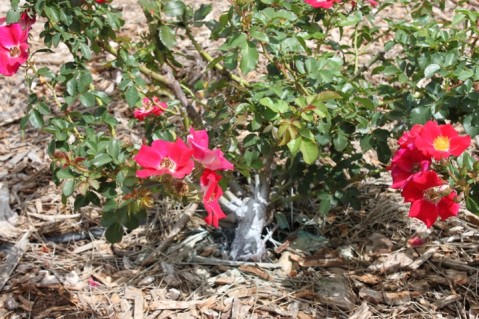 White paint sprayed on the base of UGC Rose Garden plants to prevent and to identify stolen plants.