The Pearl City Chargers hit the road on Saturday to open the 2011 Oahu Interscholastic Association (OIA) White Division regular season and came away with a 47-6 win over the Anuenue Rainbow Warriors at Waialua High School.

The Chargers controlled the ball game against the Rainbow Warriors from the opening whistle scoring first on an 8 yard touchdown run by #8 Shawn Lopez at 5:18 in the first quarter. The extra point attempt failed. Pearl City took a 6-0 lead.

The Chargers increased their lead to 14-0 over Anuenue after Pearl City wide receiver #1 Kelson Laboy pulled in a 28 yard touchdown pass from Kaimi Paredes with 2:22 remaining in the quarter. #4 Rakeel McMillian scored on a 2 point conversion attempt.

Pearl City running back #32 Noah Derby padded the Chargers lead with 5:42 remaining in the second quarter, scoring on a 32 yard touchdown run. David Laranol converted the extra point kick and the Chargers led 21-0 where it remained entering the half.

In the third quarter, #4 Rakeel McMillian punched in another Chargers touchdown on a 4 yard run with 10:18 on the clock. Laranol converted the extra point increasing the Chargers lead to 28-0.

Anuenue got on the scoreboard in the third quarter on a 18 yard fumble recovery for a touchdown by #4 Malaeloa Liua. The extra point conversion failed.

Pearl City's Laboy made a statement with a 58 yard touchdown connection from Paredes at 5:33 in third quarter. Extra point conversion good. The Chargers entered the fourth quarter with a 35-6 lead over Anuenue. Laboy led all receivers with a game high 97 yards on 4 receptions and 2 touchdowns.

In the fourth quarter Pearl City added another touchdown after they attempted a field goal with 8:52 in the quarter that was blocked and then picked up by Pearl City's Keanu Harris who ran it in for 6 points. The extra point attempt failed.

The Chargers final score came on a 10 yard touchdown reception from QB Angel Aponte to Noah Derby at 5:01 left in the quarter. The extra point failed. Pearl City went up 47-6.

Rakeel McMillian led the Chargers rushing attack with 57 yards on 7 carries and 1 touchdown.

Malaeloa Liua was the top ground gainer for Anuenue rushing for 99 yards on 19 carries.

Pearl City (1-0 OIA White) has a bye next week and will travel to Nanakuli to play the Golden Hawks on Saturday, September 3 at 7:00pm. Anuenue (0-1 OIA White) takes on Kaimuki at Kaiser on Saturday, August 27. Kick off is set for 6:00pm. 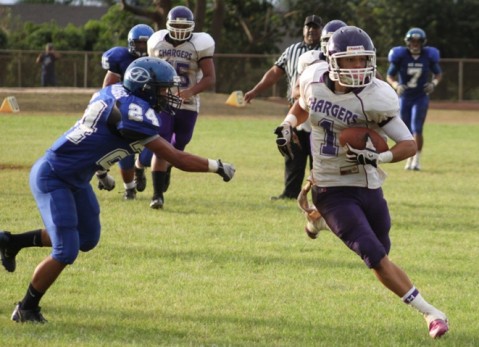 Pearl City's #1 Kelson Laboy breaks away from a Anuenue defender #24 Kainoa Keli Nahaku on his way to a 58 yard touchdown reception from QB Kaimi Paredes in the 3rd Qtr. 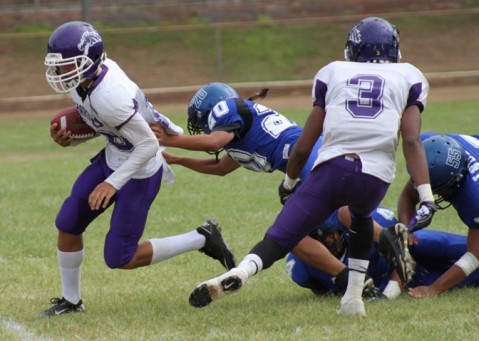 Pearl City QB Kaimi Paredes passed for over 158 yards but also spent time on the run from the Anuenue defense pictured here avoiding the grasp of #20 Kakela Lee. 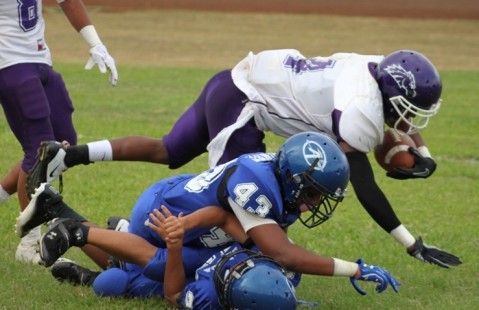 Rakeel McMillian powers into the end zone for a 2 point conversion in the 1st Qtr. 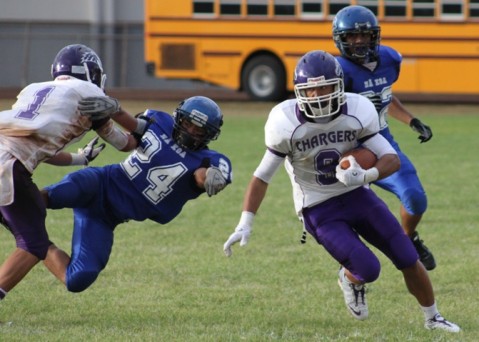 #9 David Laranol gets help from #1 Kelson Laboy as he makes his way upfield in the 3rd Qtr. 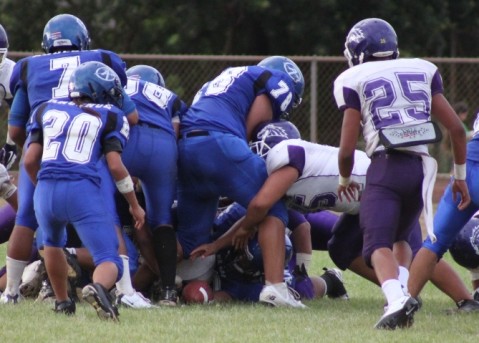 The Chargers defense held Anuenue to 6 points with tough play and hustle. 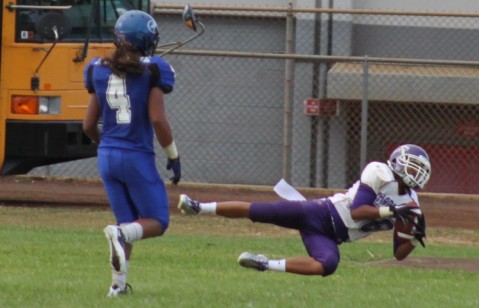 Pearl City DB #28 Justyn Dela Cruz pulls in an interception near the Chargers 10 yard line to stop an Anuenue drive late in the 2nd Qtr. 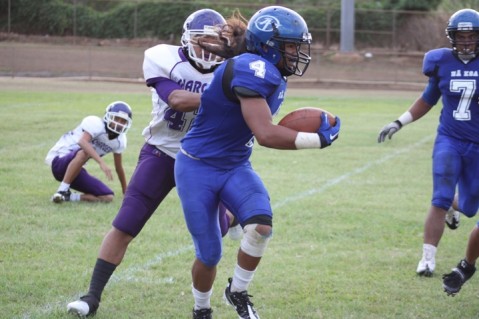 #4 Malaeloa Liua had a productive game on the ground for Anuenue rushing for 99 yards on 19 carries.