Pearl City High School Principal, Carlyn Fujimoto leads one of the state’s largest public school campuses with an enrollment of about 1800+ students from grades 9-12. Fujimoto has just begun her 5th year at the helm and like her two previous years she faces the task of leading her staff and students through the turbulent financial times that has drastically changed how the Hawaii Department of Education (DOE) operates on a daily basis.

It’s a game of survival and Fujimoto has set her sights on continuing to build on creating positive situations out of the negative forces that is attempting to chip away at the core of  her schools foundation for success.

PCHS teachers, as well DOE teachers across the state are under attack. They have learned to adjust to Furlough Friday’s that reduced instruction time in their classrooms while on the horizon contract negotiations took a wrong turn as they prepared for the 2011-2012 school year.

The 2011-2012 school year has added teacher pay reductions, an increase in health care plan costs, loss in days spent preparing their classrooms for the new school year, budget cuts affecting school programs and a battle with the Governor over contract negotiations.

You would think that teacher moral would be in the tank with all the dark clouds swirling overhead but that’s not the case for Fujimoto and her PCHS teachers, staff and students. The teachers have dedicated themselves to doing what’s right and in the best interest of their students no matter what the costs and the students have reciprocated with measurable improvements in the classroom.

They say that leadership starts from the top. In my opinion a true leader surfaces at ground level, building upon layer by layer a foundation for all to rise above. Together.

Principal Fujimoto is on a climb with a few obstacles in her way but nothing that her current PCHS administrators, teachers, staff, students, alumni and community supporters can’t overcome. 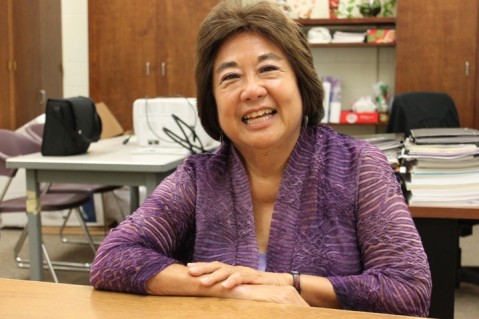 Q: How are your teachers handling the current situation with contract talks and the effect that it has on their ability to teach through all the adversity they face?

A: Actually for our school I would say this stems back even from two years ago. I think the effect on when we originally had to live through furlough days, it did take a toll on the teacher’s ability to create or look at how they had to change instruction. That put undue stress on them.

Q: What effect has furlough Friday’s had on the PCHS student body?

A: For the students they somewhat enjoyed having the time off and so now their kind of used to that system where they were getting the furlough days.

Q: Have you been able to see positive growth and improvement from both teachers and students at PCHS in the last couple of years?

A: I really believe that the teachers that we have here are creating and working on great stuff. The initiatives that we’re starting to do are paying off. In fact, we were just talking about our 10th grade teachers this year who have seen the growth and maturity of students in the 9th grade going into the 10th.

Q: What bothers you the most about the current situation affecting your teachers?

A: What I don’t appreciate are two things. Number one is the lack of maybe respect that the teachers do have a lot to offer in terms of what they see best for the kids and the education. The second thing is the money part. Many of the funding that we’re currently getting through the Legislature, they are considering certain programs being cut.

A: For example, one of the things we wanted to start at Pearl City High School was the ROTC. If they do cut the funding for that, we’re going to be totally out of the consideration to even have a program like that. To me, it’s all about student choice and so when you block out things like that, the kids are the ones that always lose out.

Q: Do you feel that PCHS would be better off having its own autonomy to make decisions with regard to what’s best for the school?

A: If we look at what’s happening politically and what’s right, I think teachers are very much willing to put in the time and the effort for the students. Sometimes if you allow the schools to figure out what’s best, that’s the more effective way of running a school.

Q: Your opinion on the position that Governor Abercrombie has taken with the teachers after the teachers union (HSTA) supported him during his campaign in 2010?

A: I believe that when you get the support of the union, unfortunately for the Governor, he did get the support from the teachers. And I think his campaign, if you sort of followed it, he did capitalize a lot on education and his mother being a former educator.

That’s really a slap in the face where again you’re not considering what the teachers are saying that’s best for the students. The way that this is playing out in courts system doesn’t hold well where as a teacher, and looking at the economy, you probably are very torn about the reduction in your pay, and yet what if the choice is also to strike.

Q: Do you see a potential teachers strike on the horizon?

A: No. The crux of this is that I think they were left to feel like there was no choice. It wasn’t even put to a vote. Whereas for us, we were actually able to put it to a vote through the HGEA. In other words, the membership did vote on what the contract proposal was. In the teacher’s case, they didn’t even have that consideration and school started.

Q: How about the reduction in days allowed for teachers to get into their classrooms to prepare for the start of the new school year?

A: The thing that was upsetting all around for us is that at the beginning of the school year we really had a good plan that we were going to start off with the four days. If we could have used the four days wisely, than it would have given us the opportunity to provide that kind of professional development because that would have been a time when students don’t come to school. A lot of the initiatives that we’re trying to do you need to work with the staff.

Q: How would you have used the four days?

Q: What is the difference between a furlough day and mandatory directive leave?

A: The other dilemma is that they are calling it a mandatory directive leave without pay. It’s not a furlough because the difference is that if furloughs were sanctioned again, than that meant a total shut down of the school. The craziness is that teachers are directed not to come. But people like the custodians, the cafeteria, myself, we’re here.

Q: Do you feel that the teachers were actually left out in the cold with regard to the decision making process on such issues as the decrease in pay and health fund costs that split at 50/50 between member and provider.

A: I think if the teachers had a better and clearer perspective of what was going on they probably would have had an easier time making a decision. Two things happened at the same time that I think they weren’t given the full awareness. Number one was the decrease in pay and how it would be affected with these directive leave days.

The second thing and more importantly is the cost of the health fund. The health fund from my perspective is if you do have a family and you carry that family load, the 50/50 probably could have been explained better in making that decision.

Q: How have your teachers been affected by the increase in their health plan costs?

A: I have had teachers tell me that they may have gone from about a hundred dollars a month to triple the amount to three hundred something a month just for the coverage for the plan. That’s a lot of money.

Q: What is your opinion on the way the HSTA is handling contract negotiations?

A: The interesting thing to me is that the difference is for HSTA it seems like its harsh when they say, “last, best, final offer.” Verses for the other unions it wasn’t said like that. You were told or least explained what it was and then you had the choice as a union member to vote. I don’t think the teachers had a choice. It was just a done deal.

Q: What type of response do you get from the union when information breaks in the local media regarding contract talks?

A: They always tell us that sometimes what the media story is may not always necessarily be what it is. Most recently what was ironic is when the Governor went to Kauai and said something about wanting to do the mediation but now its too late.

Q: What is the current moral level of your teachers and what do you feel concerns them the most?