Pearl City starting Quarterback Kaimi Paredes led the Chargers to a 27-12 victory on the road against the Nanakuli Golden Hawks on Saturday to remain unbeaten at 2-0 in the Oahu Interscholastic Association Varsity Football White Division.

Paredes passed for over 200 yards for the second game in a row, completing 15 of 27 for 210 yards with 2 touchdowns and 2 interceptions. He also rushed 10 times for a game high 76 yards and 2 touchdowns.

The Chargers executed a balanced offensive attack against the Golden Hawks, putting up 214 yards through the air and 235 yards on the ground for a net total of 449 offensive yards to Nanakuli's 137.

Pearl City's Kelson Laboy was tops on on the receiving end, catching 6 passes for a game 116 yards and 1 touchdown. Charger running back tandem of Noah Derby (8 rushing attempts for 68 yards) and Rakeel McMillian (6 rushing attempts or 53 yards) grinded out 121 yards on the ground.

The Golden Hawks got the on the scoreboard with early in the first quarter on a 3 yard touchdown run by #30 Khade Paris to take a 6-0 lead over the Chargers. The extra point conversion attempt failed.

Pearl City's Kelson Laboy tied the game at 6-6 with 11:08 left in the 2nd quarter on a 16 yard touchdown reception from Paredes. David Laranol ran in a fake PAT attempt for a 2 point conversion to put Pearl City up 8-6.

The Golden Hawks came back with 6:50 left in the 2nd quarter on an 8 yard touchdown run by Nanakuli QB #11 Brandon Felisi who picked up a fumble in the Nanakuli back field and ran it in for the score. The Golden Hawks 2 point conversion attempt failed. Nanakuli went ahead 12-8 and would take that lead into halftime.

In the second half, Pearl City's stingy defense kept Nanakuli out of the end zone. The Chargers offense went to work putting up two scores in the 3rd quarter on a 6 yard touchdown run by Paredes (PAT good) with 7:00 minutes left and on an 8 yard touchdown pass at 2:13 left in the quarter from Paredes to #84 Joe Hammond (PAT attempt  failed). Pearl City took a 21-12  lead over the Golden Hawks going into the 4th quarter.

In the 4th quarter Paredes scored his second rushing touchdown with 6:45 on the clock on a 4 yard run that put the Chargers up for good at 27-12 (PAT attempt failed).

Coach Kai Kamaka and his Pearl City Chargers return home to Edwin "Bino" Neves Stadium on Friday, September 9 for their Homecoming game against the McKinley Tigers. Kick off is set to follow the 5:00pm Junior Varsity game. 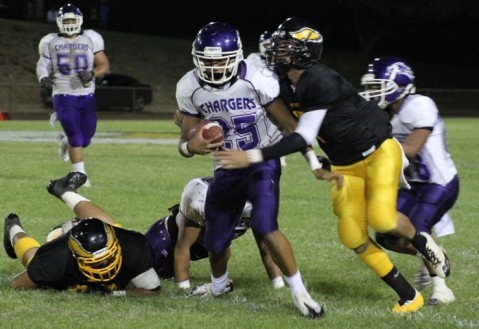 The Chargers played tough on defense up front and in the defensive backfield against the Golden Hawks. Charger DB's picked off three Nanakuli passes in the game. #25 Kapena Akiona pictured here running up field after intercepting Nanakuli's Brandon Felisi in the 3rd quarter. 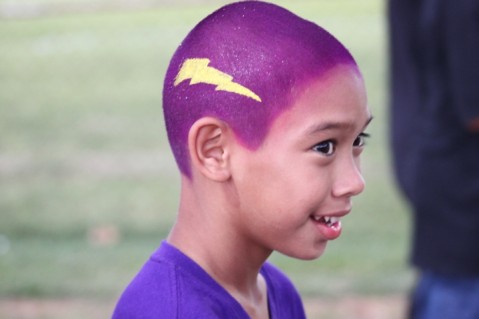