The Pearl City Chargers had their way with the visiting McKinley Tigers last night winning both the junior varsity contest 39-14 and varsity 31-20 during Homecoming held at Edwin "Bino" Neves Stadium on the PCHS campus.

Chargers QB Kaimi Paredes was once again unstoppable leading the varsity with 377 yards of total offense against the McKinley Tigers defense. Paredes topped the 300 yard mark through the air for the first time this season completing 15 of 29 for 303 yards with 4 touchdowns and 1 interception. He also rushed for 74 yards.

In his three regular season starts for 2011, Paredes has passed for over 773 yards with 8 touchdowns and has rushed for 196 yards on 36 carries with 2 touchdowns.

"He's actually coming around," said Chargers head coach Kai Kamaka. "He's going through his progressions well and he can run too. He can find guys on the run."

McKinley QB #15 Alex Ironside led the Tigers through the air completing 24 of 47 for 233 yards with 1 touchdown. Ironside also threw 3 interceptions.

On defensive side of the ball, the Chargers exhibited a tough, smash ball oriented attack led by senior linebacker Troy Barboza Scanlan.

"Troy and our defense is playing really well," Kamaka said. "A lot of people don't know that we had the #1 defense last year in our league. We're playing really good defense right now."

Pearl City got on the scoreboard first on Kelson Laboy's 85 yard opening  kick off return to give Chargers a 6-0 lead. The extra point attempt by David Laranol failed.

McKinley tied the game at 6-6 on a 2 yard touchdown run by Jay Alcala at 5:27 in the first quarter. Extra point attempt failed.

Paredes threw his second touchdown pass on a 20 yard connection to Laboy with 8:48 on the clock in the 2nd quarter to increase the Chargers lead to 18-6. Pearl City attempted a 2 point conversion that was no good.

Pearl City stopped a McKinley drive on the Chargers 4 yard line as Chargers defensive back Tanner Tokunaga jumped on a McKinley fumble with 6:11 on the clock in the 2nd quarter.

Diacorri Briscoe halled in his second touchdown reception of the game on a 29 yard toss from Paredes with 3:51 remaining in the 2nd quarter. Laranol extra point attempt good. Pearl City took a 25-6 lead into halftime.

In the 3rd quarter, Paredes threw his 4th touchdown pass of the ball game on a 15 yard strike to Adrian Hall-Fonoimoana with 3:10 on the clock. Extra point attempt failed. Pearl City took a commanding 31-6 lead.

The Tigers came back in the 4th quarter putting up 2 touchdowns to close the gap  to 31-20 and the final score.

Rakeel McMillian was second to Paredes 74 yards on the ground rushing for 44 yards on 4 carries.

McKinley's Jordan Aikau led all Tiger receivers with 6 catches for 78 yards. Aikau was followed by Jace Bolosan, 5 catches for 58 yards and Will Rollman who caught 7 passes for 55 yards.

Teammate Fia Duarte picked up 58 yards on the ground for the Tigers.

Pearl City improved their record to 3-0 and will play Kalani at Kaiser on Saturday, September 17. Junior Varsity kicks off at 4:00pm with the varsity to follow 25 minutes after the end of the JV contest. 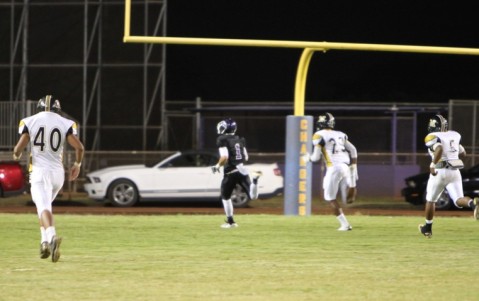 Pearl City's Kelson Laboy pictured returning the opening kick off 85 yards for a touchdown against McKinley. 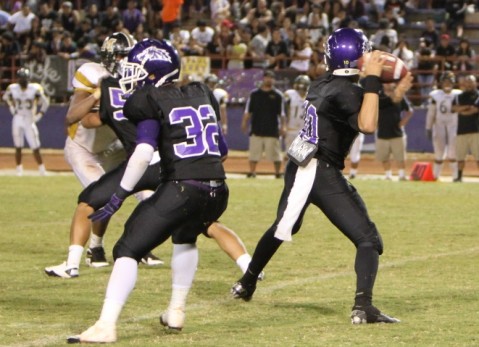 QB Kaimi Paredes taking aim on his target during Pearl City's 31-20 win over McKinley. Paredes passed 303 yards and 4 touchdowns against the Tigers. 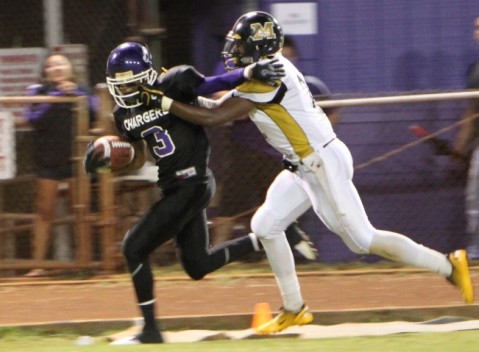 Diacorri Briscoe caught 5 passes for 171 yards and 2 touchdowns. Briscoe pictured trying to shake the grasp of McKinley's #2 Fia Duarte on his way to a big gain. 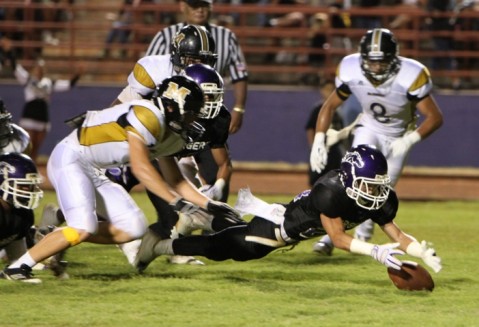 Tanner Tokunaga pictured jumping on a fumble near the Chargers end zone stopping a McKinley drive in the 2nd quarter. 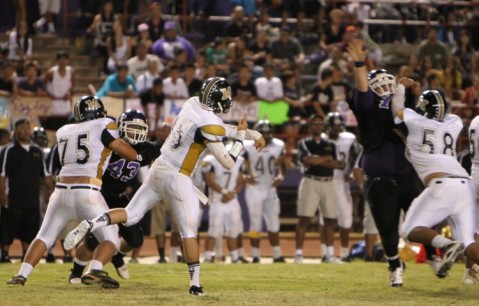 The junior varsity put together an impressive 39-15 homecoming night victory overpowering the Tigers to improve their OIA White Division record to 2-0. 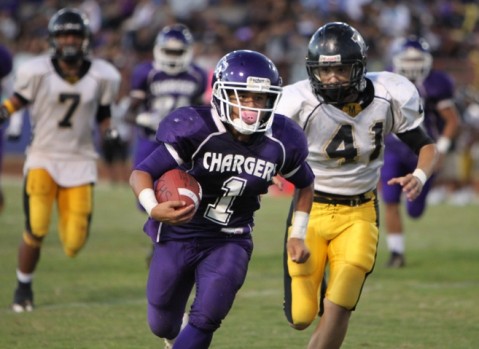 Pearl City's #1 Timothy Rivera pictured on his way to a Chargers touchdown against McKinley. 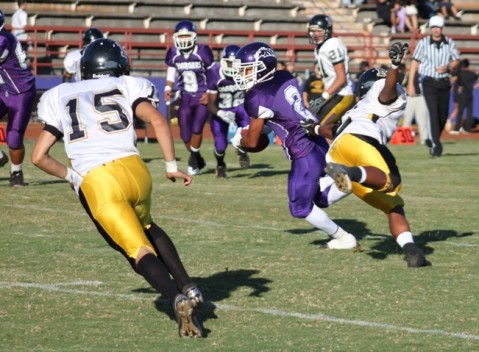 Pearl City's #2 Tristin Kamaka breaks a tackle for a gain against the Mckinley defense. 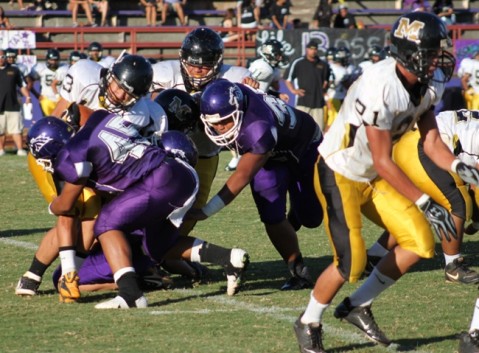