Samahan when translated into English means "Gathering or "Gathering of…" Gathering of Eskrimadors! The Samahan Crest represents the Philippine Eagle, also known as Haribon or Haring Ibon – King of the Birds.

The new electronic scoring system allows all competitors to spar continuously with points being totaled as the match progresses. There are no referee interruptions in the new system for points totaling.

Lighter and faster weapons have been created and incorporated in the Samahan tournaments to allow competitors to take advantage of the continuous sparing scoring format.

Saturday's tournament got under way with the doors opening to the public at 9:00am. Competitors registration followed with a Fighter's Briefing and Safety Briefing held at 9:45am. At 10:00am there was gathering of all schools/fighters as well as opening remarks, National Anthem, Hawai'i Pono'i and the Philippine Anthem.

Caranza/Forms Division for Youth, Women and Men got things under way followed by the presentation of Caranza winners.

Main Events in the above mentioned fighting divisions entertained the crowd coming out of the lunch break along with Grand Champion Matches between Women & Men's Advance Fighting Divisions that led into the Presentation of Champions Awards Ceremony.

"Samahan was created by Eskrimadors, for Eskrimadors, in order to allow for greater opportunities of showcasing and perpetuating the art. Samahan was developed with the intent of fostering sportsmanship and goodwill between Eskrima practitioners through good-natured competition."

Congratulations to all the Eskrimadors for a great tournament and experience in the Art of Samahan! 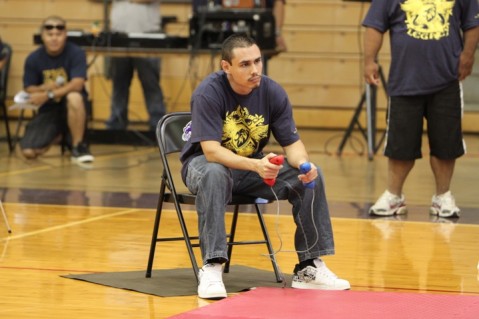 The new electronic scoring format allows a judge to score points for each competitor as pictured here during a tournament match on Saturday at the Pearl City High School Gymnasium. 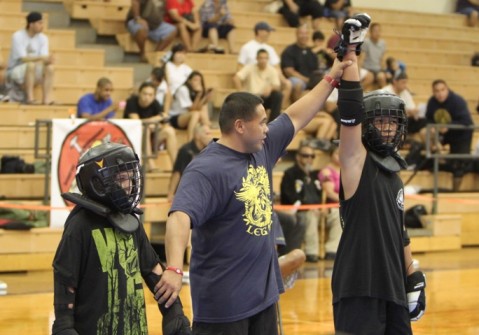 A proud moment for an Eskrimador in the Youth Division! 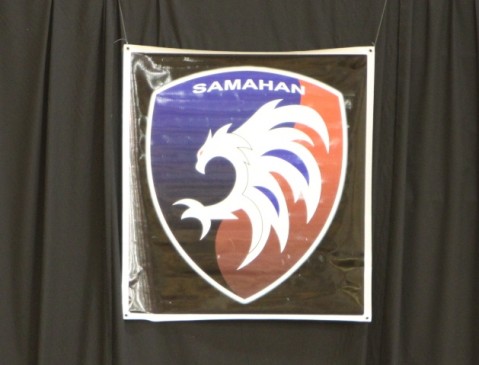 The Samahan Crest represents the Philippine Eagle also known as Haribon or Haring Ibon – King of the Birds.