The CTAP area project is led by State Representative K. Mark Takai and community residents in collaboration with the Honolulu Police Department.

"After six very successful CTAP events at this same location in 2010 and 2011 in response to a fatal accident took the life of a pedestrian in the crosswalk on Kaahele Street on October 12, 2009, the community expressed the need for a seventh event to reinforce the message to tell drivers to slow down," said Takai.

CTAP volunteers and HPD Officers lined Kaahele Street near the Newtown Recreation Center on Tuesday from 4:00pm – 5:00pm holding signs that reminded motorists to slow down and drive safely.

HPD issued several tickets to motorists for excessive speeding above the posted 25 MPH limit on Kaahele Street during the 60 minute CTAP event.

If you would like to become a CTAP community volunteer contact Rep. K. Mark by e-mail at: reptakai@capitol.hawaii.gov. 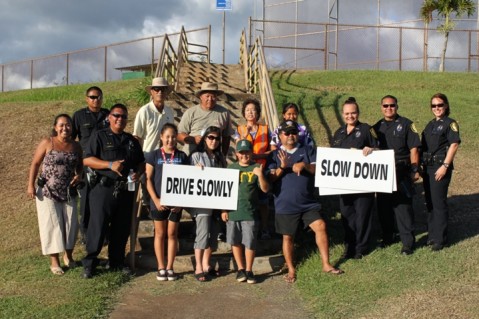 CTAP volunteers and HPD pictured on Tuesday, September 27, 2011 on Kaahele Street near the Newtown Recreation Center in Aiea.