Chargers and Marauders to meet in undefeated showdown

The Pearl City Chargers (5-0) and Waipahu Marauders (5-0) are all set for this Saturday’s OIA White Division showdown between two football teams that will be playing for a chance to remain unbeaten and improve to 6-0 in league play. Most importantly the winner will claim victory over their Westside rival.

All three league top contenders Kaimuki, Waipahu and Pearl City will match up against one another in the next few weeks.

“This year playing the big boys at home is a huge difference,” said Chargers Head Coach Kai Kamaka. “Last year we were on the road against them."

Coach Kai Kamaka expressed the importance of the upcoming match up with the Marauders and the significance of playing the game with pride.

“This game is huge for us not only for our team in general, but for the community and just for the kids themselves to prove with all the adversity that they have been facing that they can be winners,” Kamaka said.

Adversity entered into the winning equation in the form one game player suspensions that were a result of personal foul penalties that piled up against the Chargers in their 35-29 win against the Kalani Falcons at Kaiser High School on September 17.

The following week, the Chargers came out with a renewed attitude that all but eliminated game penalties in their 34-6 win against the Waialua Bulldogs at home.

“I see a more of a tighter niche that came off of the Kalani situation with the team,” Kamaka said. “They have more accountability to each other now. You can sense it. Even the way they perform the school alma mater. It’s more with the pride that they hold inside. I think the turning point was that game where they knew that that was the time that they had to come together and support each other through a tough time.”

The Chargers know that they will be tested against a physical Waipahu Marauders squad on Saturday.

“Our character is going to be our biggest test,” Kamaka said. “Waipahu is going to be physical. They’re going to be scrappy. We’re just as physical and scrappy as them but we have to be more level headed and make good plays and just get back to the huddle and get ready for the next play.”

The Chargers are planning to take advantage of their speed and quickness to run down the physical play and size of their Waipahu Marauder opponent.

“Waipahu is more of a physical power team,” Kamaka said. “We’re physical and we’re fast so we have to have play them on the edges and have those big guys running side to side and let the conditioning start to wear their size down.”

Chargers Junior QB Kaimi Paredes has the offense humming with his accurate arm and talented group of receivers. Coach Kamaka is counting on the Chargers firepower to attack the Marauders defense through the air.

“We’re going to throw the ball short and let our guys make plays and space,” commented Kamaka on his excellent core of receivers. “We have a host of guys. That’s what’s making it hard on them. They cannot just key on one guy. In the last couple of games I think 10 different guys touched the ball and all of them scored. Also on offense it’s just creating the mismatches and isolations is what’s going to pull us through this game.”

Paredes has taken control of the Chargers offense after being named the starting QB coming out of summer training camp. He is the #1 ranked QB in the OIA White Division with 1010 passing yards and 15 touchdowns.

“Kaimi has grown instantly,” Kamaka said. “He’s matured 10 times over in a few weeks. Especially in our offense where it’s a true read offense. It can be detrimental if done wrong but can be fun if done right. He’s using his feet to create openings to throw the ball which is good and he’s moving a lot of the coverage with his eyes.”

On the defensive side of the ball, the Chargers play a tough, swarming, smart style of football. They are aggressive and hard hitting from the opening whistle to last tick on the game clock. Improvement in the areas of leadership, attitude and commitment has manifested itself in the last couple of weeks, leading to controlled, hard hitting, all star level performances.

This Saturday, Coach Kamaka will be going up against his alma mater and familiar faces as he looks across the field to his opponents sideline.

“The Waipahu Head Coach Eric Keola was the DB coach when I played,” Kamaka said. “Coach Villanueva was also my DB coach and now he’s the offensive coordinator over there. We have real good relationships with them.”

The Chargers are ready for the Marauders after a good week of practice for the biggest game of the regular season so far.

“We had a real good detailed week on scheme and formation and recognizing where their athletes are and which are the playmakers that we have to be knowledgeable to know where they are on the field and where we need to be,” Kamaka said. 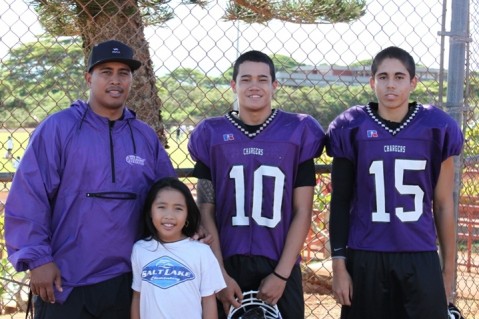 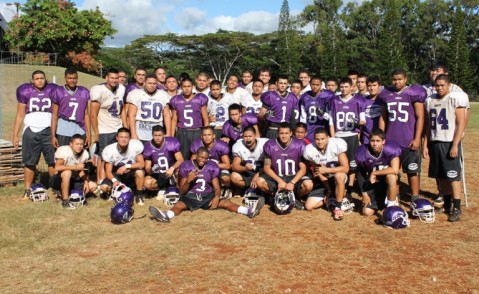 Pearl City Chargers Varsity Football Team pictured at practice on Thursday, September 29, 2011 as they prepare for their game against the Waipahu Marauders.