The Pearl City Chargers (7-0) varsity football team is one game away from completing an undefeated OIA White Division regular season after defeating the visiting Kalaheo Mustangs (2-5), 43-21 on Friday.

The Chargers will have to get past the Kaimuki Bulldogs next Saturday, October 10 at home to make an undefeated regular season a reality. Kaimuki takes their regular season 6-0 record up against the Waipahu Marauders (5-1) tonight at Waipahu.

On Friday, the Kalaheo Mustangs entered Edwin "Bino" Neves Stadium ready to play and the Chargers were ready to oblige. If you looked at their league records, you would have come to the conclusion that the two teams were headed in different directions. But, after three quarters of play, the Chargers found themselves in a battle with an opponent who wanted to win.

"We came out a little sluggish and a little off on our reads,"  said Pearl City Chargers Head Coach Kai Kamaka. "They did some good stuff mixing up the backside blitz and moving the front guys around. Once we buckled down and talked it up, the second half we fixed it up. But they did some good stuff confusing our guys upfront."

In the fourth quarter the Chargers turned up the heat, wearing down and outscoring the Mustangs 21-6.

Kalaheo got on the scoreboard in the second quarter on a 45 yard touchdown pass from QB Rashaan Matalolo to Nainoa Frank with 9:35 on the clock. Two point conversion attempt good. Kalaheo led 8-0.

Pearl City tied the game with 53 seconds left in the second quarter on a 28 yard touchdown pass from QB Kaimi Paredes to Daicorri Briscoe and a two point conversion pass from Paredes to Briscoe.

The Chargers got on the scoreboard again with 8.7 seconds left in the second quarter on a 55 yard punt return for a touchdown by Briscoe. Two point conversion attempt failed. Pearl City went into the halftime with a 14-8 lead over Kalaheo.

Kalaheo took back the lead at 6:42 in the third quarter on a 15 yard touchdown pass from Matalolo to Frank. Extra point attempt good. The Mustangs went out front of the Chargers 15-14.

The Chargers fought back and regained the lead at 1:30 in the third quarter on a 30 yard touchdown reception from Paredes to Briscoe. Two point conversion attempt from Paredes to Adrian Hall-Fonoimoana good. Pearl City led 22-15.

The Chargers struck again with 9:42 remaining in the fourth quarter on a 12 yard touchdown reception from Paredes to Briscoe. It was Briscoe's third touchdown reception of the ballgame to go along with his second quarter 55 yard punt return for a touchdown. The David Laranol extra point attempt was good. Pearl City led 29-15.

The Mustangs made it interesting with 8:09 on the clock in the fourth quarter scoring on a 45 yard touchdown run by Christian Johnston closing the deficit to 29-21. Extra point attempt failed.

Pearl City got the ball back after Chargers defensive back Tanner Tokunaga jumped on a Kalaheo fumble at the Mustangs 20 yard line with 4:16 remaining in the fourth quarter. A few plays later, Troy Barboza Scanlan powered his way into the end zone from the 2 yard line with 2:10 on the clock. Laranol extra point attempt good. Pearl City led 36-21.

The Chargers scored their final touchdown with 3.7 seconds on the game clock on a 40 yard interception return by Chargers linebacker Jayden Zaldo. Laranol extra point attempt good. Pearl City increased their lead to 43-21 as the game clock expired. 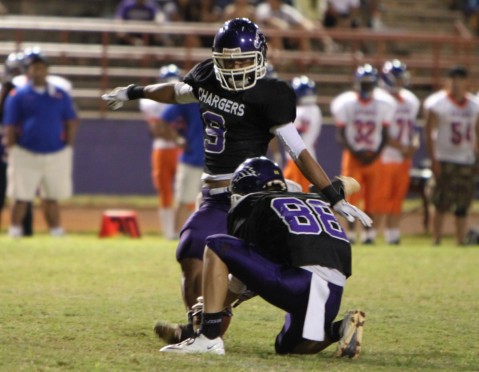