Mary Jo Brostrom and Allen Hoe attached their new Hawaii Gold Star Family license plates on their cars at a ceremony on October 10 at Kakaako Park in Honolulu.

The Brostrom and the Hoe families share a painful relationship. Both their sons –Jonathan Brostrom and Nainoa Hoe – were killed in the Middle East.

Army First Lieutenant Jonathan Brostrom, 24, was killed when his outpost was attacked by small-arms fire and rocket-propelled grenades from enemy forces in Wanat, Afghanistan in July 2008. Army First Lieutenant Nainoa Hoe, 27, lost his life on the battlefield in Mosul, Iraq in January 2005. The Army lieutenants were actually good friends, according to their parents.

“These new license plates honor fallen warriors and their families that are left behind,” said State Rep. K. Mark Takai (D-Aiea, Pearl City), who along with Allen Hoe and retired Army Colonel David Brostrom, worked together for more than a year to pass a law, which created the Gold Star Families license plates.

Once the license plates numbered GS001 were affixed to Mary Jo Brostrom’s vehicle, she was asked what’s most valuable. “Our new license plates,” she said, “because it’s a reminder that our sons paid the ultimate sacrifice so that the rest of us can enjoy living freely in this wonderful country of ours.”

“What it represents is that our family has lost someone very dear to us,” Allen Hoe added.

Takai, the coordinator of the Hawaii State Legislature’s Military Appreciation Package, said he was pleased be able to help families of fallen servicemembers obtain these special license plates.

“When I found out that Hawaii was one of the very few states without a gold star family license plate I knew we need to get this fixed, and fixed fast,” Takai said.

The Hawaii Gold Star Family license plates were created for the children, spouses, parents, grandparents, and siblings of fallen servicemembers. Currently, 49 states and Guam have Gold Star plates. “The Gold Star not only represents the selfless sacrifice made by the deceased, but was intended to give these families a measure of pride and consolation,” Takai said.

“These new Hawaii Gold Star Family license plates provide a unique chance for families and for the people of Hawaii to honor their sacrifice,” Takai added.

“As a Gold Star Father it is extremely important that we honor our fallen heroes in ways that will remind the American people of the sacrifices our military and their family members are making everyday to protect the freedoms we take for granted,” said Colonel Brostrom.

“Nainoa fully understood the risks, yet he chose to lead Warriors in combat, not as a political statement of any sort, but simply because his country had asked him to do so,” said his father Allen, who himself is a Combat Wounded Vietnam Veteran.

“Hawaii has several military-related and veteran-related license plates that honor the driver or the owner of the vehicles, but this Gold Star license plate recognizes the sacrifices of Hawaii’s Gold Star Families,” Takai said. “The visibility of these special plates on vehicles across the state will help remind us all that many of Hawaii’s sons and daughters have made the ultimate sacrifice.”

The gold star legacy is part of the traditions of our country that is traced back to World War I when Army Captain Robert Queissner of the 5th Ohio Infantry created the flags to honor his two sons serving on the front lines in 1917. The flags were quickly adopted by families with sons in the Army.

With President Woodrow Wilson’s support, the Council of National Defenses proposal permitting mothers who had lost a child serving in the war to wear a gold star on a black arm band while in mourning.

The black arm band was exchanged for a small flag and the gold star was outlined in a thin blue outline signifying that the servicemember had died in battle.

“The very essence of our freedom to live in a free society is the direct result of the bravery by those whose heroic acts and deeds this license plate honors,” Takai added.

“Besides the annual Hawaii Medal of Honor ceremony held at the State Capitol to honor fallen servicemen and servicewomen with Hawaii connections, these Hawaii Gold Star license plates provides the people of Hawaii the opportunity to honor these Heroes,” Takai said.

Takai acknowledged the assistance and support of Dennis Kamimura from the City and County of Honolulu. “Dennis Kamimura was instrumental in getting the Hawaii Gold Star Family license plate. He helped to coordinate this effort with all four county departments of motor vehicle and he presented crucial testimony before the Hawaii State Legislature,” Takai said. 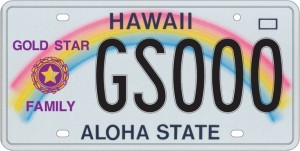 “These new license plates honor fallen Warriors and their families that are left behind.”

“What it represents is that our family has lost someone very dear to us.”

– Allen Hoe, father of 1st Lieutenant Nainoa Hoe, 27, lost his life on the battlefield in Mosul, Iraq in January 2005

“It is extremely important that we honor our fallen Heroes in ways that will remind the American people of the sacrifices our military and their family members are making everyday to protect the freedoms we take for granted.”

Gold Star Lapel Button for Next of Kin of Deceased Personnel

The Gold Star Lapel Button was established by an Act of Congress (Public Law 80-306) August 1, 1947, as amended by Act of Congress, section 1126, Title 10, United State Code (10 USC 1126) August 11, 1966, in order to provide an appropriate identification for widows, widowers, parents, and next of kin of members of the Armed Forces of the United States who lost their lives during the following periods –

5) While engaged in military operations involving conflict with an opposing force.

6) While serving with friendly foreign forces engaged in an armed conflict in which the United States is not a belligerent party against an opposing armed force.

Provide the following documents to the county’s Department of Motor Vehicle (On Oahu, you can submit your information to any Satellite City Hall):

* If immediate family member is not listed in Block #7 of DD Form 1300: (a)documentation (birth certificate, etc.) indicating next of kin qualification (mother,    father, stepmother/father, mother/father through adoption, foster parents who stood in loco parentis, children, brother, sister, half brother/sister, stepchildren, children    through adoption, grandmother/father; OR (b) letter from the Casualty Affairs Center, State Office of Veteran Services, or Veterans Administration, or Department of the Army, Navy, Marine Corps, or Air Force indicating that the applicant is eligible to receive the Gold Star Lapel button.

* Submit payment for the license plate and emblem replacement. Cost of this replacement is determined by your County of residence. (For the City and County of Honolulu, cost is $5.50.)

Families who qualify for the Hawaii Gold Star Family license plates may contact Rep. K. Mark Takai for assistance. Takai can be contacted at 808-586-8455 or at reptakai@capitol.hawaii.gov.