On Thursday against East #1 seed Castle, not only did Lindsey-Rapoza lead her Lady Chargers with a stellar performance on the mound, she also scored the winning run on a RBI single by Makana Kekaulike in the top of the first inning.

Both starting pitchers held each other scoreless the rest of the ball game.

First pitch for Saturday's OIA championship is set for 3:00pm. In two previous games played during the regular season, the Lady Trojans swept the Lady Chargers 8-6, 5-3. 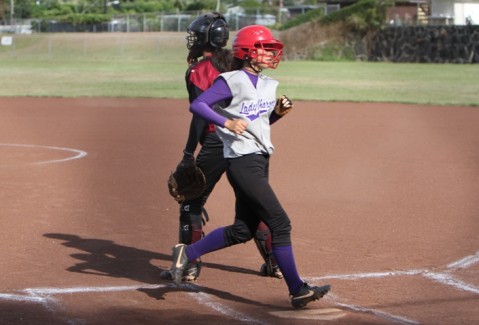 Anuhea Lindsey-Rapoza steps on home plate scoring the games only run on an RBI single by Makana Kekaulike in the top of the first inning against Castle.