With the win, White # 1 Pearl City (9-0) advanced to the OIA White Division Championship against White #3 Waipahu (7-2). Waipahu defeated White #2 Kaimuki (7-2) 36-22 in the the other semifinal match up last night at Kaiser High School.

The championship game is schedule for Friday, November 4 at Aloha Stadium. Kick off is set for 5:00pm. The OIA Red Division Championship will follow at 8:00pm.

Paredes had another hot hand for the Chargers completing 15 of 26 passes for 207 yards and three touchdowns. The Pearl City junior QB is the top rated passer in Division 2 football passing for 1831 yards and 25 touchdowns.

One the receiving end, Pearl City wide receiver Kelson Laboy caught 3 passes for 70 yards and two touchdowns with one of his touchdown catches coming off a 48 yard reception from Paredes in the fourth quarter that increased the Chargers lead over the Tigers to 26-12.

Rakeel McMillian picked up 51 yards on 11 carries with one touchdown for the Chargers.

The Chargers put 6 points on the scoreboard to take an early lead on a 14 yard touchdown pass from Paredes to Kelson Laboy with 5:10 remaining in the first quarter. Extra point attempt went wide left.

Kaimuki tied the score on an 18 yard touchdown pass from Alex Ironside to Fia Duarte at 6:54 of the second quarter. Extra point attempt failed.

On the kick off Kelson Laboy returned the kick 50 yards to McKinley's 16 yard line. On second down the Chargers were called for a penalty that put the ball on the McKinley's 24 yard line. On third down Paredes hit #88 Keanu Harris on a 24 yard touchdown pass with 5:56 remaining in the second quarter. Extra point attempt was good. Pearl City took a 13-6 lead.

In the third quarter, Pearl City scored again on a 31 yard touchdown run by Rakeel McMillian with 9:10 on the clock. Extra point attempt was good. The Chargers extended their lead to 20-6.

McKinley came back with 3:27 left in the third quarter scoring on a 15 yard touchdown run by #2 Fia Duarte. The Tigers attempted a two point conversion that failed. McKinley cut into Pearl City's lead 20-12.

McKinley had an opportunity to score and possibly tie the ball game late in the fourth quarter with 4:17 on the clock after a Pearl City fumble was recovered by the Tigers on the Chargers 10 yard line. McKinley was pushed backwards after a penalty and would proceed to turn the ball over on an interception by #45 Jayden Zadlo that was returned to the 40 yard line. The Chargers would eventullay capitalize on the turnover, putting the game away on a 48 yard touchdown pass from Paredes to Laboy with 2:34 left in the fourth period. The extra point attempt failed. Pearl City increased their lead over McKinley to 26-12.

The Chargers would get the ball back and were able to run out the clock for the win. 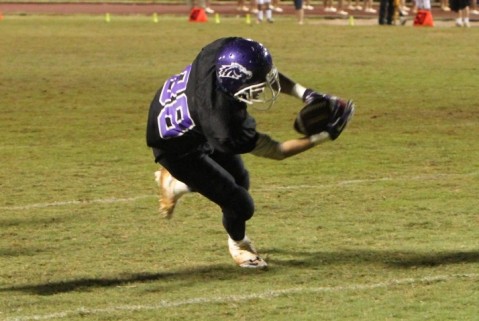 Pearl City wide receiver #88 Keanu Harris dives into the end zone and scores on a 24 yard touchdown pass from Kaimi Paredes that gave the Chargers the lead at 12-6 in the second quarter.

The McKinley Tigers had their hands full covering the speedy Pearl City receivers but played them tough pictured here gang tackling #3 Daicorri Briscoe after a catch. 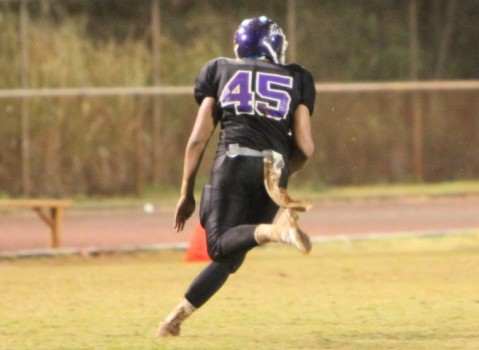 Pearl City linebacker #45 Jayden Zadlo pictured on the run after picking off an Alex Ironside pass late in the fourth quarter that put the Chargers in scoring position.

Congratulations to the JV Chargers for their victory and perfect record at 7-0 heading into the championship! 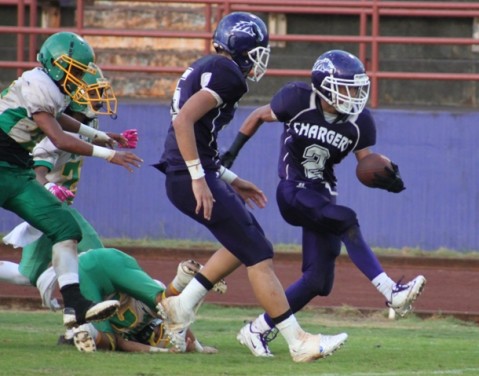 Pearl City's Tristin Kamaka scores on a 23 yard touchdown run at 3:17 of the first quarter in the Chargers OIA Junior Varsity Semifinal Playoff win over Kaimuki.