Tough defense controlled the game on both sides similar to their first meeting won by the Chargers 13-8 on October 1.

Both teams were held well under their regular season numbers on the ground.

Chargers wide receiver Shawn Lopez halled in 4 receptions for 124 yards and one touchdown.

Waipahu's Beaver Lagima Jr. picked off a Paredes pass on Waipahu's 47 yard line at 10:54 of the first quarter that would lead to a 31 yard field goal by Marauder kicker Jayson Gonsalves with 8:39 remaining in the quarter. Lagima recorded to picks on the night.

Marauder defensive lineman Travis Teofilo jumped on a Chargers fumble late in the first quarter on the Pearl City 27 yard line that led to a Waipahu touchdown on a one yard run by Wesley Nagaseu with at 10:33 of the second quarter. The extra point attempt hit the left side upright bouncing back into the field of play. Waipahu took a 9-0 over Pearl City.

Waipahu had another opportunity to score in the fourth quarter after an interception by Nagaseu that put the Marauders on the Pearl City 15 yard line. A personal foul penalty on the play backed the the Marauders up another 15 yards. The Chargers held the Marauders stopping them on fourth down from the 29 yard line.

Pearl City started to get their offense going in fourth quarter but turned the ball over near the Marauder 20 yard line on an interception by #36 Joseph Kahele Ayau with 9:33 remaining in the quarter.

The Chargers scored their only touchdown on a hook and ladder play that went from Paredes to Daicorri Briscoe to Shawn Lopez who ran it in for a 56 yard Pearl City touchdown with 2:21 left in the fourth quarter. Pearl City kicker David Laranol converted the extra point attempt to pull the Chargers within two points at 9-7.

Pearl City got the ball back with 16 seconds remaining in the fourth quarter. The Chargers moved the ball to their own 42 yard line after a Paredes 28 yard run with 8 seconds remaining on the game clock and no time outs. Paredes threw an incomplete pass to Daicorri Briscoe leaving 3 seconds on the clock. The Chargers pulled off another hook and ladder play wiith Briscoe handing off to Lopez who ran it to the Marauders 12 yard line before being stopped with no time left on the clock to end the game. 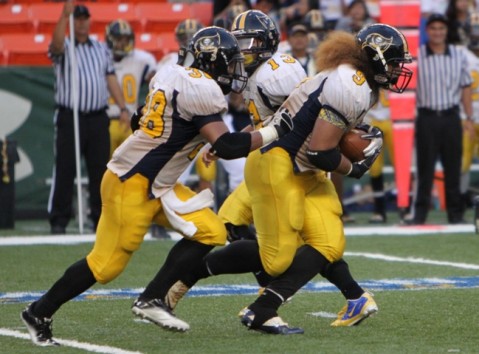 Waipahu's #9 Wesley Nagaseu played a big role on both offense and defense for the Marauders scoring a touchdown and with one interception against the Chargers. 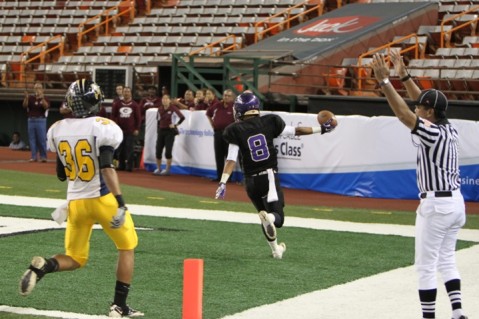 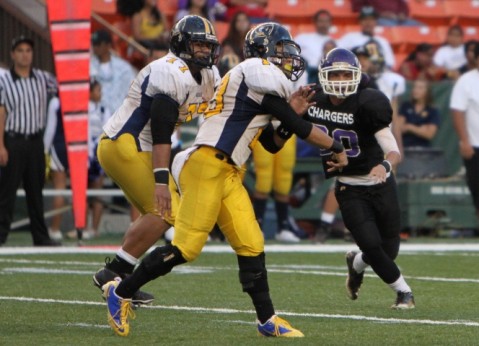 Waipahu's Drake Yoshioka attempts a pass against the Pearl City secondary. Yoshioka passed for 104 yards in the championship.