There was no doubt in the minds and hearts of the Pearl City junior varsity football team of the outcome as they took to the field yesterday afternoon to face the Waipahu Marauders in the Oahu Interscholastic Association White Division Junior Varsity Championship game at Edwin "Bino" Neves Stadium on the campus of Pearl City High School.

The Chargers had a big challenge ahead of them to win the school's first OIA football title and first perfect season. They won the challenge defeating the Marauders in a runaway, 43-18. It was the second victory over Waipahu this season. The Chargers had pretty much the same result as the first matchup beating the Marauders 36-0 at home on October 1.

Chargers Head Coach, Guy Paredes is a 1985 graduate of Pearl City High School and wears the Charger Pride inside and out. He has reached the pinnacle of  success early on at the helm of the Chargers junior varsity football program with Saturday's championship win. He is as humble as his inspiring team and coaching staff and gives thanks for all the support this season.

"This is  very emotional," said Paredes. "Being that this is my alma mater it's a very emotional moment. It's all about the boys. The boy's played their hearts out all season and the glory goes out for them."

"I would really like to say mahalo to the community, the parents, our coaches of course, the staff and the school itself. Without everybody's support this wouldn't happen. I would also like to thank Coach Kai for giving me the opportunity to take the JV team," added Paredes.

Pearl City varsity football head coach, Kai Kamaka was on the sidelines yesterday afternoon and liked what he saw. Coach Kamaka will be bringing a number of players from the junior varsity squad to join the varsity as they head off to Kauai for the first round of the HHSAA Division II Varsity Football Championships. Kamaka coached a lot of the junior varsity squad a few years ago while he was the head coach for the Highlands Colts Pop Warner program that won a state title under his leadership.

"This is a big boost for our program," said Kamaka. "It's a tribute to our kids too for actually buying into what we're doing here. The JV staff and kids did a great job. They've been in the system for five to six years now. It's time to get a lot sharper. We will be bringing about fourteen of them up for state's and they'll contribute. They're going to be good.

The Chargers varsity team suffered a heartbreaking loss to Waipahu on Friday, 9-7 in the OIA White Division Varsity Football Championship game. The Chargers also entered the game undefeated at 9-0. They qualified for state's with their runner up finish.They will play the winner of Kapaa and Waimea on Saturday, November 12 at Vidinha Stadium on Kauai. Kapaa and Waimea will play on Monday, November 7 at 3:00pm to to determine who will face Pearl City in the first round.

In yesterday's championship victory, the Chargers got things rolling scoring in the first quarter on a one yard QB sneak by #9 Joe Travis with 6:36 on the clock. Extra point attempt failed.

Waipahu came back and scored on a four yard run on fourth down to tie the score at 6-6 with remaining in the second quarter. The two point conversion attempt failed.

After a Pearl City recovered a fumble recovery that put Chargers on Waipahu's 34 yard line, Pearl City QB Joe Travis scored on a 25 yard touchdown run to put the Chargers up 12-6 with 5:37 remaining in the second quarter. The Chargers were successful on a two point conversion attempt from Travis to #4 Kristian Vaana-Kikuyama to increase the Chargers lead to 14-6 over the Marauders.

On the Marauders next possession, Pearl City's Tristin Kamaka intercepted a pass from Waipahu QB M. Aiona to run out the clock. Pearl City went into the half leading Waipahu 22-6.

Pearl City came back and scored on tree yard touchdown pass from Travis to Matagiese with a 3.4 seconds on the clock in the third quarter. The touchdown was set up by a 46 yard pass reception from Travis to Kamaka. Extra point attempt was good. Pearl City went up 35-6 over Waipahu.

Waipahu scored on a QB sneak on third and goal with 5:37 seconds in the fourth quarter. Extra point attempt failed. Pearl City led 35-12.

The most exciting play and touchdown of the game came as Waipahu, while attempting an onside kick, kicked the ball into the hands of big #77 Kendrick "Baba" Nunes who caught the ball and blasted his way through Marauder defenders for a 40 yard touchdown. Pearl City converted a two point conversion to increase their lead to 43-12.

Waipahu scored the games final touchdown on a five yard QB run with 1:31 to go in the fourth quarter.

Congratulations to the Waipahu Marauders for their efforts in the championship game! 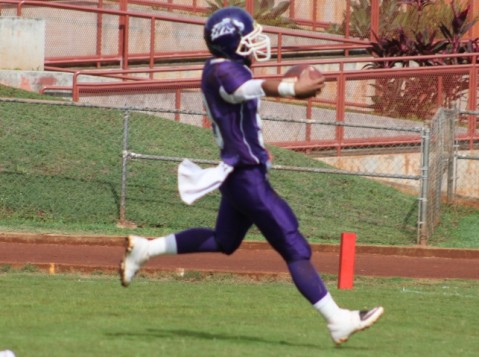 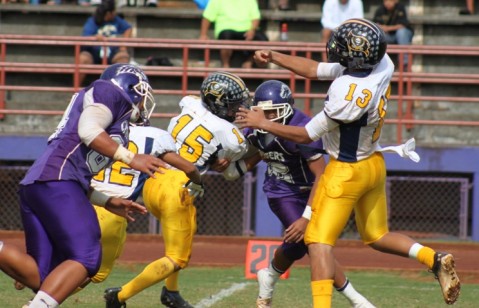 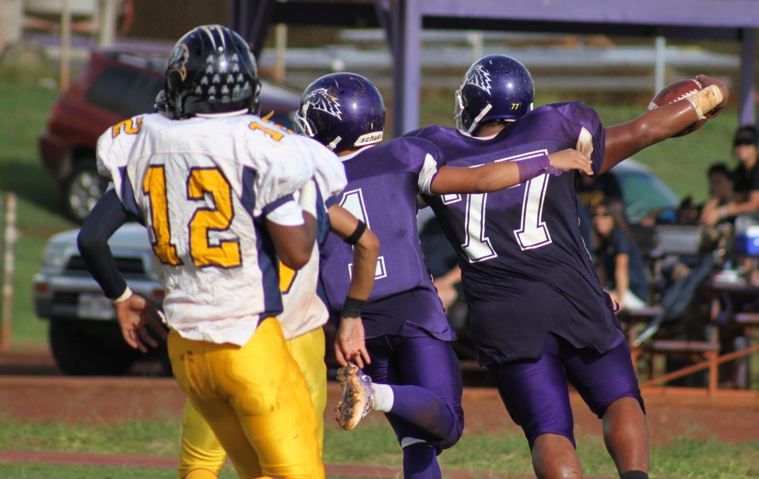 Pearl City's #77 Kendrick "Baba" Nunes" pictured scoring on a 40 yard touchdown after picking up a Waipahu onside kick in the fourth quarter. 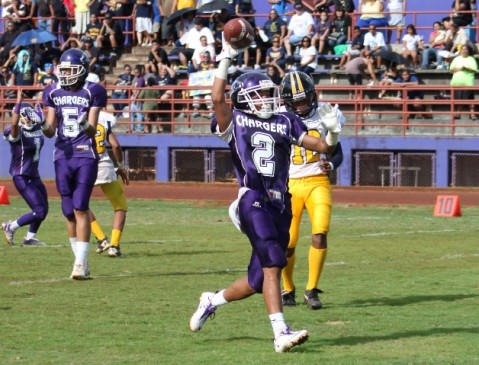 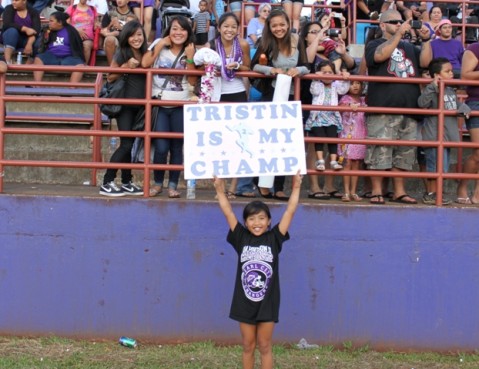 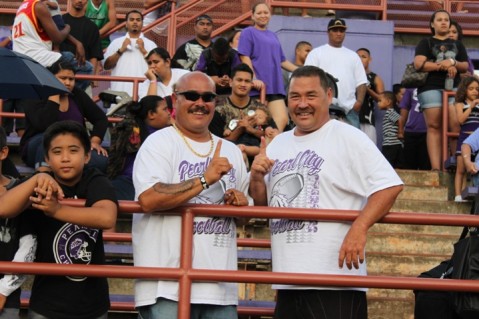 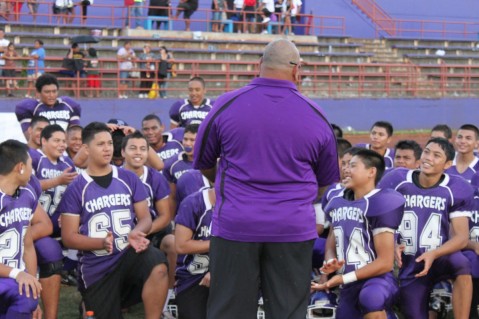 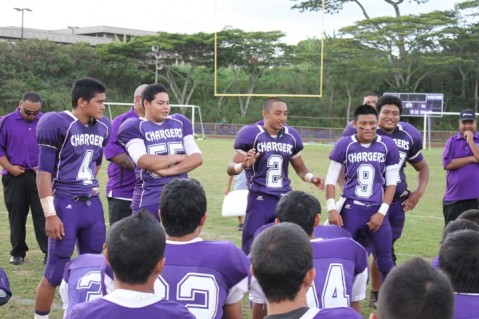 Pearl City Chargers Varsity Head Coach, Kai Kamaka also pictured congratulating the newly crowned champions and welcomes the players that will be moving up to the varsity for the state tournament. 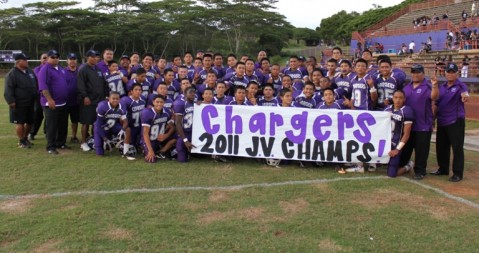 Congratulations to the Champions!