OIA White Division runner up, Pearl City (9-2 overall) will open the first round of the HHSAA Division 2 State Football Championship Tournament on the road Saturday against Kauai Interscholastic Federation champion Kapaa (7-3 overall). Kick off is set for 4:30pm at Vidinha Stadium in Lihue.

Pearl City starting QB Kaimi Paredes will lead the high powered Chargers offensive attack against a Kapaa defense that has kept their KIF opponents to 16.8 points per game. The Chargers have a scoring average of 26.5 points per game while allowing 18.5 points on defense.

Paredes is currently the #2 ranked passer in Division 2 throwing for 2048 yards and 26 touchdowns.

Kapaa starting QB John Das will lead the Warriors against Pearl City and will be looking to connect with his top receivers, Kaikea Sonoda (13-214, 1 TD) and Bronson Aiwohi (12-196, 1 TD). Sendreck D'Sio has been the workhorse on the ground for the Warriors rushing for 570 yards on 90 carries with 3 touchdowns.

The Chargers enter Saturday's first round contest against Kapaa coming off a close 9-7 loss to Waipahu in the OIA White Division Football Championship game.

On Monday, November 7 at Vidinha Stadium, Kapaa captured their first KIF Football Championship in 27 years defeating Waimea 17-14 on a 27 yard field goal by kicker Jonathan Paleka with 9 seconds left on the clock.

The winner of the Pearl City vs. Kapaa matchup will face top seeded Iolani (6-4) in the semifinals on Saturday, November 19 at Iolani with kick off scheduled for 2:00pm.

In other first round action, Konawaena (11-1) representing the BIIF will travel to play Lahainaluna (6-4) from the MIL on Saturday, November 12 at Maui's War Memorial Stadium. Kick off is set for 7:00pm. The winner will take on OIA White Division Champion and #2 seed Waipahu (8-3) in a semifinal matchup on Friday, November 18 at Waipahu High School. Kick off is set for 7:00pm. 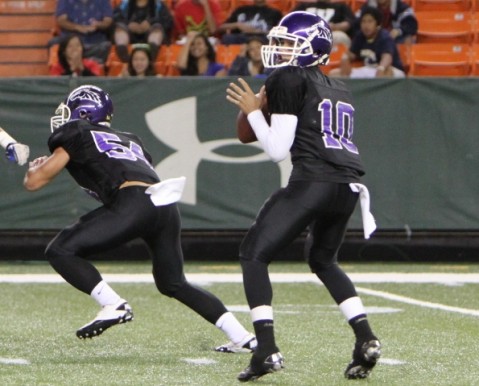 Pearl City QB Kaimi Paredes will lead the Chargers against the Kapaa Warriors in the first round of the HHSAA D2 State Football Championship on Saturday, November 12 at Vidinha Stadium on Kauai.