Dec. 7 survivors pass on stories of courage, survival and honor

As a kid growing up in Pearl City, my friends and I spent most of our free time either playing sports or hanging out along the Pearl Harbor shoreline. We would watch in amazement as the huge American Warships came in and out of Pearl Harbor.

As a military dependent and living in military housing, many of my friends had a connection to the Pearl Harbor Naval ship traffic as their father's were transported in and out of Pearl Harbor on deployment during the Vietnam War.

In 1970, as a 6th grader at Pearl City Elementary School, we watched from upper Pearl City as the movie Tora, Tora, Tora was being filmed. Replica Japanese Zero fighters filled the sky each day during the film production of the movie reenacting the December 7, 1941 attack on Pearl Harbor by the Japanese Navy.

When the movie opened in our local theaters in late 1970, my 6th grade class took a field trip to watch the movie in Waikiki. It was an overall amazing experience, from watching the filming over Pearl Harbor, to studying the attack on Pearl Harbor in our history class, and actually watching the movie with my classmates.

We were exciting to finally watch a scene in the movie that featured our Pearl City Elementary School Band Director, Mr. Norris who was leading the Navy Band on the deck of ship that was being attacked and bombed.

This past Wednesday, December 7th, 2011 I went to the Pearl Harbor Visitor Center to attend the 70th Anniversary of the attack on Pearl Harbor. My intentions were to pay my respects to those who had paid the ultimate sacrifice to our country and to spend some time with actual December 7, 1941 Pearl Harbor survivors to hear their stories.

As I was making my way around the Pearl Harbor Visitor Center, I came across a young man who was interviewing a Pearl Harbor survivor. With his pen and paper in hand, and looking like a seasoned journalist, 10 year old Jonathan (Jonny) Hoppe, a 4th grader at Geneva School in Manhattan (NYC), was jotting down notes while interviewing Pearl Harbor survivor Retired Navy Chief Richard Higgins who was stationed on Ford Island on the morning of the attack.

I asked and was granted permission from Jonathan and his father Ernest Hoppe to post the Chief Higgins interview transcript on MyPearlCity.com. 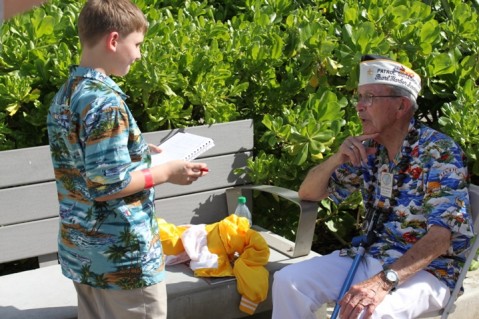 May I ask how old you are sir?

When did you join the US Navy?

What was your job in the Navy?

Radioman (2d Class by the time of the attack)

What were you doing at Pearl Harbor?

I was assigned to a PBY Squadron (VP-22) at the PBY hangers on Ford Island.

Where were you during the attack?

I was in my bunk in the barracks.

What did you do?

I jumped up and ran outside.

What did you think?

I knew it was an air raid!

What did you do after the attack?

We had to clean up all the debris. The squadron then deployed to the Dutch East Indies, was engaged in the Battle of Java Sea near Borneo (the story is told in the book "In the Hands of Fate"). We then transferred to Aleutians near Alaska to patrol for Japanese ships (having occupied Attu and Kiska Islands).

I was an instructor at the Ground School at Lake City Naval Air Station (60 Miles from Jacksonville FL.), where I met a Navy Nurse who soon after became my wife! 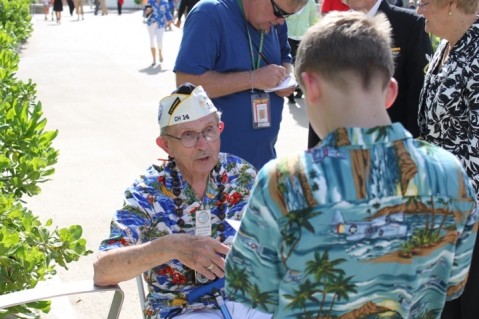 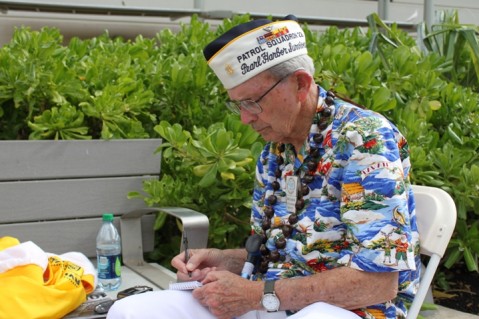 Thank you to Retired Chief Richard Higgins for sharing his story. Chief Higgins retired in 1959 after 20 years of active service and also from Inactive Ready (Retired) Reserves in 1971. Chief Higgins wife of 60 years passed away in 2004.

I would like to say thank you to all the World War II Veterans that I was able to meet and who shared their stories with me on Wednesday, December 7, 2011 at the Pearl Harbor Visitor Center during the 70th Anniversary of the attack on Pearl Harbor. 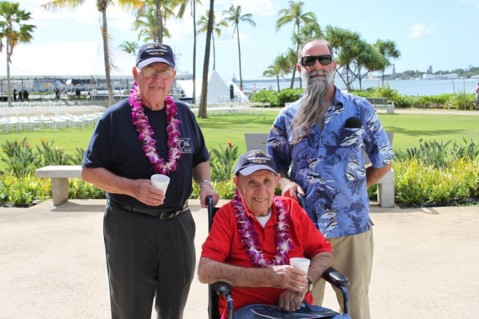 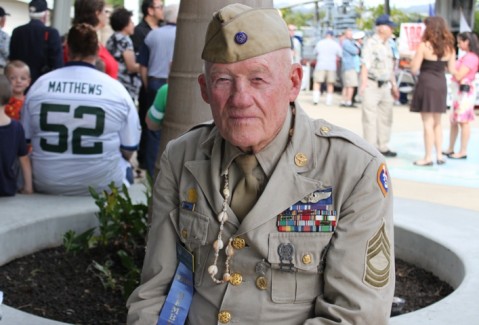 Wilbur Richardson was a B17 Ball Turret Gunner, 94th BG in the Europe during World War II. Richardson flew 30 missions in 79 days including 2 missions on D-Day.

Thank you to all our American veterans and current service men and women for your duty in keeping our country safe and protected from harm.

Thanks again to Jonathan and Ernest Hoppe. It was a pleasure meeting you both.

Mr. Hoppe is currently serving our country while stationed at Pearl Harbor as a Senior Medical Supervisor, JPAC Medical Detachment. 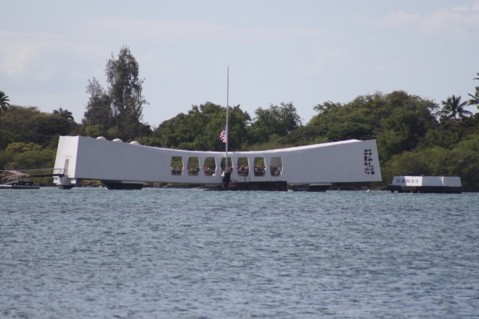 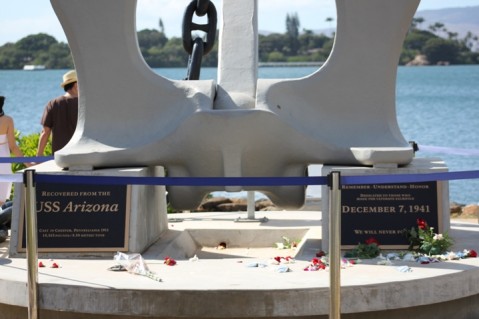