Mililani will meet Leilehua who is 7-1 on Wednesday at home. The Lady Trojans will need to beat Leilehua to finish undefeated and capture the regular season OIA Red West Title and secure the top seed in the division and a first round bye in the upcoming 12 team OIA Red Division Championships.

Leilehua plays Campbell on Monday in a must win for the Lady Mules. A win could possibly force a three way tie for first place if they defeat Mililani on Wednesday.

If the regular season ends in a three way tie between Mililani, Pearl City, and Leilehua, a coin flip will decide the order of seeding.

Leilehua's only loss of the regular season was to Pearl City, 44-35 at home on Thursday, January 5th.

Pearl City plays Aiea at home on Wednesday to end their regular season. The Lady Chargers need a win against the Lady Na Ali'i to secure at least the second seed in the division and a first round bye in the OIA Red Division tourney.

Saturday night's contest between Pearl City and Mililani was a relatively tight ball game up until the fourth period when the Lady Trojans went out to a 10 point lead by outscoring the Lady Chargers 17-7.

The first period ended knotted up at 10-10 on a bucket by Pearl City's Krystynn Naputi. In second period, Pearl City built up a 21-12 lead aided by a couple long range 3-pointers by Adrienne Jean Sylva and Sabrina Angle. Mililani fought back, going on a 10-2 run late in the second period that pulled the Lady Trojans within one point of the lead at 23-22 at the half.

In the third period, Mililani took the lead at 25-23 on a 3-pointer by #21 Taylor Babbitt to start the period. Kapili Amamalin added a bucket to put the Lady Trojans up 27-23. Pearl City's Tiari Walker hit a 3-pointer to pull the Lady Chargers within one point at 27-26. Kaylee Torres put Mililani up 29-26 with a basket on their next possession. Shawna Angle dropped two free throws to get back within one at 29-28. Sabrina Angle made one of two free throws with twenty seconds left in the period to tie the score at 29-29. Pearl City was called for a technical foul that sent Babbitt to the line for two shots with 18.9 seconds left in the period. Babbitt missed both shots. The two teams were all up tied at 29-29 at the end the third period.

Mililani took the lead at 31-29 to start the fourth period on a lay up by Babbitt. Amamalin scored a basket to increase Mililani's lead to 33-29. Sabrina Angle's second 3-pointer of the game with 5:47 on the clock pulled the Lady Chargers within one at 33-32. Mililani went out to 37-32 lead on a couple baskets by Babbitt and Amamalin with 4:10 remaining in the final period. Tiari Walker scored to close within three points at 37-34. Sylva converted two free throws with 1:56 remaining to get back to a one point ball game at 37-36. Mililani would spend the rest of the game at the foul line pulling out in front of the Lady Chargers 46-36.

Taylor Babbitt and Kapili Amamalin were top scorers for Mililani with 15 points each. Babbitt scored 3-3 pointers. 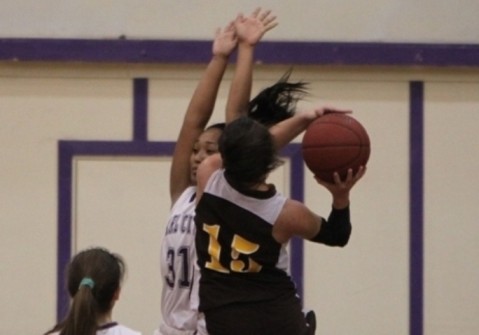 #15 Kapili Amamalin goes up for two of her 15 points. Pearl City's #31 Krystynn Naputi defends on the play. 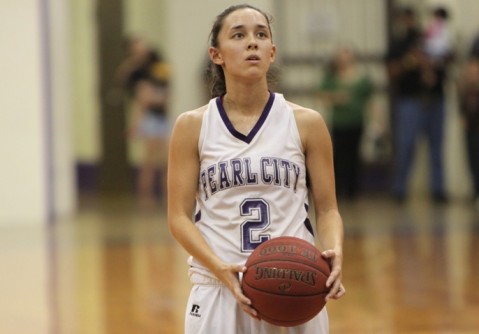 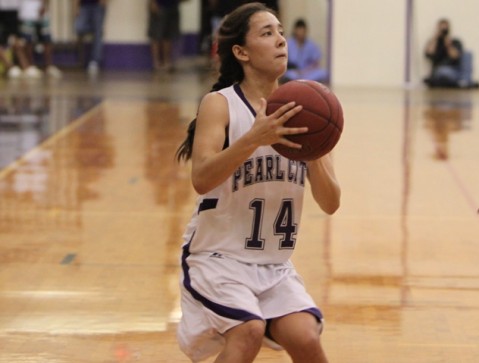 #14 Shawna Angle contributed 8 points in the loss to Mililani on Saturday, January 7, 2012.