Pearl City over Leilehua 4-1 in 8 innings

Pearl City and Leilehua were all tied up at 1-1 after seven complete innings when the Chargers put together a three run rally in the top of the eighth inning to take a 4-1 lead and pick up the win over the Mules.

Top of the 1st

In the top of the first inning Pearl City's Shaye Higa lead off with a single off of Leilehua starting pitcher Jordan Kameda. Pearl City's Jason Komoda entered the game as a courtesy runner for Higa at first base. Komoda stole second base. Komoda made it to third base on a bloop single to left field by Tyler Tashiro. Komoda scored the games first run on fly out to right field.

Bottom of the 6th

Leilehua tied the score in the bottom of the sixth inning on a bunt single off of Pearl City starting pitcher Tyler Kushima that scored  #7 Coryn Iwamasa from third base with one out. Pearl City turned a double play picking off runners at home plate and first base to end the inning.

Bottom of the 7th

Top of the 8th

In the top of the eight inning Pearl City's Sanyo Lo led off with a single to left field. Lo took second on a pass ball at home plate. #13 Dane Kaneshiro walked. The Chargers had runners on first and second. Leilehua made a pitching change  bringing in #7 Coryn Iwamasa in relief of Kameda. Next batter Matthew Tsutomi hit  a 2 RBI triple to deep left field driving in Lo from second and Kaneshiro from second. The Chargers take a 3-1 lead with no outs. Next batter Jake Bactista struck out for out number 1 in the inning. With one out #20 Tyler Kushima hit an RBI single driving in Tsutomi from third base. The Chargers took a 4-1 lead over the Mules. #5 Shayne Takamori stepped up and hit a single putting runners on pushing Kushima to second and Takamori on first. Kushima got thrown out at third base on a steal attempt from second. Next batter #15 Nicholas Au struck out for the third out of the inning.

In the bottom of the eight inning with bases loaded and one out Pearl City made a pitching change bringing in Sanyo Lo in relief of Tsutomi. Lo stuck out the next two batters to end the game and earn the save. 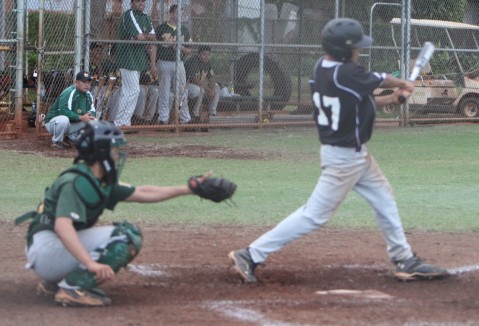 #17 Matthew Tsutomi pictured hitting a 2 RBI triple to deep left field to put the Chargers up 3-1 in the top of the 8th inning.