PCHS “Hearts for the Arts” benefit fundraiser concert this Saturday

The "Hearts for the Arts" benefit show is a benefit concert showcasing singing, dancing, and acting with all proceeds raised going towards funding this year’s local pidgin musical production of “Once Upon One Kapakahi Time” in late April 2012.

Tickets are $10 general admission, and they can be purchased at the door. 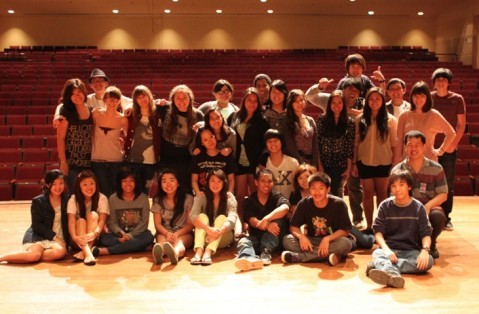 PCHS drama students performing in Saturday's "Hearts for the Arts"  benefit concert pictured on stage at the Pearl City Cultural Center during rehearsal on Friday, January 12, 2012.

PCHS Drama teacher, Mr. Steven H.Y. Kam recognized the need to raise funds to support the PCHS Drama programs yearly productions while directing the very successful production and presentation of Beauty and the Beast in 2010 at the Pearl City Cultural Center. At that time, the drama program was being effected by both furloughs and the recession. "Heart for the Arts" was created to keep the program alive financially. Saturday's benefit concert is the 5th “Hearts for the Arts".

PCHS seniors, Kaitlyn Iwashita and Kirstyn Trombetta, serve as this year’s Spring Concert student co-chairs for “Heart for the Arts" as well as student co-directors for both performances. Both Iwashita and Trombetta are experienced, seasoned actors and performers taking on lead roles for major productions as students in the PCHS Drama Arts Program. Their new roles as co-directors is a definite learning experience for the PCHS seniors but it's a role they are thoroughly enjoying and are truly appreciative for the opportunity.

"This is my first time directing," said Iwashita. "Sometimes it's a little overwhelming, but in the end it's definitely worth it because it takes a certain sort of responsibility that you don't get to experience as an actor or performer. It's nice to be a guiding light of sorts to the other performers."

"This is the first time I'm student directing just like Kaitlyn," said Trombetta. "It was a thrilling experience because it's like you’re in control of what numbers are in the show and what we can provide for the audience to see. At the same time it was frustrating because some people wouldn't cooperate but it came out pretty good in the end. It really pulled through. I really love this year and how it's going, not just this show but with “Once Upon One Kapakahi Time” as well."

Acting and performing is truly in their "hearts". They thrive, along with the rest of the PCHS drama arts students, to extend their passion to entertain from the stage to the hearts in audience with every performance.

"It's not just about myself," Iwashita said. "I enjoy performing but most of all I enjoy seeing the audiences reaction. If I can say that I've touched someone in the audience or maybe another performer, in some way I may have brightened their day or inspired them to perform themselves, then I know I've done a good job."

"It's seeing the audience’s reaction," Trombetta said. "It's not just you performing or singing or dancing or whatever you do? You're entertaining someone or a group of people and it really warms your heart inside as a performer. I love that feeling every time I'm on stage."

Mr. Kam has played an instrumental role in the development and success of hundred of students who have passed through and continue to come back as alumni to PCHS to help out and perform with the drama program. Iwashita, Trombetta, and the rest of the very talented group of PCHS drama students are current beneficiaries of his guidance and skill level in teaching them the craft of being proficient as an actor, performer or director.

"Mr. Kam is a very patient and understanding director," Iwashita said. "He's very, very patient. He has been guiding us, but at the same time he's given us a certain amount of freedom so we can learn from our own mistakes or experience things that he may not have suggested. That sort of freedom was a great learning experience for both of us."

"Mr. Kam, yes, he is very patient," Trombetta said. "Not just with us, but with everybody in the cast. He's really put a lot into this program even before we even entered high school. He's done a lot for the drama program at Pearl City High School. Especially with this show, he's really given us a lot of rope so we can direct. It's not just like we're labeled student directors." 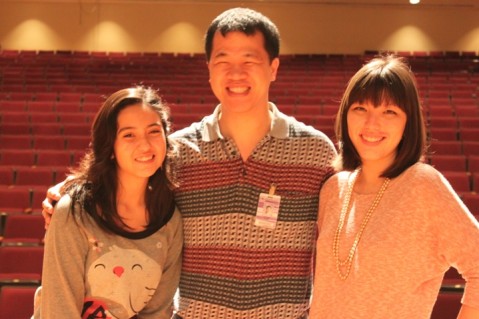 Hearts for the Arts cast pictured at rehearsal on Friday, January 12, 2012 at the Pearl City Cultural Center. 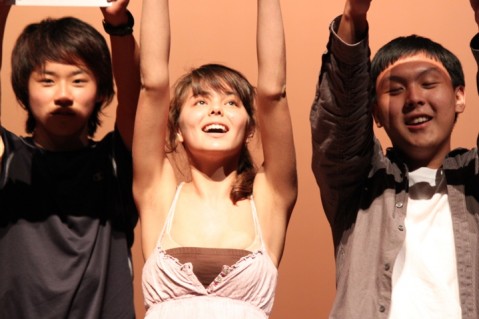 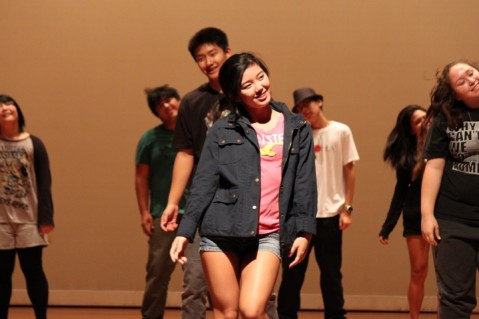 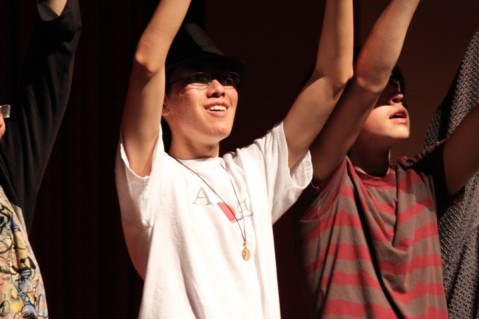