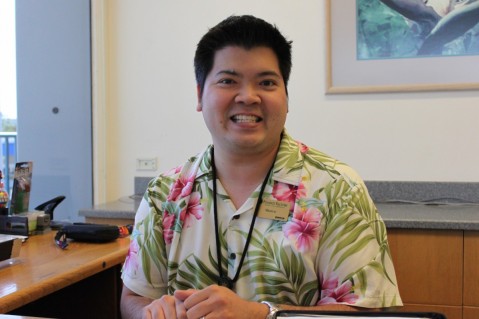 Mr. Taniguchi has been at the Pearl City Branch as the Operations Supervisor since mid 2008. He celebrated his 10th year anniversary with the company in 2011 and is looking forward to serving a busy and close knit Pearl City clientele base in 2012.

"This branch for us is one the busier branches," said Taniguchi. "I believe we have the most accounts among all of our branches at this location. It keeps us busy and our customer base is really nice. A few generations of families have come through as customers and it's neat to see the mom's bring their kids and they bring their kids," Taniguchi said with a smile.

"We've had more people walking in recently with the loan industry having really low rates right now, historically low," Taniguchi said. "People seem to think that it's a good time to get some money and do some stuff around the house or refinance their own mortgages."

Even with his busy schedule as Operations Supervisor, Taniguchi also serves as Treasurer for the Pearl City Shopping Center Merchants Association.

"I inherited it from the previous employees who worked at our branch here," Taniguchi said. "They were the treasurer's previously. It's been a good experience. I'm responsible for disbursing the funds when necessary and collecting the dues on an annual basis and such. I've gotten to visit some of the schools and meet a lot of the other tenants. Overall it’s been a good experience for me.

It's a role that has allowed Taniguchi to reach into the community to benefit our schools through donations from the Pearl City Shopping Center Merchants Association that contributes PCSC Gift Certificates in the amoiunt of $1000.00 to four Pearl City District Complex elementary schools on an annual basis. The donations rotate between eight elementary schools that make up the complex.

"I would like to say thank you to the community for supporting us through the years," Taniguchi said. "We've had locations at this shopping center up here on the second level and downstairs and the whole area has always been very good to the company. We're very grateful for the opportunity to serve them." 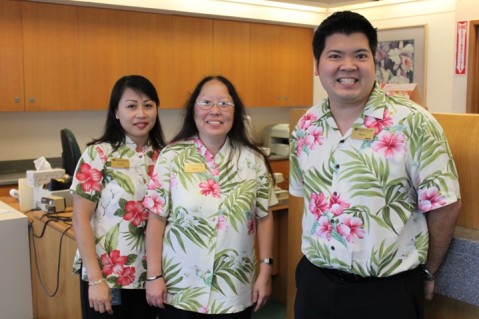 P.S. I have to say that the Finance Factors staff is terrific! Maribel Carvalho and Valarie Igawa always greet their customers with a smile. They also have great customer service skills. Before I could reach door at the end of my interview session, Valarie had all the neccessary information to open a new savings account as well as information on how to apply for a home improvement loan. Now that's customer service!