The Honolulu Rose Society hosted the grand opening of their new rose garden at the Urban Garden Center in Pearl City on Saturday, February 11, 2012.

After an early morning Hawaiian Blessing ceremony performed by Kahu Kanani Okuda, the rose garden was officially opened to the public. Honolulu Rose Society President Myrna Cariaga was all smiles to see the garden open for all rose lovers on Oahu to enjoy. Cariaga also expressed her gratitude to those who made the rose garden a reality and who will also be a part of future rose garden improvements and expansion."

"We want to thank the Pearlridge Rotary Club and the University of Hawaii Urban Garden Center for helping us develop the rose garden as you see it today in full bloom," said Cariaga. "This has been a labor of love going on two years. Since 2010 this has slowly been developed. This is one phase of many that will continue to develop here at the rose garden.” In the next phase at the entrance to the garden we hope to have series of pergolas or a series of trellises to exhibit climbing roses. We will also have things that maybe the seniors can do here too. it's going to be a multi-functional area with some benches and some clear open space to hold either workshops or weddings or whatever it would be.”

Bob Speer, past President of the Oahu Master Gardener Program explained how the rose garden came to be at the University of Hawaii's Urban Garden Center in Pearl City;

"This Urban Garden Center is 30 acres the University of Hawaii owns and we have been able to arrange a small section for a special rose garden which is the only rose garden on Oahu at this point and only one of two in all of the islands out here," said Speer. "We had the great fortune two years ago in late 2009 to meet with one of the leaders at the University of Hawaii, Ray Uchida and Honolulu Rose Society leaders and decided to make a rose garden at that point. The rose society folks in particular were really excited about it to have a place to display their love and affection for these beautiful roses."

The Honolulu Rose Society and Urban Garden Center received support from the Pearlridge Rotary Club who sent a group of volunteers to help out with the initial development of  the original rose beds which included digging out the rose bed plots, preparing the soil and planting over 120 rose plants.

"I had a chance to meet with the Pearlridge Rotary Club," Speer said. "Roy Matsuo, who was the president at the time, he and several of the leaders of the rotary club got excited about this as a project that could come to fruition in our own community here in the Pearl City area. Through a lot of planning, were able to put a lot of hard work into digging out five plots down here for roses. Today we're celebrating after a year in the ground these roses and how beautiful they are.

Plans to expand the rose garden will include continued financial support as well as volunteer labor support from the community to make the next phase as successful as phase one.

"Phase two is in the intermediate stages of planning and has conceptually been approved that will include a pergola and a concrete pad with significant size up here with some raised bed roses and some climbing roses and so forth,” Speer said. “We want to continue to make this one of those gardens when you come t it you say, "Wow", this is something else. So we're working on the "wow" part and making it a lot better. We should finish phase two within the next six or eight months, hopefully before the end of 2012."

"We would love to have support," Cariaga said. "It could either be in financial donations, monetary donations. It could also be in labor, also in materials we will need. Hopefully we will be able to contact a lot of the different other organizations to help out."

The Rose Garden at the Urban Garden Center is a gem. A world class garden of beauty for all visitors to enjoy and appreciate.

"At this point, I can say honestly, with the full backing of the University of Hawaii that this rose garden is the most well cared for, maintained, and vividly actively growing garden in this whole Urban Garden Center," Speer said. 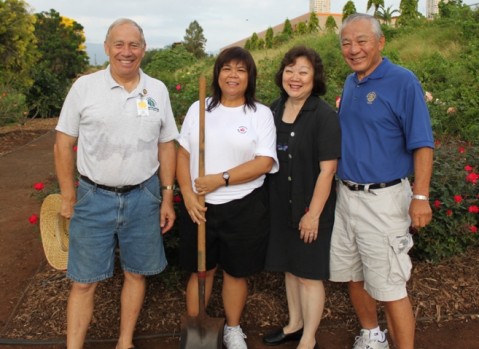 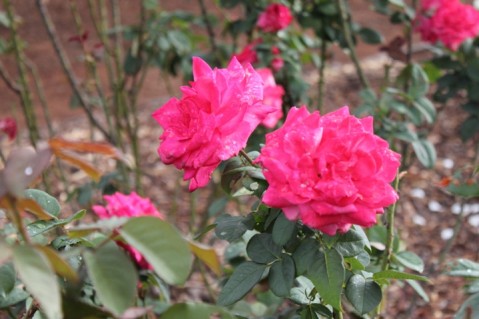