AOP powered past Pearl City 46-26 on Wednesday in the opening round of the HHSAA Boys Division I State Basketball Championship Tournament played at Radford High School's Alegre Gymnasium.

AOP front man Kamana Keohohou led the way for the Dolphins with a game high 14 points to lead all scorers. Pearl City's Marc Suniga led the Chargers with 8 points.

In the first half the Dolphins led the Chargers 10-7 after the first period. Pearl City  went ahead of AOP 13-12 in the second period on a basket by #5 Kainoa Perez  with 4:42 on the clock. AOP came back to tie the game at 13-13 on a free throw by #12 Arkadiy Mkrtychyan with 3:40 remaining in the period. Pearl City's Marc Suniga scored to put the Chargers up 15-13 and was fouled on the play. Suniga converted one free throw to increase the Chargers lead to 16-13.  AOP's Kamana Keohohou broke a 16-16 tie to put the Dolphins up 18-16. AOP went on to take a 24-18 lead at the half. That was about as close as Pearl City would get to AOP the rest of the game. ILH Runner-Up, AOP dominated Pearl City in the second half outscoring the Chargers 22-8. The Dolphins were impressive on both offense and defense and proved why they are a tough team to beat in the state tournament this year.

AOP moves on to the quarterfinals to face #3 seed KS-Hawaii (Big Island Champion) on Thursday (2/23) at 5:00pm at Radford High School's Alegre Gymnasium.

Pearl City dropped into the consolation bracket and will play KS-Kapalama on Thursday at 3:00pm. The defending state champion, KS-Kapalama suffered a 43-38 first round loss to King Kekaulike on Wednesday that spoiled the Warriors chances of a repeat. 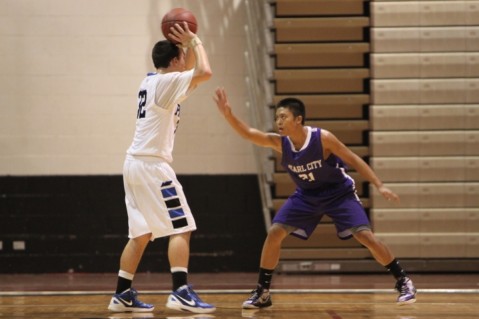