Pearl City's Kamalu Neal took care of business on the mound to lead the Chargers over Mililani 6-3 on Saturday in OIA Red West Division varsity baseball played on the hill at Pearl City High School. The Chargers stayed perfect at 4-0 while the Trojans dropped to 1-3 in league play. It was the second victory for the Chargers over the Trojans this week with the first win coming in a close 5-4 win on Thursday.

Neal earned the win allowing 3 runs and 6 hits in 6 complete innings. Mililani's Kanoa Hironaka took the loss allowing 4 runs in 3 2/3 innings of work. Hironaka was relieved by Javien Kahele in the top of the third inning with the bases loaded and two outs.

Pearl City's Tyler Tokunaga came in to close it out in the top of the seventh inning. Tokunaga ran into trouble in the inning with the bases loaded but got Brock Teixeira on strikes for the final out and the save.

Reid Akau led the Chargers at the plate hitting 2-3 with a single and a double. Jacob Mariano led the Trojans hitting 2-4 with two singles. 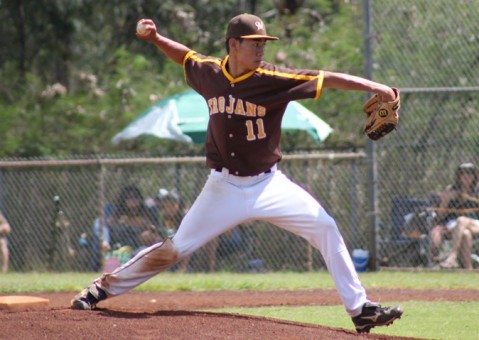 Mililani starting pitcher Kanoa Hironaka pictured on the mound for the Trojans against Pearl City. 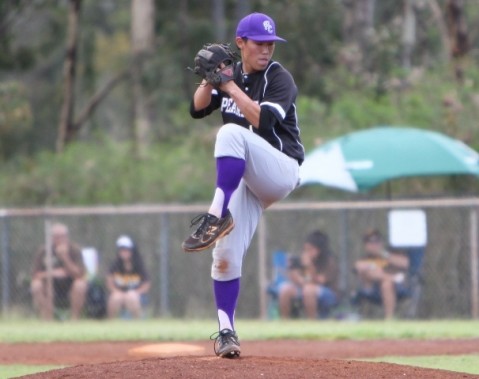 Tyler Tokunaga pictured in relief in the top of the seventh inning against Mililani. Tokunaga also went 1-3 at the plate with 1 RBI. 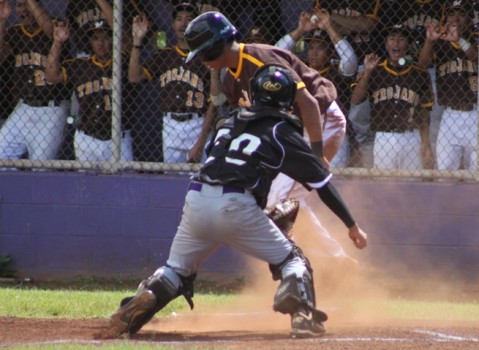 Mililani scores their second run in the first inning after a collision with Pearl City catcher Shaye Higa.

The Trojans scored three runs in the top of the first inning with starting pitcher Kanoa Hironaka helping out the cause from the plate as well with an RBI single off of Pearl City's Kamalu Neal that scored the Trojans second run of the inning. Mililani took an early 3-0 lead going into the bottom of the first inning.

The Chargers got on base in the bottom of the first inning on a lead off single by Tanner Tokunaga. Next batter Reid Akau popped out for the first out. Tanner advanced to second base on a pass ball at the plate. Tyler Tokunaga drove in Tanner from second base for the Chargers first run of the game on an RBI single to right field. A balk sent Tyler down to second base in scoring position. Mililani starting pitcher Kanoa Hironaka walked Kamalu Neal and Sean Milan in order to load the bases with one out. Brock Honda came in as a courtesy runner for Neal. Matt Tsutomi stepped up to the plate and hit a bloop RBI single to right field that scored Tyler Tokunaga from third base for the second run of the inning. The Chargers left the bases loaded to end the inning trailing the Trojans 3-2.

Matt Tsutomi got things going for the Chargers in the bottom of the third inning with a double down the left field line with two outs. Next batter Isaiah Aribal walked allowing Tsutomi to advance to third base on a pass ball at the plate on ball four. Shaye Higa walked to load the bases. Next batter Jason Komoda was hit by a pitch scoring Tsutomi from third base to tie the game at 3-3. Jordan Mendiola entered the game as a courtesy runner for Higa at second base. Next batter Tanner Tokunaga walked scoring Aribal from third that gave the Chargers the lead at 4-3. Mililani made a pitching change bringing in reliever Javien Kahele with the bases loaded and two outs. Pearl City scored another run to go up 5-3 on a pass ball at the plate that scored Mendiola from third. Next batter Akau walked to the load the bases. Tyler Tokunga flied out to end the inning with the bases loaded.

In the bottom the sixth inning the Chargers scored their final run of the ball game off of Mililani's Troy Kakugawa to put the Chargers in control at 6-3 on an RBI single by Sean Milan that brought home Reid Akau from third base. Kakugawa entered the game in bottom of the fourth inning in relief of Javien Kahele.

Mililani left the bases loaded in the top of the seventh inning after Chargers reliever Tyler Tokunaga struck out Mililani's Brock Teixeira for the final out of the ball game.

The Chargers return to action on the road against Waianae on Saturday, March 24th. First pitch is scheduled for 11:00am.