It was the regular season finale for both ball clubs. Pearl City finished the regular season at 7-5. The loss to Kapolei dropped the Chargers into a three way tie for first place with Waianae and Campbell in the OIA Red Western Division.

Kapolei finished the regular season at 4-8. The Hurricanes did not qualify for the upcoming OIA Red Division Championship Playoffs that begin on Wednesday, April 25, 2012. Location and game schedules to be announced.

In Saturday's win, Kamachi-Allen held Pearl City to two hits while striking out nine in going the distance.

Sumi Pruett took the loss for the Chargers in a complete game performance. Pruett allowed one run on three hits while striking out seven.

Kapolei manufactured the game winning run in the top of the second inning on an RBI sac fly to center field by Hurricanes catcher William Leskovec that scored Robbie Depp from third base. Depp got on base in the inning after hitting a ground rule double that jumped over the right field fence. Depp advanced to third on a pass ball at the plate.

Kamachi-Allen was working on a no-hitter into the bottom of the sixth inning when Pearl City's Kamalu Neal ripped a single to center field with one out. The Chargers fell short of mounting a rally in the inning leaving two runners on base after Tanner Tokunaga got picked off at second base. 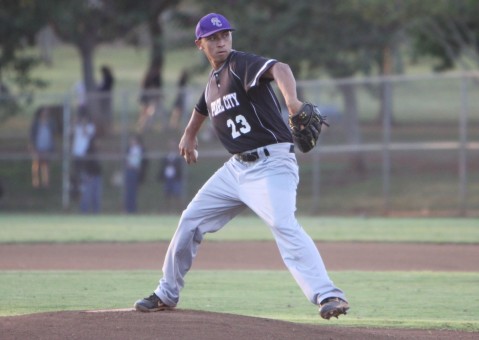 Pearl City's Sumi Pruett pitched a good game in the loss to Kapolei allowing only one run and three hits while striking out seven batters.