Moanalua will face Kailua for the championship today at Hans L' Orange Field. First pitch is scheduled for 5:30pm.

In last night's game, the tension was riding high, fueled by a bit of a growing rivalry that has been building between the two ball clubs the past few years. The Chargers and Na Menehune found themselves in another tight contest with both teams fighting to the last pitch for the win and a trip to the OIA championship game.

Pearl City had the chance to pull off another trademark Charger come from behind win in the bottom of the seventh inning but Na Menehune pitcher Austyn Nagamine caught Pearl City's Sumi Pruett looking with bases loaded and two outs to end the game.

Nagamine earned the win for the Na Menehune after coming into the game in the fourth inning in relief of starter Bryson Yasui. Sean Milan took the loss for the Chargers.

Lead off batter Kekoa Kaulukukui reached first base safely for the Na Menehune. Kaulukukui advanced to second base on a ground out by Elijah Monis. Next batter Austin Inabata was hit on the foot by Pearl City pitcher Sean Milan and took first base. Austin Nagamine hit an RBI single to right field that drove in Kaulukukui from second base. On the play, Monis advanced to third base. Next batter Bryson Yasui hit an RBI single that scored Monis from third. Kyle Aganos came into the game as a courtesy runner for Yasui at first base. Nagamine got thrown out at the plate attempting to score on a bunt by Jake Nakagawa. Nakagawa made it safely to first base. Next batter Tyler Fujimoto hit a two out single to left field that loaded the bases. Milan walked Nolan Kometani scoring  Aganos for the third run of the inning. Milan got Mark Kuga to flyout for the third out.

Matt Tsutomi led off the inning and reached first base safely after a routine pop up to right field was dropped by the right fielder. Isaiah Aribal came in as a courtesy runner for Tsutomi at first base. Next batter Noah Derby hit a double down the left field line moving Aribal from first to third. Moanalua made a pitching change bringing Austyn Nagamine in relief of Yasui. Aribal scored from third base on a wild throw to home plate. Tyler Tokunaga hit an infield single that scored Derby from third that tied the game at 3-3. Tyler Tokunaga reached second base on a pass ball at the plate. Reid Akau grounded out to second base moving Tokunaga to third base. Tanner Tokunaga grounded out stranding Tyler Tokunaga on third base to end the inning.

Kaulukukui led off the inning with a single that went past Tyler Tokunaga at shortstop and into centerfield. Kaulukukui stole second base. Next batter popped out to second for the second out. Austyn Inabata hit an RBI double to right field scoring Kaulukukui from second. The Na Menehune took a 4-3 lead. Pearl City made a pitching change bringing in Tyler Tokunaga from shortstop in relief of Akau. Tokunaga got Nagamine on strikes but a pass ball at the plate allowed Nagamine to reach first base safely. Inabata moved down to third. Kyle Aganos came in the the game as a courtesy runner for Nagamine. Tokunaga walked Bryson Yasui to load the bases. Tokunaga struck out Jake Nakagawa for the second out. Tyler Fujimoto popped out for the third out leaving the bases loaded. 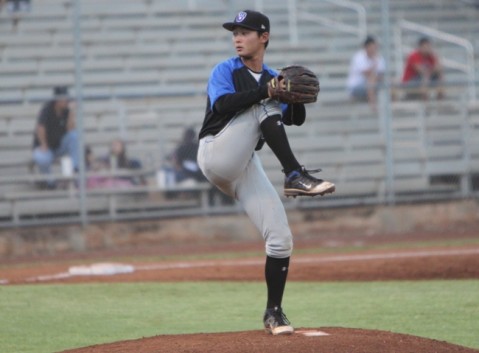 Moanalua's Bryson Yasui started the game on the mound for the Na Menehune. 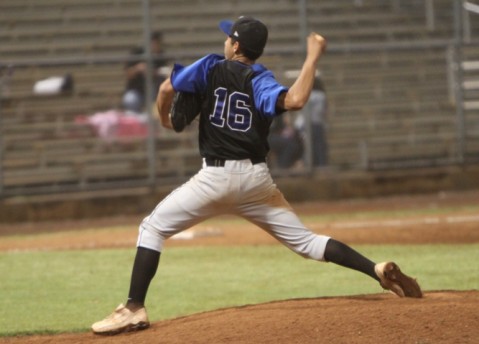 Austyn Nagamine came in relief of Yasui in the fourth inning and earned the victory. 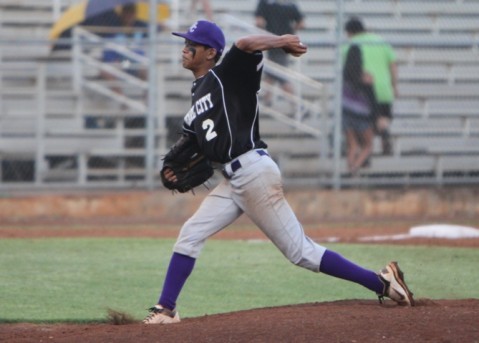 Sean Milan was the starting pitcher for the Chargers against Moanalua. 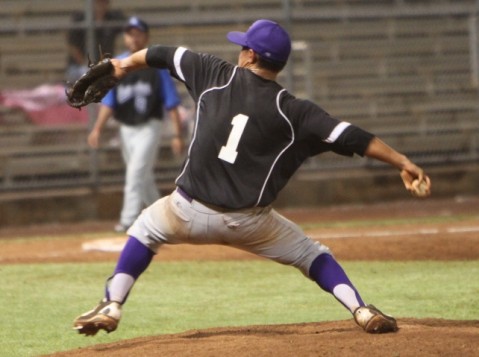 Tyler Tokunaga came in the game in relief of Reid Akau in the top of the sixth inning. 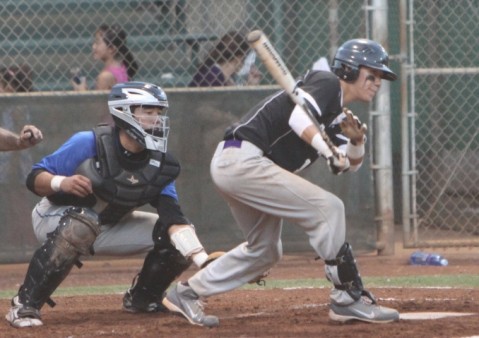 Kamalu Neal pictured hitting and RBI single down the right field line in the bottom of the first inning that scored Tyler Tokunaga from the third base. 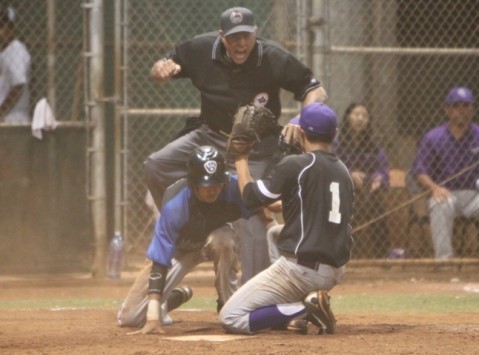 Tyler Tokunaga comes off the mound to block out and tag out Kekoa Kaulukukui in the top of the seventh inning.