Kamalu Neal made a statement from the mound on Tuesday as he led the defending state champion Pearl City Chargers to an opening round 5-1 win over the Maui Sabers in the 2012 Wally Yonamine Foundation State Baseball Championships played at Iolani High School.

Neal held the Sabers to 1 run on 2 hits with 2 strikeouts in 5 1/3 innings of work for the Chargers.

Pearl City's Tokunaga brothers had solid performances at the plate with Tyler Tokunaga hitting 2-3, with a triple and 2 runs scored and Tanner Tokunaga also hitting 2-3 with a double. Reid Akau went 1-3 with 2 RBI's.

Maui's Jacob Tiu led the Sabers with a 2-4 performance at the plate. Leon Abrew 1-3, Noah Keolanui-Kolish 1-3, 1 run also contributed in the loss to the Chargers.

Pearl City moves on to face ILH Champion and #2 seed Mid Pacific in a quarterfinal match up on Wednesday at Les Murakami Stadium with first pitch scheduled for 5:00pm.

Noah Derby got the Chargers on the scoreboard with a one out RBI double that scored Brock Honda from third base. Next battter Sumi Pruett popped out for the second out of the inning. Shaye Higa stroked an RBI double that scored Derby from second base. Higa attempted to stretch his double to a triple but got tagged out between second and third base.

In the top of the third inning the Chargers went up 3-0 on an RBI double by Reid Akau that scored Tyler Tokunaga from first base.

Leon Abrew led off the inning with a single. Next batter Noah Keolanui-Kolish reached first base on an infield single that moved Abrew to second base with no outs. Sabers starting pitcher Alistair Reynolds reached  first base on a bunt that forced out Abrew at third base on the play. Kamalu Neal walked the next batter Jordan Yaji-Kawaha to load the bases. Neal struck out Jacob Tiu for the second out. Mark Karaviotis stepped up to the plate with the bases loaded and was hit by a pitch that scored Keolanui-Kolish from third base. Neal got the third out on a groundout to end the inning.

The Sabers made a pitching change bringing in Noah Keolanui-Kolish from third base in relief of starter Alistair Reynolds with two outs in the inning.

Tanner Tokunaga led off the inning with a double to right field. Kamalu Neal walked putting runners on first and second. Brock Honda came in as a courtesy runner for Neal at first base. Sean Milan hit a bunt single to load the bases. Noah Derby hit a single that forced out Tokunaga at home plate. Honda scored on a pass ball at the plate. Sumi Pruett popped out for the second out. Next batter Shaye Higa struck out for the third out.

The Chargers made a pitching change bringing in Tanner Tokunaga from center field in relief of Kamalu Neal with one out in the inning.

Tyler Tokunaga blasted a triple off the center field fence with one out in the inning. Next batter Reid Akau hit an RBI bunt single that scored Tokunaga from third base. Akau reached second base on a steal. Tanner Tokunaga hit a single moving Akau to third base. Tokunaga took second base on a steal. Kamalu Neal flied out to left field for the second out. Sean Milan struck out to end the inning. 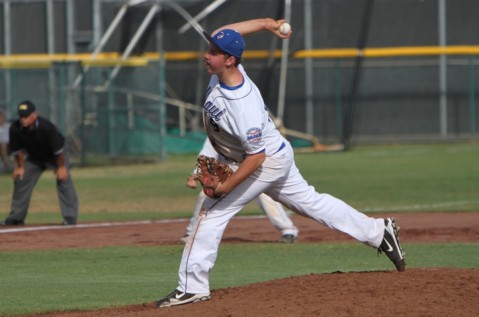 Reynolds pictured in the 4th inning against the Chargers. 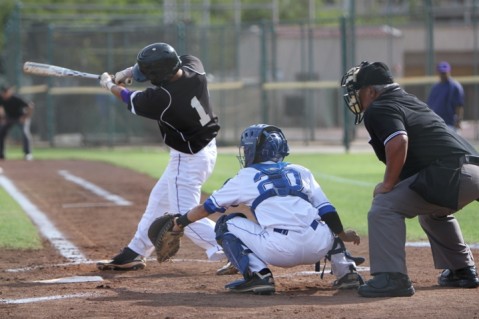 Tyler Tokunaga pictured stroking a single off of Maui's Alistair Reynolds in the top of the third inning.

Tokunaga would score from first base on a double by Reid Akau to put the Chargers up 3-0 over the Sabers. 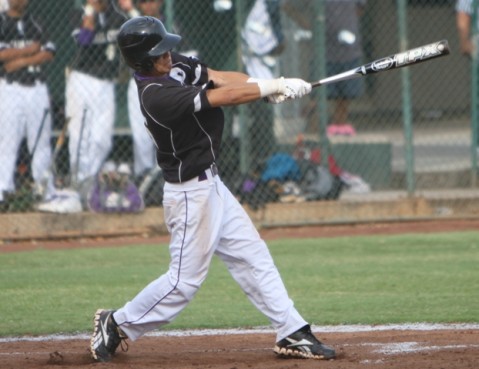 Tanner Tokunaga lifts a pitch to right field for a hit in the top of the fifth inning. 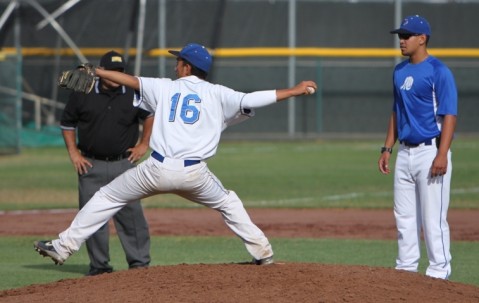 game in the top of the fourth inning in relief of starter Alistair Reynolds. 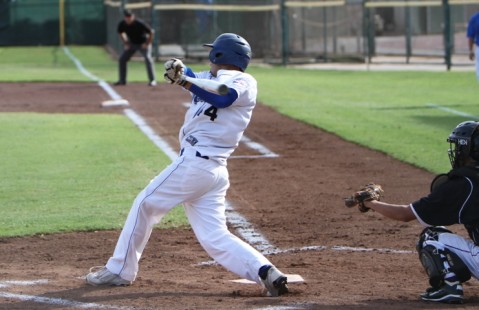 #44 Leon Abrew pictured leading off the bottom of the third inning with a single to centerfield.

with the bases loaded scoring Noah Keolanui-Kolish from third base.Abrew was forced out

at third base for the first out of the inning.