BIIF Champion Waiakea improved their record to a perfect 19-0 and a spot in tonight's state championship game with a 2-1 victory over defending state champion Pearl City last night in the semifinals of the Wally Yonamine Foundation Division I Baseball Championships. It will be an all neighbor island representation in the championship title game as MIL Champion and #4 seed Baldwin defeated Hilo 6-2 to earn a trip to face # 3 seed Waiakea in the championship scheduled for 7:00pm at Les Murakami Stadium.

In last night's game, Korin Medeiros was the hero for Waiakea with a game winning bottom of the seventh inning RBI single off of Pearl City reliever Sumi Pruett with the bases loaded that drove in pinch runner Matthew Camacho from third base to break a 1-1 tie.

Kodi Medeiros earned the win for the Warriors tossing seven innings while allowing one run on three hits with seven strikeouts.

Tanner Tokunaga took the loss for the Chargers in relief of starter Reid Akau who pitched 5 2/3 innings allowing one run on five hits.

Dave Camacho beat out the throw at first base to lead off the inning. Camacho advanced to second base on a sac bunt by Reyn Kihara. Next batter Kylen
Uyeda grounded out to third base. Robbey Meguro hit an RBI triple to right field with two outs scoring Camacho from second base. Reid Akau got the next batter to groundout for the third out leaving Meguro on third base.

Sumi Pruett led off the inning with a hard hit single to center field. Matt Tsutomi hit a sac bunt that moved Pruett into scoring position at second base. Next batter Jason Komoda reached first base after being hit by a pitch. Jordan Mendiola came in to pinch run for Pruett at second base. Tyler Tokunaga stroked a single to load the bases. Warrior pitcher Kodi Medeiros struck out Reid Akau for the second out. Medeiros walked Mendiola from third base to tie the game at 1-1. Kamalu Neal grounded out for the third out.

Rylan Kawazoe walked to lead off the inning. Next batter Quintin Torres-Costa pushed Kawazoe to second on an infield single. Both runners advanced on a pass ball at home plate. Matthew Camacho came into the game to pinch run for Kawazoe at third base. Pearl City pitcher Tanner Tokunaga walked Kean Wong to load the bases.The Chargers made a pitching change bringing in Sumi Pruett from first base. Tokunaga moved out to center field. Next batter Korin Medeiros lined a game winning RBI single over the reach of Chargers shortstop Tyler Tokunaga into left field that scored Matthew Camacho from third base. 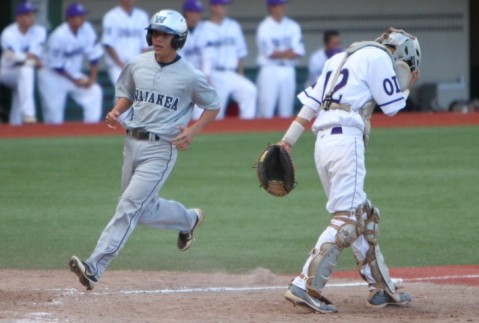 Warriors pinch runner Matthew Camacho scores the winning run from third base in the bottom of the seventh inning on an RBI single by Korin Medeiros with the bases loaded and no outs. 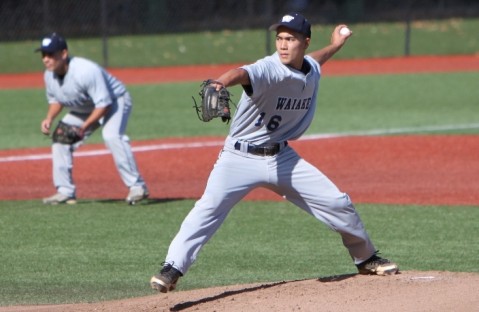 Kodi Medeiros earned the win for the Warriors holding the Chargers to three hits while striking out seven in seven complete innings. 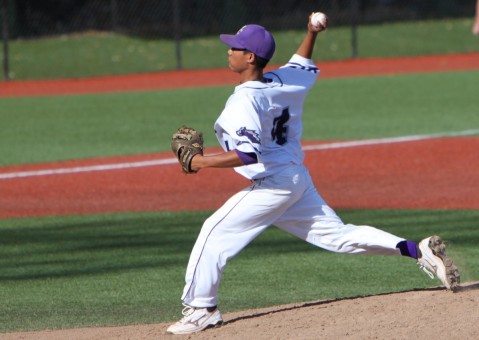 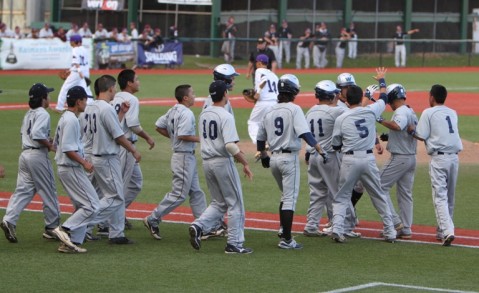 The Warriors rush onto the field to congratulate teammate Korin Medeiros after his game winning RBI single in the bottom of the seventh inning that scored Matthew Camacho from third base.