Submitted by the PCHS Drama Department:

The Pearl City High School Drama Department under the direction of Mr. Steven H.Y. Kam has been selected to perform in the world’s largest and most prestigious arts festival in the world as part of the American High School Theatre Festival (AHSTF). Each August, Edinburgh, Scotland becomes the most magical and exciting place on earth as performing artists from all over the world come to Scotland to take part in the Edinburgh Fringe Festival. The whole city becomes a stage and visitors can view performances everywhere from playgrounds to conference rooms to city parks to churches. The Fringe Festival includes over 1,800 performances of music, theatre, dance, and comedy during its three week run. Pearl City High School’s performance will be showcased at the AHSTF venue in Edinburgh.

Pearl City High School, long recognized for its entertaining and innovative productions, was selected by the AHSTF Board of Advisors to represent the United States as part of the 2013 AHSTF program. The Board reviews all completed applications and identifies the top high schools based on their most recent bodies of work, awards, community involvement, philosophies, and recommendations.

While in Scotland, AHSTF’s professional technical team ensures that the company’s lighting, sound, and property needs are addressed. WorldStrides of Charlottesville, Virginia, the nation’s oldest and largest student travel company will be planning the travel arrangements for each high school group.

As you can imagine, Pearl City High School drama students, their parents, and teachers are heavily involved in fundraising activities to finance their two-week adventure to Scotland and England. Contributions and donations are welcome and more information is available from Mr. Steven H.Y. Kam, Pearl City High School Drama Director at (808) 398-9880 or <pchskam@hawaiiantel.net>.

Heart for the Arts, a fundraising variety revue show was originally put together by Wainani Paikai (c/o 2010) and Christina Uyeno (c/o 2010), is a vehicle or showcase created in efforts to keep the Pearl City High School Dramatic Arts program alive. This will be the 6th Hearts for the Arts. Both the Winter/Spring and the Summer concert benefits also give the PCHS drama students and alumni an opportunity to perform in a variety of roles, giving them valuable experience while entertaining family and friends. It's a great experience for everyone, as there is singing, dancing, acting, skits, and other miscellaneous performing arts showcases.

General Admission is $10.00, with an additional $10.00 donation. This summer, there will be 4 performances:

Tickets can be purchased at the door or at participating vendors. 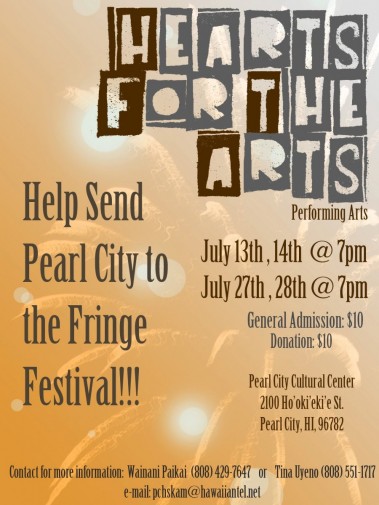