Breault held Pearl City bats to two hits as MKH dropped Pearl City into the losers bracket of the double elimination tournament with an 11-1 win that ended in the bottom of the fourth inning due to the 10-run mercy rule.

It was a complete reversal for Pearl City who beat Waialua on Wednesday 11-1 via the same 10-run mercy rule. MKH has outscored their opponents 37-3 in two games played so far in the tournament.

MKH pounded out nine hits against Pearl City in the win. Alihikaua Rodrigues started on the mound for Pearl City before being relieved in the bottom of the third inning by Jzayven Moreno.

MKH moves on to play Nanakuli today at 3:00pm at CORP. Nanakuli defeated Waipio 4-3 on Thursday. Pearl City will play Ewa at 9:00am. The winner of Thursday's loser bracket match up between Waipahu and Waialua will take on Waipio at 12:00pm.

Pearl City took a 1-0 lead on a solo homerun to left field by Alihikaua Rodrigues.

MKH broke the game wide open in the bottom of the third innng scoring nine runs to take a 9-1 lead. Keith Torres started the inning off with a single to left field off of Pearl City starting pitcher Alihikaua Rodrigues. Next batter Hunter Breault walked putting runners on first and second with no outs. Runners advanced to second and third on a pass ball at the home plate. Next batter Roy Clemons got hit by a pitch to load the bases. Noja Ramiscal came in the game to pinch run for Clemons at first base. Jacob Filio popped up to Carter Hirano at shortstop for the first out of the inning. Isaac Badua reached first base safely scoring Torres from third base on the play to tie the game at 1-1. Bradyn Yoshida hit an RBI single that scored Breault from third base. Andrei Stoyanow hit an RBI single to right field that scored Ramiscal from third to put MKH up 3-1. Chanson Aki grounded out scoring Badua from third. 4-1 MKH. Rodrigues walked Chance Beyer to load the bases. Yoshida scored from third on a pass ball at the plate. 5-1 MKH. MKH lead off batter Keith Torres stepped up to the plate for the second time in the inning and hit a 2 RBI double that scored Stoyanow and Beyer. MKH 7-1. Next batter Breault drove in Torres from second base on an RBI double to left field. MKH 8-1. Pearl City made a pitching change bringing Jzayven Moreno in relief of Rodrigues. MKH went up 9-1 on an RBI double by Roy Clemons that scored #12 from second. MKH ended the inning leaving one runner on base.

In the bottom of the fourth inning Adam Berg walked to lead off the inning. Next batter Corey Slade hit an infield single putting runners on first and second. Andrei Stoyanow walked to load the bases with no outs. Garrett Wong struck for the first out of the inning. Next batter Milton Gainey drove in Berg and Slade for runs 10 and 11 to force the 10-run mercy rule. Final 11-1. 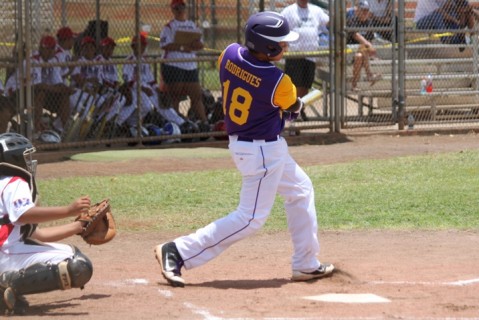 Alihikaua Rodrigues powers a solo homerun shot over the left field fence to give Pearl City a 1-0 lead in the top of the second inning. 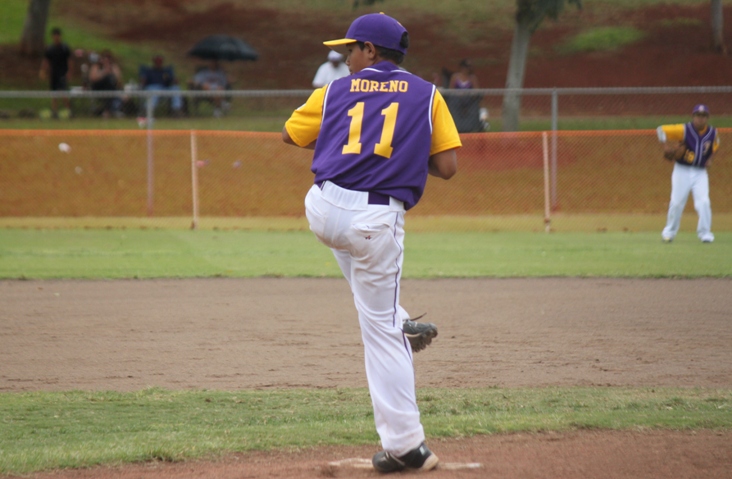 Jzayven Moreno pictured in relief for Pearl City in the bottom of the third inning. 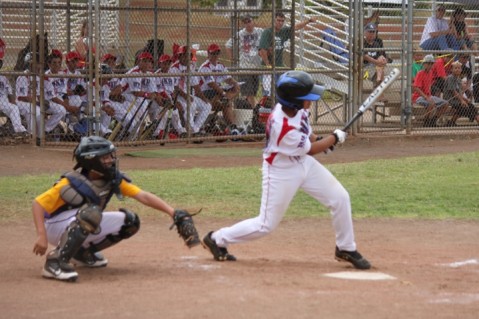 Milton Gainey pictured driving in Adam Berg and Corey Slade for runs 10 and 11 to force the 10-run mercy rule in the bottom of the fourth inning. 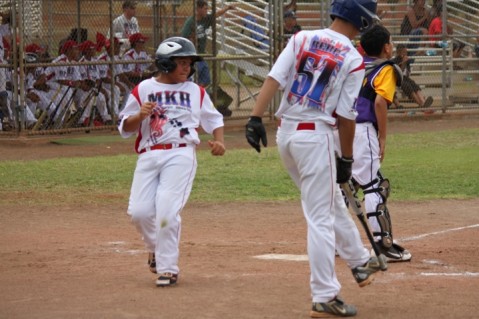 Corey Slade crosses home plate for the game winning run in the bottom of the fourth inning.